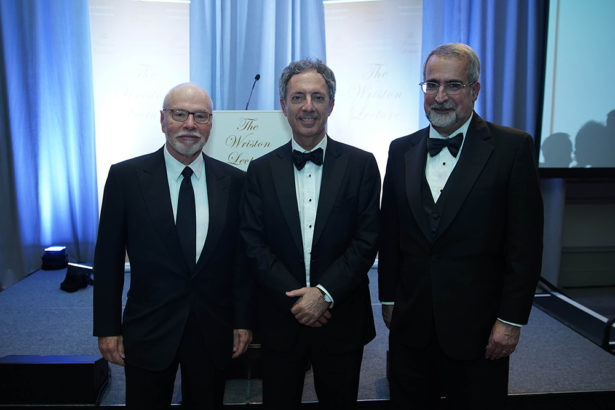 Politico reports that the State Department’s new head of policy planning will be longtime Israel partisan and neocon Peter Berkowitz. According to Politico, the position “puts him in charge of long-term strategic thinking for the department.”

Politico reports that the announcement “came in an internal email to select State Department officials on Monday morning.” Berkowitz will specifically be in charge of the State Department’s Office of Policy Planning.

Berkowitz is extremely close to Israel. He received an M.A. degree from Israel’s Hebrew University in 1985, and currently teaches for the Tikvah Fund in Israel. He is the Co-founder and Director of the Israel Program on Constitutional Government, located in Tel Aviv. He has been on the advisory committee for the Center for Jewish Political Thought, a section within Israel’s Shalom Hartman Institute. Berkowitz has been the Tad and Dianne Taube Senior Fellow at the Hoover Institute (the Taubes donate to numerous Israeli organizations) and is on the faculty of the Hertog Foundation.

Berkowitz has written numerous articles about Israel, often for the neoconservative outlet, Weekly Standard. His fellow neocon, Stanley Kurtz, credits Berkowitz with causing South African jurist Richard Goldstone to recant after leading a fact-finding investigation whose findings Israel disliked. The investigation had determined that Israel had committed numerous war crimes in Gaza. The report’s findings were corroborated by a number of other investigations that found Israel had violated international law.

Berkowitz’s contention flies in the face of documentary evidence compiled by Human Rights Watch, Amnesty International, Christian Aid, B’Tselem (also see this), the International Red Cross, Physicians for Human Rights, Reporters Without Borders, Foreign Service Journal, and even the U.S. State Department. According to Berkowitz, all of these agencies are wrong.

Berkowitz also penned a piece attacking Harvard Professor Stephen Walt and University of Chicago Professor John Mearsheimer for their essay in the London Review of Books and Harvard working paper about the Israel lobby. Berkowitz accused the professors of “myriad half-truths, gross distortions, ignorant assertions, and defective reasoning.” Mearsheimer and Walt’s findings were later published in a book by Farrar, Straus and Giroux, The Israel Lobby and U.S. Foreign Policy.

Trump had initially opposed neocons and kept them out of his administration. Although neocons are nominally Republicans, many had endorsed Hillary (and many now remain, at least on the surface, Democrats). As Trump came under escalating attack, however, he moved ever closer to billionaire campaign donor Sheldon Adelson (who funds many neocon enterprises) and eventually began naming neocons to positions of power, where they often drive policy.

Neocons in the Bush Administration promoted the disastrous war with Iraq, and Israel and its partisans are central in the demonization of Iran that has resulted in the sanctions against Iran and threats of still worse.

Alison Weir is executive director of If Americans Knew, president of the Council for the National Interest, and author of the best selling book Against Our Better Judgment: The Hidden History of How the U.S. Was Used to Create Israel.

Neoconservatives: The People Who Pushed for War

A War for Israel

Documentary about the Israel lobby