You Are Here: Home → Israel’s military courts for Palestinians make a mockery of justice

Israel’s military courts for Palestinians make a mockery of justice 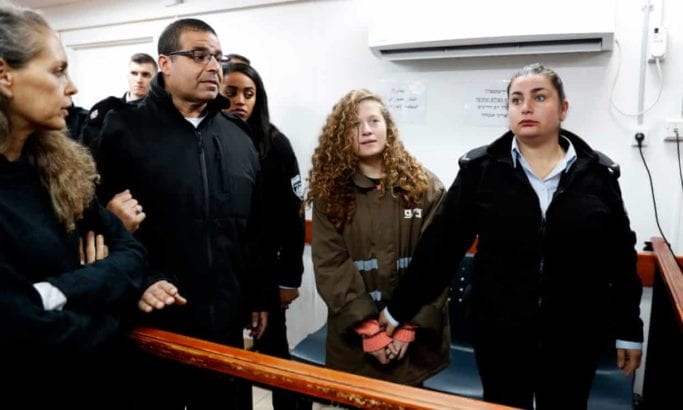 New report from UK charity War on Want shows how integral Israel’s military court system is in controlling Palestinian lives – a system that is apartheid in nature and violates international law.

by Sahar Francis, reposted from the Guardian, March 6, 2021

NOTE: While this report ends with a call for Britain to intervene on behalf of Palestinian justice, the US bears a great deal of the responsibility for Israel’s ongoing impunity. If Americans Knew works to inform Americans especially of the part our tax dollars play in the subjugation and ethnic cleansing of Palestinians. $10 million a day in military aid with no strings attached enables Israel to continue its atrocities.

If you are unfamiliar with the issue, you may want to go here for an introduction, or watch this video.

The overwhelming majority of Palestinians in the West Bank were born into, and have spent their entire lives under, an Israeli military occupation that violates their right to self-determination. A new report by the UK charity War on Want exposes how a core part of what sustains that occupation is a military judicial system characterised by violations of international law.

The report – Judge, Jury and Occupier – is a deep dive into the diverse ways in which Palestinians’ rights are being violated – from arrest, through interrogation, conviction and jail time. It reflects the experiences of Palestinian lawyers and human rights groups. The prisoners’ rights organisation I lead, Addameer, was proud to contribute evidence.

One of the report’s important contributions is to make clear that, despite the Oslo accords and establishment of the Palestinian Authority (PA) for Palestinians in the West Bank, there has been, and remains, no escape from Israel’s military court system.

Regardless of the existence of the PA penal code and judiciary, which operate with limited autonomy in parts of the occupied territory, all Palestinians, wherever they reside in the West Bank, remain subject to the jurisdiction of Israel’s military courts if they fall foul of certain laws.

The impact of this military judicial system is far-reaching, and profoundly discriminatory.

Since 1967, for example, Israel has decreed more than 411 Palestinian organisations illegal, including all the major Palestinian political parties. Palestinian civilians are then prosecuted for “membership and activity in an unlawful association”, a key tool in Israel’s repression of anti-occupation activism.

Public order offences, meanwhile, include the charge of “incitement”, defined as any attempt “to influence public opinion … in a manner which may harm public peace or public order”. Palestinians can also be detained for “bringing into hatred or contempt, or the exciting of disaffection against” authorities.

Other charges heard by the military courts include being in Israel illegally – that is, those caught looking for work without a permit – as well as traffic violations. The latter accounts for some 40% of all Palestinians brought before the military courts each year.

The Israeli military court system is part of a “separate and unequal” reality. In contrast to Palestinians, Israeli settlers arrested in the West Bank are tried in civilian courts inside Israel. Two populations, two different legal systems – Israel’s largest human rights group is therefore right to call this a form of apartheid.

Within this wider discriminatory system, there are specific and serious violations of international law.

One such violation is torture, a method that the report documents is used routinely, along with other cruel and degrading acts, to extract confessions from Palestinians during interrogations (access to a lawyer can be denied for up to 60 days). These confessions are then used as the primary evidence to secure convictions in the military courts.

One example of many is Tariq, a school counsellor arrested in 2019 for allegedly being a member of a proscribed organisation; his ordeal included beatings, stress positions and verbal abuse. Another transgression of the law concerns the fact that most Palestinian prisoners are held in prisons within Israel, despite the fourth Geneva convention’s prohibition of the transfer of prisoners from the occupied territory into the occupying state.

All of this occurs within a system that – as I know from my own years of experience defending people in the military courts – cannot be “reformed” but rather must be abolished.

Any occupying power is obliged to act in the interests of the occupied population; Israel, by contrast, is violating Palestinians’ civil and political rights. In addition, as UN special rapporteur Michael Lynk has laid out, after half a century, Israel’s “role as occupier … has crossed a red line into illegality”.

UK has been part of the problem

Britain has a particular role, and responsibility. An important element of Israel’s military rule in the occupied West Bank is the Defence (Emergency) Regulations enacted by the British mandate in Palestine in 1945. Today, the UK government approves the sale of weapons, components and military technology to Israel, as well as imports of Israeli-made military technology.

The report thus calls for the UK government to implement a two-way arms embargo, and also urges the government to increase support for Palestinian human rights defenders and organisations.

Applying meaningful pressure on Israel to end its occupation and military court system is the necessary response to a historical wrong and a present injustice. For the Palestinian men, women and children subjected to a Kafkaesque denial of their liberty this is not just necessary, it is urgent.