You Are Here: Home → Israel arrests Palestinian politicians ahead of PA elections 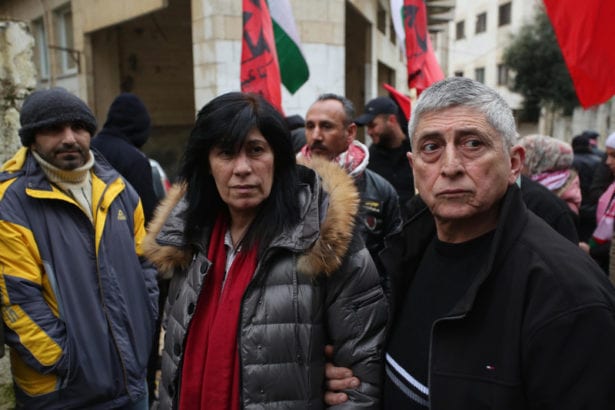 Lawmaker Khalida Jarrar is one of the many Palestinian politicians arrested for her political activities. (Pictured: Jarrar is released from her previous stint in Israeli prison, 28 February 2019.)

As Palestinian elections gear up, Israel has been arresting Palestinian politicians in an attempt to suppress Palestinians’ exercise of political sovereignty and self-determination.

NOTE: The Guardian reports that Since 1967…Israel has decreed more than 411 Palestinian organisations illegal, including all the major Palestinian political parties. Palestinian civilians are then prosecuted for “membership and activity in an unlawful association”, a key tool in Israel’s repression of anti-occupation activism. Read the full article on the Israeli court system for Palestinians here.

With Palestinian legislative and presidential elections set to take place in coming months, Israel is intensifying its crackdown on Palestinian political and civil society figures in the occupied West Bank.

On Monday, Israel sentenced Palestinian lawmaker Khalida Jarrar to two years in prison, a $1,200 fine and a suspended sentence of one year.

Her crime? Being a member of the leftist political party the Popular Front for the Liberation of Palestine.

Israel considers virtually all Palestinian parties and resistance organizations to be “terrorist” groups, meaning that any politically active person can be targeted for arrest.

Khalida Jarrar was arrested during a large military night raid on her home in October 2019, and has been held without charge or trial ever since.

Her detention came only eight months after her release from a previous 20-month period in administrative detention – without charge or trial.

My mom, Khalida Jarrar, was arrested from our house in Ramallah moments ago. Isreali occupation forces raided our home with over 70 soldiers and around 12 military vehicles. Mom and sister were asleep when they approached. #freekhalidajarrar #IsraeliCrimes #Israel #BDS pic.twitter.com/njPyi6ze3a

She was arrested as part of what Palestinian prisoners rights group Addameer said was an Israeli campaign targeting political activists and students in the second half of 2019.

Shnerb was killed by what the Israeli military said was an improvised explosive device near the Dolev settlement in the West Bank in August 2019.

But the Israeli military prosecutor on Monday changed the indictment against Jarrar to only include her political activities, and she was not charged with any involvement in Shnerb’s killing.

Jarrar has previously spent years in Israeli prisons and has been banned from traveling because of her membership in the PFLP.

Palestinian legislative and presidential elections slated for May and July would be the first since the legislative elections of 2006, when Hamas won by a landslide.

It beat out Fatah, the ruling faction of the Palestinian Authority led by Mahmoud Abbas.

However, Abbas’ party, backed by Israel, the United States, the European Union and some Arab states, did not allow Hamas to govern the Palestinian Authority.

Instead, Fatah-aligned militias in Gaza, working with the United States, tried to remove Hamas from power by force.

But in June 2007, Hamas moved against them preemptively, expelling US-backed Fatah forces from Gaza.

The attempted putsch against Hamas after it won the elections resulted in the current division, where Abbas’ Western-backed PA kept control in the West Bank, while the internationally isolated Hamas has ruled the interior of the besieged Gaza Strip.

There is no guarantee that elections will take place, as numerous votes have been scheduled in recent years and then postponed indefinitely.

Elections are largely seen as a way to reinforce the legitimacy of the main Palestinian political parties 15 years after the last vote and in light of the new US administration.

As The Electronic Intifada’s Ali Abunimah recently wrote, it is unclear why Hamas would trust the same Abbas and Fatah party that led the coup against Hamas in 2007 to respect results now.

“Any reconciliation or ‘national unity’ can only be based on Abbas’ Fatah abandoning collaboration with Israel, or Hamas abandoning resistance,” Abunimah wrote.

Israel has regularly imprisoned Palestinian elected officials just because it doesn’t like their views, and is now accelerating such arrests ahead of the scheduled elections.

This is done as “part of an ongoing Israeli effort to suppress Palestinians’ exercise of political sovereignty and self-determination,” Addameer stated.

Israel has been conducting sweeping arrests of Hamas figures in the occupied West Bank in recent weeks.

Mansour is also a member of the Palestinian Legislative Council.

Hamas said the arrest of its politicians in the West Bank “confirms the occupation’s targeting of the elections process.”

Naif al-Rajoub, a member of the Palestinian Legislative Council, said Israeli occupation forces raided his home in February and warned him against participating in the elections.

Al-Rajoub told Shehab News Agency that Israeli forces warned him not to run in elections or participate in campaigns, and only permitted him to go to the polls.

An Israeli military court last week extended the administrative detention of Khitam Saafin, the head of the Union of Palestinian Women Committees, by four months.

Saafin was arrested with other Palestinian political activists in November, and has been held without charge or trial ever since.