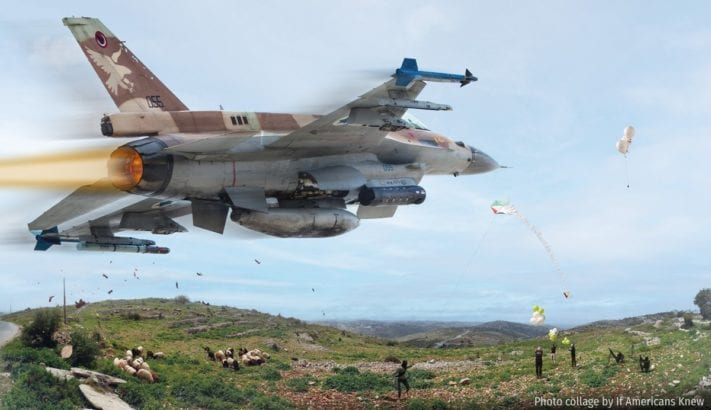 Photo collage created by If Americans Knew of Israeli F-16 fighter jet, and Palestinian incendiary balloons, kite, and rocket launchers to show the relative sizes of these weapons systems.

U.S. taxpayers give Israel over $10 million per day, making it essential that we be fully informed on Israeli actions… yet much important information is frequently omitted from US news coverage, including the vast difference in weaponry used in the “Israel-Hamas wars”

Yet, many Americans are led to believe that the Israeli military and Palestinian resistance groups are equally powerful.  (In fact, some media even give Americans the impression that Palestinian groups are the more fearsome party, and media programs frequently feature Israel partisans in broadcasts.)

NPR’s Morning Edition broadcast was less dramatic, but spoke of “both sides,” and spent most of the time on an interview with an Israeli analyst discussing the new Israeli government almost as though the program was covering domestic U.S. politics.

On May 24th Brooke Goldstein, founder and director of the pro-Israel Lawfare Project, was featured on Fox’s “Kennedy” show. Goldstein, a frequent guest on Fox programs, says, “There’s no such thing as a Palestinian person.” (Fox, like the other networks, virtually never mentions that the state of Israel was established in 1948 through a war of ethnic cleansing against the indigenous Palestinian Muslims and Christians.)

Recently, in Israel a columnist for an Israeli news site opined that Israel’s airstrikes on Gaza were “too little and too late” and that fighter jets should have been scrambled after the launching of just one helium balloon from Gaza.

Few if any news reports described the weapons in detail, compared their relative lethality, or discussed the massive disproportionality of scrambling high tech war planes in retaliation to small, hand-launched helium balloons that drift on the wind (some of the time) toward Israel.

If these incendiary balloons are as dangerous as Israel and U.S. media make them out to be, one wonders why Israel doesn’t retaliate by simply launching such balloons itself? After all, they require massively less money than warplanes.

Below we’ll look at the Israeli military’s airstrike weapons (keep in mind that American taxpayers’ over $10 million per day to Israel fund these weapons), followed by an examination of Palestinian airstrike weapons.

According to the UK Independent, Israel’s May bombing of Gaza utilized F-35 and F-16 war planes. Additional aircraft and weaponry have also often been used against Gaza.

Israel also has a fleet of F-16s that it has frequently deployed against Gaza’s population. The Britannica describes the capabilities that allow F-16s to drop bombs with “precision accuracy:

“A computerized “fly-by-wire” stabilizing system issues continuous commands to control surfaces in the tail and wings, and a “heads-up-display” instrumentation system projects flying and combat data onto a transparent screen in front of the pilot. In addition, a highly sophisticated bomb-aiming system, using a laser range-finder and high-speed digital data processing, permits ordinary “dumb” bombs to be dropped with precision accuracy from low altitudes. Such structural and electronic innovations made the F-16 a highly capable and versatile aircraft.

F-15: First fighter to exceed the speed of sound in vertical flight

US Military News reports that the F-15 is “among the most successful modern fighters, with over 100 victories and no losses in aerial combat, with the majority of the kills by the Israeli Air Force.”

F-35s are among the world’s most devastating war planes, as reflected in Israel’s nickname for the F-35: Adir, Hebrew for “Mighty.” According to Aerotime Hub, the F-35 is the world’s most advanced weapon platform.

“It contains an incredible fusion of advanced sensors, stealth, electronic warfare, and networking capabilities. The U.S. spent over $1.5 trillion dollars developing this plane, making it the most expensive weapon platform ever. It also made it the most advanced one.”

Real Engineering agrees. It reports that the F-35 is the “most expensive weapons system in the history of humankind,” and calls it “a fascinating plane with astounding capabilities.”

The F-35s, made by American firm Lockheed Martin, are modified by Israel to be even more lethal. Below is a Lockheed video showcasing the warplanes:

In addition to the above, Israel has Apache Helicopter gunships, “designed to be lethal killing machines,” considered the world’s “deadliest attack helicopter“:

In addition, Israel has drones, known as “Israel’s killer robots;” a Navy with diverse warships, including nuclear-armed submarines; and powerful ground forces that deploy some of the most lethal equipment on the planet, including one of the world’s most powerful tanks, the Merkava, a “72-ton giant.”

Keep in mind that Gaza is known as the “biggest open air prison in the world“. Over 70 percent of the largely poverty-stricken population consists of families whose ancestral land and homes were confiscated by Israel. Sderot, perhaps the Israeli town most impacted by rockets, was built on top of the ethnically cleansed Palestinian village of Najd, whose inhabitants fled to Gaza.

Added to this, it is important to remember that Gaza has been under a suffocating siege for 14 years, causing malnutrition in children and massive unemployment.

In 2019 the desperate population rose up in with what was called “The Great March of Return.” For over a year, thousands of men, women, and children participated in weekly unarmed demonstrations. Israel deployed snipers, killing and injuring hundreds of participants. (A PBS-BBC documentary on the march was suppressed and never broadcast in the U.S.)

These are helium balloons to which a burning rag or gas canister has been tied. They are launched by hand. Their mode of transport is the wind, when it’s available.

The balloons have not killed anyone.

In fact, it appears that they haven’t even injured anyone. However, in some cases they’ve caused fires: Israeli media report that recently balloons ignited “20 blazes — mostly small brush fires.”

In 2018 some Palestinians taking part in the Great March of Return began flying kites that had burning rags or bags containing such items as charcoal and sugar attached to their tails. Gazans have called this “the Kite war.”

In the video below, Palestinians protesting along the Gaza border attach Molotov cocktails to kites to fly over the fence toward Israel. This took place on about April 18th, as the Great Return demonstrations entered their fourth week.

Below is a video reporting what had preceded this action:

In May Defense Minister Avigdor Lieberman vowed that “kite terrorism cannot continue,” and in June Israel launched a strike against Gaza by Israeli warplanes in what it said was a “response to arson and explosive kites and balloons that have been launched into Israel.” 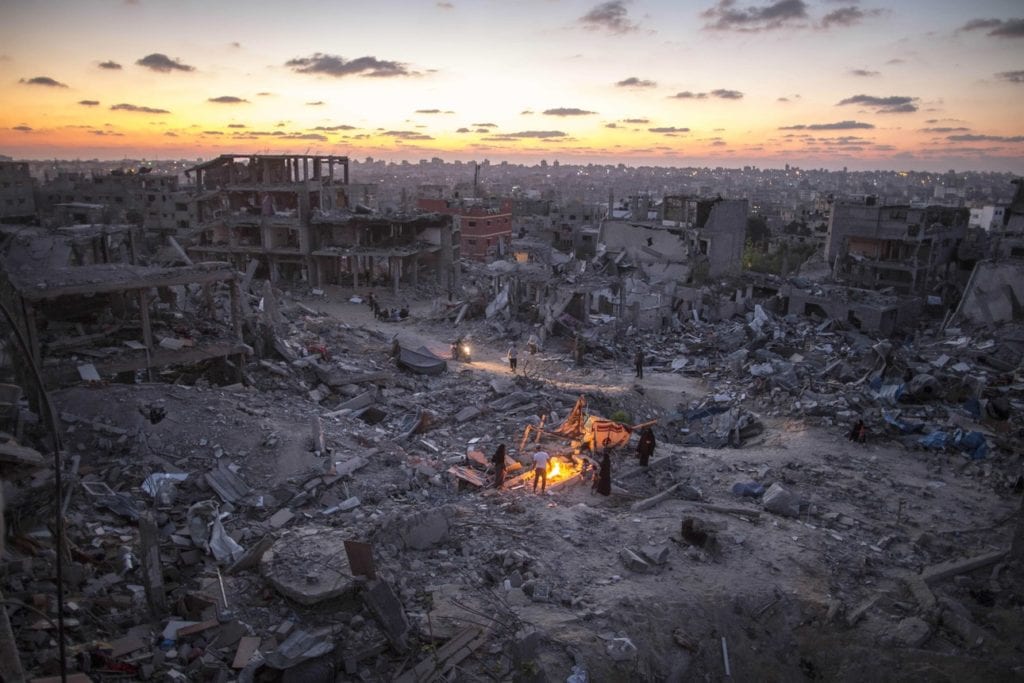 As Forbes reported about the May conflict: “What is actually going on is a struggle between very high-tech and very low-tech forces, pitting state-of-the-art Israeli systems against simple home-made rockets.”

Forbes reports that Qassam is the name of the rockets made by Hamas.

The rockets are locally produced, the main component being the body, which is a length of steel or aluminum piping with fins welded on to it. This is filled with rocket fuel made by mixing fertilizer with melted sugar. The rocket is fitted with a warhead of home-made explosive, and the detonator added.

As Forbes notes: “They are extremely inaccurate and can only be fired in the general direction of the target; hitting anything is a matter of luck rather than judgement.”

The original version was about six feet long and weighed eighty pounds with an eighteen-pound warhead, but only had a range of two miles. The biggest now weigh more than a hundred pounds – still small enough to be set up and launched by two men — and has a range of over twenty miles. However, even these are much smaller than the Tamir missiles intercepting them, and cost just a few hundred dollars.

A 2020 Israeli documentary describes Gaza’s rockets as “made from stolen metal street poles…a pipe as wide as a Coca-Cola bottle…just a piece of flying metal” stuffed with fertilizer that Gazan Palestinians dried on their roofs… the rockets may cost $100 each to manufacture (and incendiary balloons much less).

Forbes reports that resistance groups also have limited supplies of 122mm Grad rockets. “These are also fired individually from the ground rather than from vehicles.” The video clips below show Gaza fighters launching rockets:

Rockets were first launched from Gaza in 2001, after Israeli forces had shelled and invaded Gaza (photos here), killing 570+ Palestinians in the previous six months. In all the time they’e been used, rockets have killed a total of 39 Israelis, while Israeli airstrikes have killed over 4,000 Gazans.

U.S. media also sometimes mention Palestinian mortars, but fail to report that over the years these have killed approximately 20 Israelis. The following video clips show their use by Gazan resistance members:

The video below shows how Israeli forces launch projectiles against Gazans:

On a number of occasions, Israeli tanks have fired at and killed Gazan farmers as they worked in their fields.

On May 21 and after, virtually all the media – from CNN’s Wolf Blitzer, Anderson Cooper, and Don Lemon to Fox News programs to the New York Post and others – featured graphic reports of Palestinian activists allegedly attacking Jews.

However, it turns out that these reports, as is often the case with accusations of “antisemitism,” were extremely questionable. Author Max Blumenthal, himself Jewish, investigated the incidents and writes in a must-read report:

Having failed to successfully defend massacres of entire families in their homes and the deliberate demolition of civilian residential towers and media offices in Gaza City, the US Israel lobby and the Israeli government it advocates for have manufactured an epidemic of antisemitic violence with the goal of portraying American Jewry as the true victim of the crisis.

Led by the Anti-Defamation League (ADL), Israel lobbyists have portrayed a series of street scuffles between supporters of Palestine and pro-Israel activists as anti-Jewish pogroms. In nearly every case, no evidence exists to substantiate claims that Jews were targeted as Jews for violent assault. There is ample proof of deception, however, as video and photographic evidence reveals pro-Israel elements provoking demonstrators, initiating violence and falsifying or embellishing their testimonies.

Statistics, and the human dimension

Below is the reality that years of Israel-centric reporting and false claims of “antisemitism” cover up: 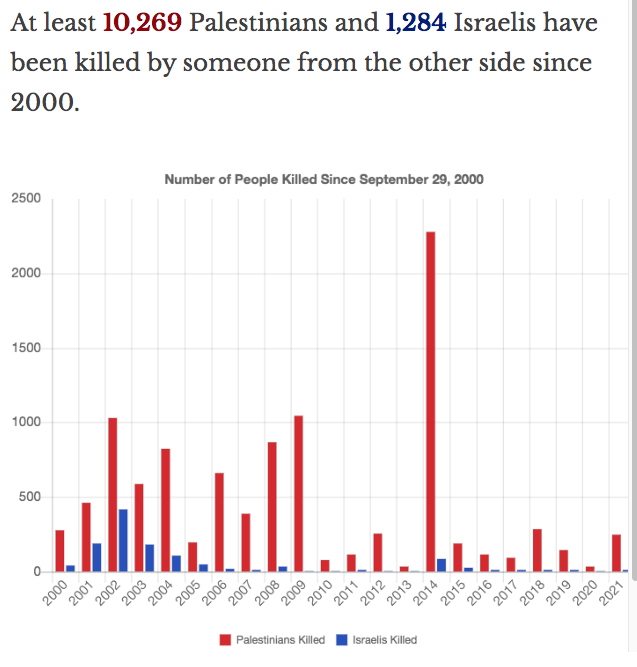 Perhaps the least reported aspect of this issue is the pro-Israel lobby’s major, perhaps decisive role in procuring U.S. policies of support for Israel. It is these American policies, perpetrated by both major political parties, that enable Israeli actions. In addition to causing untold tragedy in the Middle East, these policies cause escalating hostility to the United States.

This special interest group consists of hundreds of groups throughout the United States that advocate for and give cover to Israel.

U.S. politicians vote to expend over $19 million per day of American tax money on behalf of Israel.

It is time for this to stop.

To give your opinion to your Congressional representatives go here.

Sheldon Adelson and his wife Miriam have been top donors to Republican politicians: