You Are Here: Home → The Scofield Bible: The Book That Made Zionists of America’s Evangelical Christians

The Scofield Bible: The Book That Made Zionists of America’s Evangelical Christians 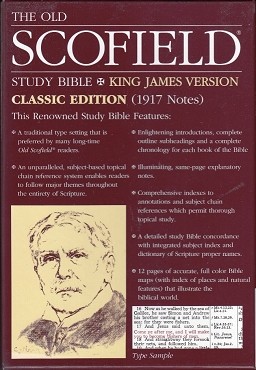 More than any other factor, it is Scofield’s notes that have induced generations of American evangelicals to believe that God demands their uncritical support for the modern State of Israel.

There are indications that Zionist attorney Samuel Untermeyer used Scofield, a Kansas City lawyer with no formal training in theology, to inject Zionist ideas into American Protestantism… Untermeyer and other wealthy and influential Zionists whom he introduced to Scofield promoted and funded the latter’s career, including travel in Europe…

By Maidhc Ó Cathail, reposted from the Washington Report on Middle East Affairs

Since it was first published in 1909, the Scofield Reference Bible has made uncompromising Zionists out of tens of millions of Americans. When John Hagee, the founder of Christians United for Israel (CUFI)*, said that “50 million evangelical bible-believing Christians unite with five million American Jews standing together on behalf of Israel,” it was the Scofield Bible that he was talking about.

Although the Scofield Reference Bible contains the text of the King James Authorized Version, it is not the traditional Protestant bible but Cyrus I. Scofield’s annotated commentary that is problematic. More than any other factor, it is Scofield’s notes that have induced generations of American evangelicals to believe that God demands their uncritical support for the modern State of Israel.

Central to Christian Zionist belief is Scofield’s commentary (italicized below) on Genesis 12:3: “‘I will bless them that bless thee.’ In fulfillment closely related to the next clause, ‘And curse him that curseth thee.’ Wonderfully fulfilled in the history of the dispersion. It has invariably fared ill with the people who have persecuted the Jew—well with those who have protected him. The future will still more remarkably prove this principle.”

Drawing on Scofield’s rather tendentious interpretation, Hagee claims, “The man or nation that lifts a voice or hand against Israel invites the wrath of God.”

But as Stephen Sizer points out in his definitive critique, Christian Zionism: Road-map to Armageddon? : “The promise, when referring to Abraham’s descendants, speaks of God blessing them, not of entire nations ‘blessing’ the Hebrew nation, still less the contemporary and secular State of Israel.”

Notwithstanding this more orthodox reading, The New Scofield Study Bible, published by Oxford University Press in 1984, intensified Scofield’s interpretation by adding, “For a nation to commit the sin of anti-Semitism brings inevitable judgement.”

“Sustained by a dubious exegesis of selective biblical texts,” Sizer concludes, “Christian Zionism’s particular reading of history and contemporary events…sets Israel and the Jewish people apart from other peoples in the Middle East…it justifies the endemic racism intrinsic to Zionism, exacerbates tensions between Jews and Palestinians and undermines attempts to find a peaceful resolution of the Palestinian-Israeli conflict, all because ‘the Bible tells them so.’”

In his 2008 book, The Rise of Israel: A History of a Revolutionary State, Jonathan R. Adelman describes the crucial support Israel receives from Christian fundamentalists as “totally fortuitous.” That assertion is belied, however, by the incredible career of the man who wrote “the Bible of Fundamentalism.”

Two years after Scofield’s reported conversion to Christianity in 1879, the Atchison Patriot was less than impressed. Describing the former Atchison resident as the “late lawyer, politician and shyster generally,” the article went on to recount a few of Scofield’s “many malicious acts.” These included a series of forgeries in St. Louis, for which he was sentenced to six months in jail.

Being a “born again” preacher did not preclude Scofield from becoming a member of an exclusive New York men’s club in 1901, either. In his devastating biography, The Incredible Scofield and His Book, Joseph M. Canfield suggests, “The admission of Scofield to the Lotus Club, which could not have been sought by Scofield, strengthens the suspicion that has cropped up before, that someone was directing the career of C.I. Scofield.”

That someone, Canfield suspects, was associated with one of the club’s committee members, the Wall Street lawyer Samuel Untermeyer. As Canfield intimates, Scofield’s theology was “most helpful in getting Fundamentalist Christians to back the international interest in one of Untermeyer’s pet projects—the Zionist Movement.”

Others have been even more explicit about the nature of Scofield’s service to the Zionist agenda. In “Unjust War Theory: Christian Zionism and the Road to Jerusalem,” Prof. David W. Lutz writes, “Untermeyer used Scofield, a Kansas City lawyer with no formal training in theology, to inject Zionist ideas into American Protestantism. Untermeyer and other wealthy and influential Zionists whom he introduced to Scofield promoted and funded the latter’s career, including travel in Europe.”

On one of these European trips, Oxford University Press publisher Henry Frowde “expressed immediate interest” in Scofield’s project. According to a biography of Frowde, although the OUP publisher was “[n]ot demonstrative in his religious views, all his Christian life he was associated with brethren known as ‘Exclusive.’” The “Exclusive Brethren” refers to the group of Christian evangelicals that, in an 1848 split in the Plymouth Brethren, followed John Nelson Darby, the Anglo-Irish missionary generally considered to have been the most influential figure in the development of Christian Zionism, and a major influence on Scofield.

Had the Scofield Bible never been published, American presidents influenced by Christian Zionism such as Truman, Johnson, Reagan, and George W. Bush might have been less sympathetic to Israeli demands, and consequently more attentive to U.S. interests. Moreover, the American people could have been spared the pseudo-Christian rants of John Hagee, Pat Robertson, and the late Jerry Falwell, not to mention the lucrative End Times Rapture “prophecy” peddled by Hal Lindsey and Tim LaHaye.

But it is the people of the Middle East who have been most affected by an expansionist Israel emboldened by the unswerving allegiance of Christian Zionists led to believe that Scofield’s words are God’s will. Not least among the many victims of the Scofield Bible are 5 million Palestinian refugees whose right to return is fervently opposed by America’s Zionized Christians. Thanks to their indoctrination by Scofield’s unholy book, they believe that Palestine belongs not to the Palestinians—many of whom are fellow Christians—but exclusively to “God’s chosen people.”

*[Editor’s note: Regarding Hagee’s Christians United for Israel, it is important to be aware that CUFI’s founding executive director, who led the organization for most of its life, was David Brog; in 2007, the Forward listed Brog in its “Forward 50” most influential Jews in America. Former Israeli Prime Minister Ehud Barak is Brog’s cousin.” Brog remains on CUFI’s executive board. The new co-executive director is Shari Dollinger, who had been associate director since 2007. Dollinger is a Jewish advocate for Israel who had previously been employed by the Israeli embassy and by AIPAC. It appears that she may be an Israeli citizen. A co-founder of CUFI was Rabbi Aryeh Scheinberg.]

Maidhc Ó Cathail wrote extensively on U.S. foreign policy and the Middle East. He was also the creator and editor of The Passionate Attachment blog, which focused primarily on the U.S.-Israeli relationship.