You Are Here: Home → Democratic primaries will reveal party’s debate on Israel 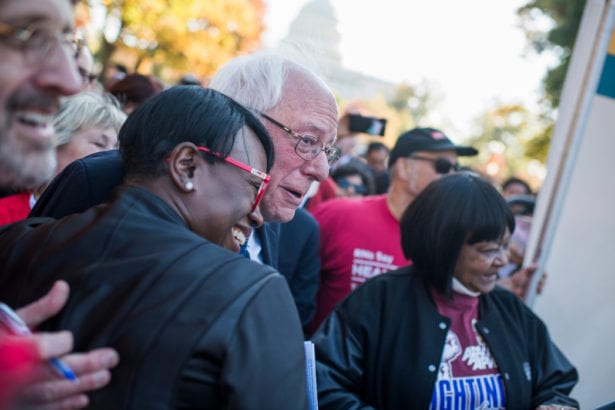 Former Ohio state Sen. Nina Turner, left, with Vermont Sen. Bernie Sanders in 2016, is running in a special election that could offer clues into the depth of support for Palestinian rights within the Democratic Party. (Roll Call/Tom Williams)

ANALYSIS — The split in the Democratic Party over Israel burst into the open after its bloody conflict with Hamas in the Gaza Strip in May. [See this] For now, the party’s pro-Israel wing remains dominant, but primaries this election cycle will reveal if the divide is growing or narrowing.

The intraparty disagreement grew heated when high-profile progressives, such as New York Rep. Alexandria Ocasio-Cortez, harshly criticized Israel for the airstrikes it launched in response to rocket attacks by Hamas, the militant group in charge in Gaza. Ocasio-Cortez called Israel an “apartheid state” for its treatment of the Palestinians who live in Gaza, but President Joe Biden and congressional leadership stood by Israel.

Pro-Israel groups have succeeded in the past in defeating Democrats who challenge the party’s support for Israel, such as former Reps. Earl F. Hilliard of Alabama and Cynthia A. McKinney of Georgia, both of whom lost 2002 primaries.

They will try again. A special election for Ohio’s 11th District offers an early test for the 2022 midterms, as Democrats battle for the nomination for the deep-blue seat that Marcia L. Fudge vacated to become secretary of Housing and Urban Development. A leading candidate is former state Sen. Nina Turner, who, like Ocasio-Cortez, has the backing of the progressive group Justice Democrats and has said she favors putting conditions on U.S. aid to Israel.

Some pro-Israel organizations have thrown their support to Cuyahoga County Council Member Shontel Brown, who, like Turner, is a liberal Black woman, albeit one more critical of Hamas’ rocket attacks. Democratic Majority for Israel, which operates a nonprofit advocacy group, a PAC, and a super PAC, has endorsed Brown in the August primary. So has another outside organization, Pro-Israel America.

“The overwhelming majority of Democrats in Congress are pro-Israel,” said Mark Mellman, president of Democratic Majority for Israel. He also noted the Biden administration’s support for Israel.

Trend is support for Palestinian rights

But he agreed, as many on both sides of the aisle have done recently, that left-leaning Democrats on Capitol Hill have shifted the dialogue.

“We think that group is fairly small, and we want to keep it that way,” Mellman said.

The trend is against him. While it may be a slim fraction of congressional Democrats that criticizes Israel, the group grew following the 2020 elections, mainly as a result of Democratic primaries.

Reps. Cori Bush of Missouri and Marie Newman of Illinois are both progressives who defeated incumbents more aligned with Israel. New York Rep. Eliot L. Engel, a staunch supporter of Israel as chairman of the Foreign Affairs Committee, lost a primary last year to Jamaal Bowman, who had the endorsement of Ocasio-Cortez and Justice Democrats.

“In concrete terms, support for Israel remains perhaps the issue of the most bipartisan agreement in Washington today,” said Marshall Wittmann, a spokesman for the American Israel Public Affairs Committee. “Democrats and Republicans in Congress have demonstrated that solidarity with Israel through nearly 400 statements of support during the conflict, and a recent letter signed by three-quarters of the House endorsed full funding for Israel’s security assistance without additional conditions.”

Despite that, advocates for Palestinian rights say they’re seeing a measurable move in their direction. The Council on American-Islamic Relations is planning a Hill Day on June 21 to “Keep Up the Momentum on Palestinian Human Rights,” according to an email from the group.

Robert McCaw, CAIR’s government affairs director, said he detects “a major shift in congressional attention to the plight of the Palestinians” this year. He also pointed to a Palestinian human rights bill from Minnesota Democratic Rep. Betty McCollum. Though the measure is unlikely to move in Congress, it has drawn the support of 23 Democratic co-sponsors, including Ocasio-Cortez.

A recent Quinnipiac poll showed that Americans’ sympathies are split, with 39 percent favoring Israel, 29 percent with the Palestinians, and 32 percent not offering an opinion.

J Street, a liberal Jewish political organization that advocates a two-state solution for the Israeli-Palestinian conflict and endorsed Newman in her primary against former Rep. Daniel Lipinski, believes it has offered Democrats the room to be considered pro-Israel while also criticizing the Israeli government on the way Palestinians are treated. Logan Bayroff, the group’s vice president for communications, said it’s “politically safe” for Democrats to separate support for Jews from support for the actions of the Israeli government. “What we’ve seen again and again is that the supposed political risk just does not exist,” Bayroff said.

But within the Democratic races, there’s little sign the debate will fade this cycle.

“And there’ll be more,” Mendelsohn says. “We’re just getting started.”

Kate Ackley covers lobbying, influence and political money for CQ. She is an expert on K Street and the relationship between Congress and those seeking to influence it.