You Are Here: Home → Israeli checkpoint killing of Palestinian Ahmad Erekat was an execution, report claims 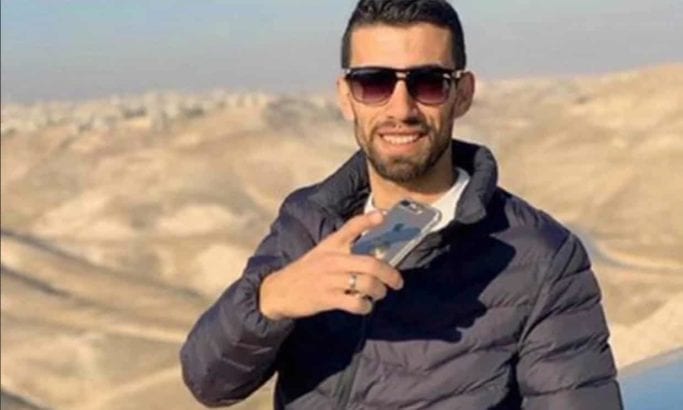 Ahmad Erekat was shot seconds after his car crashed into a booth and lightly wounded an Israeli border guard.

London-based group says video evidence casts doubt on claims Ahmad Erekat was conducting an attack on the day of his sister’s wedding last June, when Israeli police gunned him down. It’s what his family has said all along. See two reports below:

[Note: the United Nations Office for the Coordination of Humanitarian Affairs – OCHA – reported in 2018 that Israel had placed over 700 road obstacles within the Palestinian West Bank alone to restrict and/or control Palestinian movement. At that time, 140 of them were fully- or occasionally-staffed checkpoints.

Perhaps the most notorious is Checkpoint 300, where Palestinians must line up as early as 3 am in order to get through in time for work.

Palestinians find checkpoints not just inconvenient, but demeaning and infuriating. Read more about checkpoints and the killing of Ahmad Erekat here.]

Israeli forces executed a 26-year-old Palestinian at a checkpoint in the occupied West Bank last year, a report has alleged, challenging Israeli police claims that the man was a “terrorist” conducting an attack.

Forensic Architecture, a British research body based at Goldsmiths, University of London, said it had conducted an analysis into the death of Ahmad Erekat, who was shot seconds after his car crashed into a booth and lightly wounded an Israeli border guard.

The incident last June was described on the day by Israeli police as a “vehicle attack”, saying that its forces had “quickly neutralize [sic] the threat from the terrorist”.

In the past few years, Palestinian attackers have used car-rammings against Israeli security forces and civilians.

However, Forensic Architecture said its investigation, which reconstructed the scene using available film, including security footage published by police, cast “significant doubt” on claims Erekat was involved in an attack, and suggested the crash may have been an accident.

A collision expert cited in the report, Jeremy J Bauer, found the car was not accelerating significantly and hit the woman at low speed. “Our analysis also comes across evidence that raises the possibility that Erekat braked before impact with the checkpoint,” the report said.

Israeli forces had not produced “any evidence that it was not the result of an error or malfunction”, it added.

According to Erekat’s family, he was running chores for his sister’s wedding, which was due to take place later that day.

Israeli police claimed Erekat “approached officers” after the crash. Forensic Architecture said video proved he had “raised his hands in the air, moved away from the soldiers, and did not pose any immediate threat”.

He was shot up to six times within seconds, it said, adding that Israeli forces offered no immediate medical aid, even while he was clearly alive. The killing amounted to an extrajudicial execution, it concluded.

Erekat’s body was stripped and left for more than an hour and a half on the ground, it said.

Forensic Architecture is headed by Eyal Weizman, a British-Israeli professor at Goldsmiths. It has conducted several open-source investigations that use 3D modelling, including into the Beirut port explosion and US police brutality.

This is the first investigation by the body’s Palestine Unit and was supported with documentation by the Palestinian human rights organisation Al-Haq.

Responding to the report, Israeli police claimed Erekat had moved “quickly towards the border police officers” while “waving his hands in a manner deemed threatening”.

Police and military investigators had concluded that “Erekat carried out a deliberate ramming attack”. Without providing evidence, police said information on Erekat’s phone “reinforced” that conclusion.

It added Erekat had no pulse minutes after the incident and was pronounced dead. “During the entire incident, there was no degrading treatment.”

It said it would not be able to comment on holding the body, as it was part of legal proceedings in the high court.

B’Tselem, an Israeli rights group, says the country is holding dozens of bodies of Palestinian attackers and alleged attackers to use “as bargaining chips for future negotiations”. Hamas, a Palestinian militant group, is believed to hold the bodies of two Israeli soldiers.

TEL AVIV, Israel (AP) — An international research group examining the fatal shooting of a Palestinian motorist challenged Israeli self-defense claims, saying the man had emerged from his car after it crashed into a checkpoint, did not approach troops and was instantly shot six times. It says the last three rounds were fired while he lay curled up on the ground.

Israel has said 27-year-old Ahmad Erekat intentionally rammed his car into a guard booth at a military checkpoint in the occupied West Bank, and that troops killed him in self defense.

The London-based group Forensic Architecture, working with the Palestinian human rights group Al Haq, reviewed the June 23 shooting at the request of the Erekat family and released its findings this week. “Our analysis raises major questions about Ahmad’s killing that raise doubts in the Israeli army’s claims and calls for further investigation,” the group said in a statement.

In recent years, Palestinian assailants have carried out a series of shootings, stabbings and car ramming attacks against Israeli soldiers and civilians. Human rights groups have accused Israeli troops of repeatedly using excessive force and in some cases opening fire at cars that merely lost control.

An outside investigation of such a shooting is rare. Ahmad Erekat was a nephew of the late Palestinian negotiator Saeb Erekat.

Forensic Architecture, which investigates human rights violations, used security camera footage, 3D analysis and other techniques to review the June 23 events from the time of Erekat’s shooting to when his body was removed from the scene.

The video shows Erekat’s car slowly approaching the checkpoint, veering left and then abruptly pivoting to the right, colliding with the booth.

After the car hits the booth, a female officer can be seen flying through the air and quickly stands up. Erekat steps out of the car with at least one hand raised, taking no steps toward the checkpoint and Israeli officials. He is immediately shot and falls to the ground.

Shortly after, his arm can be seen moving, suggesting he might have still been alive. Later, an officer can be seen passing closely by the still figure without pausing to check on it.

The group said its evidence shows that the Israeli forces did not give Erekat medical treatment and even turned away a Palestinian ambulance. Erekat likely died during that time, the analysis says.

Investigators later can be seen flipping Erekat’s body over from the exact position in which he fell. At one point, the analysis claims his body was stripped before it was removed from the scene, but that footage is blurred, the group said, out of respect for Erekat’s family.

The Israeli police did not return a call seeking comment Friday.

In a response carried by the Israeli daily Haaretz, Israeli authorities insisted troops acted in self-defense. Police described the incident as “a documented terrorist attack that almost took the lives of the fighters at the checkpoint.”

Forensic Architecture said in its report that Erekat’s car hit the guard booth at a steady slow speed, rather than accelerate. Israeli police disputed that finding, saying the car suddenly accelerated. It said a female police officer was injured in the incident.

Police said Erekat’s body was kept at the scene for an examination by a bomb disposal expert, and that “when he was done, the medical forces were able to work.”

In its initial response in June, police had claimed that Erekat moved toward the officers after getting out of the car – a claim not backed up by the video.

Erekat’s family cast doubt on the police account, saying he had rented the car as he prepared for his sister’s wedding party later that day, and that his own wedding was scheduled the following week.

“There is no way on earth he would attempt to carry out an attack,” his cousin, Hiba Erekat, said at the time.