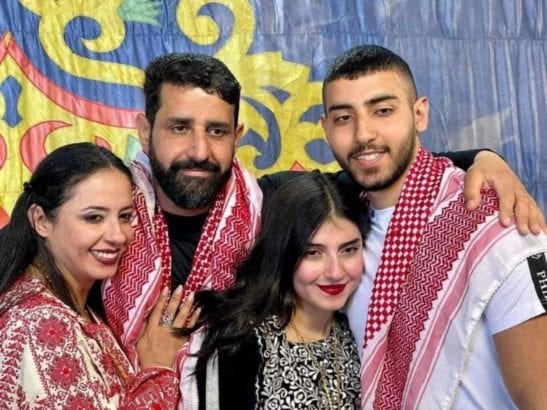 Magd Barbar, a Palestinian prisoner from the occupied East Jerusalem, reunited with his wife Fatmeh, and his son and daughter after 20 years in Israeli jails

Two hundred words that span 20 years of Magd Barbar’s life – and it gets more disturbing with every sentence.

The scenes of jubilation following the Tuesday release of Magd Barbar, a Palestinian man who spent 20 years in jail, were brought to an abrupt and violent halt that night when he was rearrested by Israeli forces.

The 45-year-old was first arrested in 2001 at the peak of the Second Intifada, and was charged with belonging to the Popular Front for Liberation of Palestine (PFLP), Marxist-Leninist group, and plotting military acts against Israeli targets. When he was arrested, Barbar was forced to leave behind a 15-day-old daughter and two-year-old son.

Israeli forces raided Barbar’s home on Tuesday evening while hosting guests and relatives who came to visit him. Palestine’s Red Crescent reported that 12 people were wounded by rubber-coated bullets, tear-gas suffocation and beatings.

Israeli forces also raided Qasr al-Hamra hall in the East Jerusalem suburb of Eizariya where Magd Barbar planned to host a lunch for friends and relatives the next day, as people eagerly sought to receive him after two decades in prison.

Izz, Barbar’s brother, told media that Israeli forces asked the family to get rid of all welcoming signs in the house on Tuesday, before returning in numbers to raid the home and rearrest him.