You Are Here: Home → German cartoonist sacked after Netanyahu drawing 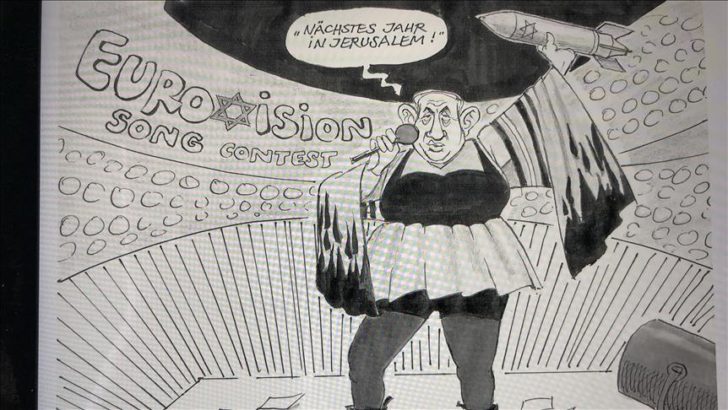 85-year-old cartoonist Dieter Hanitzsch was fired Friday for an allegedly anti-Semitic drawing of Benjamin Netanyahu, demonstrating that Germany is assimilating the Israel-centric definition of anti-Semitism – which includes suppression of any criticism of Israel. The cartoonist refused to apologize.

A leading German daily fired a cartoonist over anti-semitic [sic] views on Friday after he drew a caricature of Israeli Prime Minister Benjamin Netanyahu.

The cartoon by Dieter Hanitzsch showed Netanyahu carrying a missile in his hand. He is dressed up as Israeli singer Netta Barzilai, who won this year’s Eurovision contest. A speech bubble on top says: “Next year in Jerusalem.”

The cartoon led to an uproar on social media and other German media outlets.

Speaking to local media outlets, the 85-year-old cartoonist said he wanted to criticize Netanyahu’s exploitation of the Eurovision contest for his own purposes and accused him of abusing the singer’s victory.

He added that it was not a common thing for a newspaper to fire its cartoonist over a drawing.

“You can reprimand him, warn him, but firing is not a good way,” he said.

Previously, Hanitzsch had drawn cartoons criticizing and even insulting Turkish President Recep Tayyip Erdogan. He was defended on the basis of freedom of the press and expression, for his drawings published in the same newspaper.