You Are Here: Home → Kairos Statement on Gaza and Jerusalem

Kairos Statement on Gaza and Jerusalem 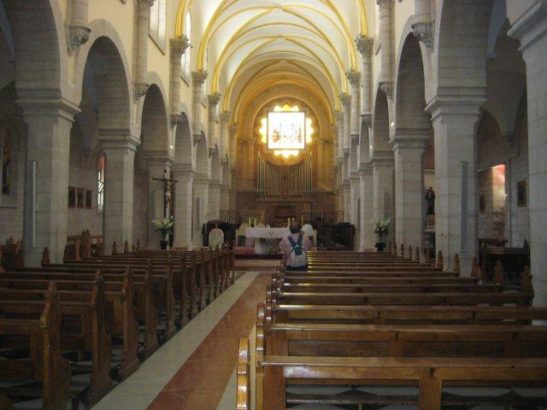 Kairos Palestine is a Christian Palestinian movement which advocates for ending the Israeli occupation and achieving a just solution to the conflict.

Kairos Palestine, a Christian Palestinian movement, calls on Christians around the world “to be the conscience of humanity and hear the cry of the oppressed in the Holy Land,” to call for the end of oppression, occupation, and violence.

” If thou seest the oppression of the poor, and violent perverting of judgment and justice in a province, marvel not at the matter: for he that is higher than the highest regardeth; and there be higher than they” (Ecclesiastes 5:8)..

On Monday, May 14th 2018, in Gaza, 60 people were killed and 2771 wounded among crowds walking unarmed towards their villages, from which they had been compelled to leave. They were killed in cold blood and posed no threat to anybody.

Thus, the situation in which we are living is not one of rejoicing and the inauguration of a new embassy. We live in an inhumane situation that must be changed.

The siege on Gaza, on two million people living on land of merely 380 km², must be lifted. The West Bank must be liberated and the people in it regain their freedom and complete equality must be ensured for all inhabitants of the land.

This is the 70th year of the catastrophe that befell the Palestinian people, and that started to deform the face of the Holy Land into a land of war and death. Our catastrophe remains ongoing.

It is an anniversary of death and not a celebration, including for Israel that still fears and rejects the application of United Nations resolutions. Israel is still afraid of peace and the peaceful march of unarmed Palestinians in Gaza and in the Occupied Territories. Israel which still feels obliged to give orders to its soldiers to kill unarmed people who claim their freedom.

We call upon the international community to remember its own resolutions and to abide by them. We call upon churches to be the conscience of humanity and hear the cry of the oppressed in the Holy Land.

We call upon them to condemn the Christian Zionists whom we saw in these days, contradicting the Gospel of love and peace, by supporting oppression and injustice, under the pretext of prophecies, and standing with the powerful of this world in their injustices.

We urge the international community to shoulder its responsibilities. We call upon it to exert every pressure, even sanctions if necessary, to force Israel to follow the path of peace and justice, to lift the oppression from the people of Gaza and all the Palestinian people, to prevent death in the Holy Land, abandon its apartheid practices, and comply with international law.

We call on churches in our Holy Land and throughout the world to be courageous and faithful to their mission, to assume their responsibilities towards the Holy Land and all those who live in it, to bring through their prayers awareness of what is going on in the Holy Land, and to take effective steps towards justice, equality and peace in this land where the roots of their faith lie.

We call on our people to remain steadfast in the face of all plots and intrigues.

This is our call; this is the cry of the Christian conscience in the Holy Land, the cry of all Christians, leaders and people, on this anniversary, the anniversary of the year when the killing of each other began in the land made holy by God, not to kill but to let all people love each other.

Israel isn’t as Christian-Friendly as you think