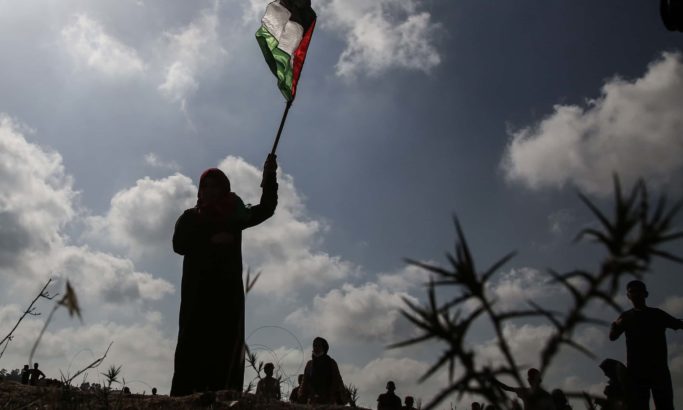 A woman waves a Palestinian flag during a protest at al-Bureij refugee camp, where Wesal lived, near the Gaza-Israel border. Photograph: Anadolu Agency/Getty Images

Profound poverty and injustice drove 14-year-old Wesal to depression and a longing to be “with God.” She felt compelled to attend the border protests in Gaza every Friday. After Israeli snipers killed her, Wesal’s family understands her passion to resist the crushing occupation and blockade; she has inspired them to join the resistance.

By Oliver Holmes and Hazem Balousha, the Guardian

The family of Wesal Sheikh Khalil say that in a matter of weeks the teenager experienced a complete transformation, from a hop-scotching child to an adolescent infuriated by injustice in Gaza.

“You are cowards,” she screamed at her aunts when they refused to join protests at the border, where health officials say Israeli forces have killed more than 110 and shot thousands since demonstrations began in late March.

Her immediate family, impoverished even by the coastal enclave’s dire standards, had been unengaged in politics. Wesal and her 11-year-old brother were the only ones who trekked weekly to the perimeter, into the surging crowds and the black smoke of burning tyres. Their siblings tried to stop them, but they would sneak out.

Wesal, 14, was shot dead on Monday, one of more than 60 people killed as Israeli snipers fired on protesters. The teenager has left behind a family who are grieving, but who also feel purpose in their loss.

“Now she is dead, I’m ready,” said another aunt, Anwar. “After what she did, we are not afraid.”

Wesal’s brother said she had been carrying wire cutters to break through the fence on Monday, and others say she ferried water bottles and stones to people at the front, metres from Israeli snipers.

Unlike Wesal, most of those killed were men, and Gaza’s de facto ruler, Hamas, says 50 of Monday’s dead were its members. The group, whose military wing is on a UK terrorism list, says its men joined other Palestinians to protest unarmed, although Israel accused them of several attacks on the fence involving explosives.

But children in Gaza being shot is not unusual. The United Nations Children’s Fund, Unicef, says more than 1,000 have been wounded since protests began, some resulting in amputations. Save the Children says its own study found 250 children have been shot with live ammunition.

During Wesal’s life in the al-Bureij refugee camp, her family spent their time focusing on the mundane struggle to get by. Her mother and six siblings lived together in single rooms, moving every few months when they were evicted for lapsed rent payments.

Reem Abu Irmana said her husband, from whom she is now divorced, had a mental illness and would mix cannabis with pain medication such as tramadol. She worked as a house cleaner, earning 50 shekels (£10) a day, but he would confiscate most of it.

Wesal focused on her passions – playing outside in the streets and learning to read the Qur’an using an audio version downloaded on her mother’s phone. Reading was difficult, but she loved mathematics and, inspired by her favourite teacher, wanted to teach the subject in the future.

Drawing was another hobby, and her mother keeps a picture of a sketch her daughter made for her three weeks ago in a school notebook. It shows hearts, and a dedication in Arabic: “The love of my soul”.

Recently, however, she started to stay indoors, said Abu Irmana. “Wesal lived a tough life: the absence of her father, all of us sleeping in one room.”

She would flip-flop from joy and warmth to rages and fatalism. Wesal started to crave death. She told her mother that if she died, there would be more room for her siblings and they would not have to live cramped “like fish in a net”.

“She had nothing. Not like her friends. She was jealous. She was deeply depressed,” said Abu Irmana. “Sometimes dancing, sometimes furious. Once, she said she wanted to rip someone apart.” When her mother tried to comfort Wesal, she replied she would only rest when she was “with God”.

Gaza’s economy has collapsed under a decade of Israeli and Egyptian blockades. Internal divisions between Hamas and the West Bank-based Palestinian Authority mean salaries and electricity supply have at times been cut from the coastal enclave.

Unemployment hovers around 40% and debt is rampant. Border crossings trickle with people when they are open. Many have never left the strip, a piece of land similar in size to a large city.

Israel says it is forced to limit access to the territory for security reasons, although the UN regards the blockade as collective punishment. The rallies have called for an end to the blockade and for residents to be allowed back to their ancestral homes in what is now Israel.

In al-Bureij, Wesal’s mourning family was squeezed into a small kitchen, using phones and solar-powered torches to light the room.

Anwar remembers worrying that her own daughters, who are of a similar age to Wesal, would follow her to the frontier. “I argued with her about it,” said Wesal’s aunt. But she, too, joined her niece one Friday.

“I arrived, and I saw the soldiers on the other side,” she said. Anwar said she had a flashback to when Israeli troops entered her home in a raid 15 years ago. Her brother, a fighter with the militant faction Islamic Jihad, died in a shootout that night, she said.

The emotions resurfaced, and she recalls Wesal asking her: ‘What’s your opinion now?’”