You Are Here: Home → Balloons: A rudimentary weapon of Palestinian desperation 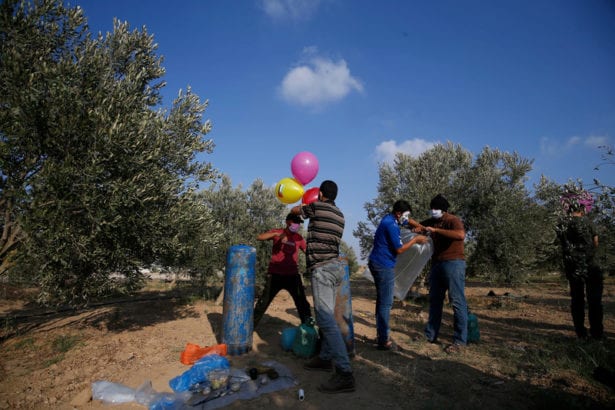 The use of incendiary balloons and kites from Gaza are used as a response to Israel’s use of massive and deadly force against unarmed protesters.

By Hamza Abu Eltarabesh, reposted from The Electronic Intifada

It was a quiet night in early August.

At a signal, five men emerged silently from the cover of some trees to an agreed meeting point.

I was there, all dry mouth and notebook, observing. I’d been specially invited. Above us, only the sound of Israeli drones could be heard, patrolling the skies, electronic eyes on the ground, watching for prey.

Focused and silent the men worked for an hour under the instructions of Abu Karam, the leader of this small group who is identified only by his nom de guerre. Filling condoms with helium gas, they took until just after five in the morning before they were ready.

Soon, wind permitting, the men would release a flurry of balloons carrying burning rags. The idea? To send them over the boundary from Gaza and – variables allowing – perhaps set a fire or at least cause disruption.

What was I doing here?

I was curious. Since shortly after the Great March of Return Protests started in 2018, incendiary devices have been one of the methods used by resistance groups and individuals in Gaza to try to hurt or inconvenience Israel, however little.

The thinking is simple. Israel has shut two million people up in Gaza for nearly a decade and a half and locked the area down (before any pandemics), destroying the economy and any hope of a better life in what has become a large open-air prison.

There has been hardly any international pressure on Israel, the occupying power, to end this medieval siege despite repeated warnings from human rights organizations and international bodies like the United Nations of its impact on the area’s health, development, and future.

Militarily at an enormous disadvantage, people – unaffiliated individuals or members of the main resistance groups operating in Gaza, Hamas, and Islamic Jihad – have thus turned to other means to show their anger, to inflict some damage back or simply to call attention to their plight.

The Great March of Return protests were one way to respond. These unarmed protests were met, predictably, with live fire and great violence from our Israeli prison guards.

Kites and balloons carrying burning rags are another means to respond.

Indeed, the use of incendiary balloons and kites from Gaza started during the Great March of Return protests and as a response to Israel’s use of massive and deadly force against unarmed protesters.

The protests stopped a year ago. Fatigue, injury, and politics led to the demonstrations scaling down, while the COVID-19 pandemic killed off plans to hold them on notable occasions, like the commemoration of the Nakba in May.

The pandemic, however, also gave a new focus for anger. Effectively cut off from the world, Gaza avoided the worst of the pandemic in its first phase, able, as health officials were, to easily identify the very few travelers from abroad and quarantine them immediately.

But in August that changed when Gaza suffered its first cases of community transmission.

Since then, COVID-19 has been raging out of control, with the dangerously unequipped medical sector in Gaza unable to cope as a result of Israeli sanctions that have left even essential medicines at a premium in Gaza.

And while there have been constant warnings from the UN, the World Health Organization, and human rights groups about the situation in Gaza, there has been no serious attempt to pressure Israel to ease the blockade on Gaza and ameliorate the situation.

In November, groups engaged in the incendiary campaign announced that they had waited long enough for Israel’s goodwill or the help of international actors.

Citing, in particular, a tightening of the blockade on “medical supplies related to the corona pandemic,” a volley of balloons was launched at Israel.

Every such action is a deadly undertaking. Israel routinely launches missiles and attacks with jets in response to what its always-eager media have dubbed “balloon terrorism.”

The November volley followed the one in August I witnessed.

That one too came amid despair over Israel’s siege on Gaza.

I had long been curious about the men – they are always men – who put their lives at risk in order to launch these balloons.

So I had actively sought to accompany these men – tapping friends of friends of friends to hear if they would take along a journalist – even though it would be some of the most dangerous work I’d undertaken since the 2014 Israeli aggression against Gaza.

Incendiary balloons have a surprisingly long military history. In Europe, the Danes tried to use them to break a British naval blockade in the early 19th century.

In neither case were they of much use, nor have they been much utilized at other times or in other places.

Their efficacy as a weapon is clearly hugely limited. They are “rudimentary,” according to writer and activist Ahmed Abu Artema, one of the organizers of the Great March of Return.

Nevertheless, he told The Electronic Intifada, “It’s clear that Israel reacts to launching incendiary balloons as if they’re a real military weapon.”

Thus informed, and with the blessing of group leader Abu Karam, I joined up with the young men that early morning in August.

It was three days after the first COVID-19 community transmissions were diagnosed in Gaza. That made the men’s task even harder. Not only would the group have to evade Israel’s drones, but a curfew had been imposed by the local authorities and police were everywhere.

For me, it meant what was normally a 10-minute drive to the border area, five kilometers away from my home in the Jabaliya refugee camp, turned into an 80-minute walk.

Before preparations started, all our phones were turned off and placed somewhere far away from where the group would work. Instead, the men used hand signals to communicate.

“The more caution you exercise in hiding from the drones, the more chance you have of getting home safely,” Abu Karam explained.

At that time of day, it is very quiet, frighteningly quiet when engaged in this kind of activity. All I could hear, as the men worked on their balloons, was the sound of drones hovering above and the wind rustling through leaves.

Abu Karam, 41, is a calm man whose anger is felt only in his words and whose sorrow occasionally shows in his eyes.

While the other men were preparing the balloons, he took time to talk to me about what he was doing and why.

That day saw more than 60 Palestinians killed in protests along the boundary with Israel. It was too much for Abu Karam, who had not missed a single protest, and who had lost six friends himself during the protests generally, and, decisively, one during the 14 May mayhem.

It convinced him that no one was coming to help, no matter what Israel did.

“The world remained silent, just watching us die,” Abu Karam told me. So he began discussing options with friends and other demonstrators.

“We needed to figure out a way to respond to the Israeli crimes.” Some individuals had already begun using incendiary kites, but it had been more symbolic than an organized effort, he said.

The kites, Abu Karam said, “represent the fire that burns in our hearts with every victim Israel kills or injures.”

But the idea was impractical. Kites, a favorite toy for children in Gaza, fly well but are easily detected on launch.

And on 14 May, one of Abu Karam’s friends was shot and killed as he was about to launch a kite.

Thoughts turned to balloons and organization.

“When Majd was killed, we started to feel that firing kites was too dangerous. That’s when we turned to balloons,” Abu Karam said.

But Abu Karam also felt his friend’s killing spoke to more than merely opportunistic sniper fire. And his extreme caution is a result of the lessons he says he has learned from his friend’s slaying.

“Israel monitors our phones,” Abu Karam told me. “They knew Majd was going out to launch kites. He was assassinated.”

Launching balloons sounds easy, but it needs a certain amount of knowledge and experience. A successful launch depends on two variables: wind direction and speed, and the type and length of wick.

The wind has to be favorable and not be too wild. And a wick is crucial to light and keep a rag burning long enough to land aflame in a targeted area.

Other than that, Abu Karam said, the balloons were a cheap and easy weapon. He estimated the cost of a launch like that day’s, including condoms, helium, rags, and wicks, at no more than $1 per balloon.

“Who would have thought,” said Abu Karam with a laugh, “that our secret weapon would be a condom.”

Throughout our talk, Abu Karam had kept an eye on the weather. After about an hour, he cut the conversation short.

With an eye on the sky above us for drones, he gave a signal to the other men to ready for launch. While we had been talking, the young men had prepared some 20 balloons.

Before launch, however, they asked me to leave. To stay, they said, was simply too dangerous.

I left the men behind, but the lonely walk back was almost as terrifying as the walk there had been.

That day’s volley of balloons went off quietly enough. I heard no bombing behind me. There were no reports of any of the young men being wounded or killed.

In fact, in December, I met Abu Karam by coincidence again.

With COVID-19 restrictions at a peak and Gaza’s health care system at breaking point, he remained adamant that he was ready at any time should the world again fail to pressure Israel to allow in needed medical equipment to combat the pandemic.

“We have thousands of balloons ready to launch.”

I asked him again why he, a father of several children, the oldest just a teenager, was ready to risk his life this way.

“I fire balloons because I can. I have experience. I can serve my people in Gaza.”

“I also do this to avenge my martyred friends.”

Hamza Abu Eltarabesh is a journalist based in Gaza.