You Are Here: Home → Another little girl dies from Israeli strikes on Gaza

Another little girl dies from Israeli strikes on Gaza 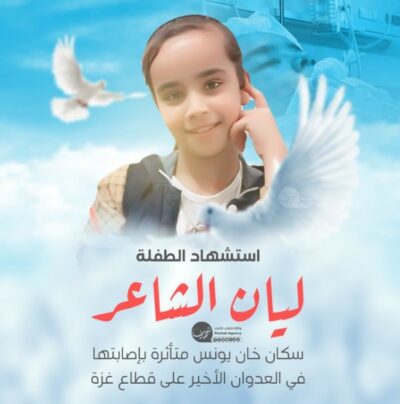 Layan Musleh Sha’er, 10, died from a wound to the brain caused by Israel’s recent bombardment of Gaza

On Thursday, the Palestinian Health Ministry said a child died from serious wounds she suffered during Israel’s recent onslaught on the Gaza Strip.

The al-Makassed Hospital in occupied Jerusalem, in the West Bank, said the child, Layan Musleh Sha’er, 10, was admitted after being transferred from Gaza, suffering a shrapnel wound to the head, causing significant damage to her brain.

The child, from Khan Younis in the southern part of the Gaza strip, was clinically dead upon arrival and remained hooked to a respiratory machine after the surgeons tried to save her life until she succumbed to her serious wounds.

She was a school student and a member of a Palestinian folklore dance team (Dabke); the last time the slain child and her Dabke team performed was last month at the Nuwwar Education Center in Gaza. On Tuesday, The Palestinian Health Ministry in Gaza said Ibrahim Shehda Abu Salah, 41, died from serious wounds he suffered last Saturday, during the Israeli bombardment of Beit Hanoun, in the northern part of the Gaza Strip.