You Are Here: Home → A sensationalist, award-winning ‘NY Times’ podcast on Islamic Jihadism was based on a fraud

A sensationalist, award-winning ‘NY Times’ podcast on Islamic Jihadism was based on a fraud 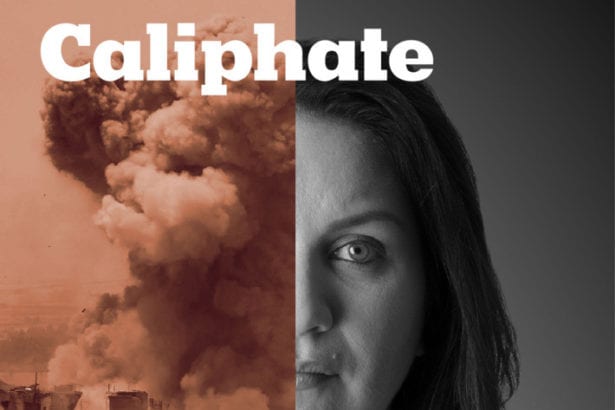 A 10-part series by the New York Times’ Rukmini Callimachi was based on ‘revelations’ by a man who was recently arrested in Canada and charged with fraud. Callimachi has connections to Israel lobby organizations…

By James North, reposted from Mondoweiss (video and photos added)

An award-winning breathless New York Times podcast about Islamic Jihadism that was downloaded millions of times in 2018 turns out to have been based on a fraudulent liar — but so far the paper and its reporter, Rukmini Callimachi, have declined to fully acknowledge their error.

The podcast, “Caliphate,” won the prestigious Peabody award in 2018, even though genuine experts had already raised serious doubts about Callimachi’s reporting. But a closer look at the developing scandal suggests that the reporter herself is only partly to blame; she is working in a mainstream journalistic world that encourages and rewards biased looks at Islam and Jihadism.

“Caliphate” was based around the “revelations” of “Abu Huzayfah,” a young Canadian who said he had joined ISIS in Syria where he personally murdered prisoners. Skeptics raised doubts immediately — but it took until last week for Canadian authorities to arrest 25-year-old Shehroze Chaudhry, charging that he made up his story.

The Times and Callimachi have defended themselves so far by contending that midway through their 10-part podcast they did concede that Abu Huzayfa’s story may not have been entirely accurate. But they have stopped far short of a full-fledged retraction.

The blood — it was warm, and it sprayed everywhere. And the guy cried — was crying and screaming. It’s hard. I had to stab him multiple times. And then we put him up on a cross. And I had to leave the dagger in his heart.

The dishonesty of “Caliphate” comes as no surprise to knowledgeable critics. In a remarkable report in The Baffler back in 2018, the Pakistani writer Rafia Zakaria warned that “Abu Huzaifa’s” story did not ring true. Zakaria went on:

For Callimachi, the hunched and hooded Abu Huzaifa appears forbidding and lethal precisely because he doesn’t appear to be either of those things. It’s his ‘everyday-ness,’ she tells us again and again; any brown man could be a terrorist, is the implication.

Rukmini Callimachi has also come under fire for seizing 15,000 pages of ISIS documents after Iraqi forces recaptured Mosel in 2016, and writing articles based on them. A long, persuasive exposé by Maryam Saleh in The Intercept noted that scholars and others had objected to Callimachi’s grabbing the documents and also asked if she had not put Iraqis at risk by reporting their names.

There is more. In February 2017, Callimachi published a long, characteristically breathless report headlined: “Not ‘Lone Wolves’ After All: How ISIS Guides World’s Terror Plots From Afar.”

A genuine expert, Professor Alex Thurston, challenged her immediately. He sent a detailed critique to the New York Times’s Public Editor (the paper still had one), which started out by asking why she relied on 3 separate “terrorism analysts” who were all connected with Valens Global, a right-wing Washington, D.C. organization.

[Editor’s note: One of Callimachi’s sources, Valens Global CEO Daveed Gartenstein-Ross, had been vice president at the Foundation for Defense of Democracies (FDD), a think tank closely associated with Israel. Before that he worked with Steven Emerson, another Israel partisan who claims to be a ‘terrorist expert.’]

Thurston pointed out that Valens “clearly has a business incentive to depict the threat of global jihadism as severe.” He closed by noting:

I am concerned that right-wing perspectives on terrorism are unduly shaping the New York Times’s coverage.

The unmasking of “Abu Huzayfah” has prompted an avalanche of online criticism of Callimachi. But the failure is actually not hers alone. She works in a mainstream media world that is still disfigured by Orientalist sensationalism and honors such work.

Despite the numerous doubts about some of her dispatches, her bio on the Times website boasts that she is “a four-time Pulitzer Prize finalist. . . She is also the winner of the George Polk Award for International Reporting, multiple Overseas Press Club Awards. . .” Basking in that kind of approval, why would Rukmini Callimachi pay any attention to the doubters?

Off The Charts: Report On New York Times Israel/Palestine Coverage