You Are Here: Home → Judith Miller forgets how many deaths her erroneous reporting caused 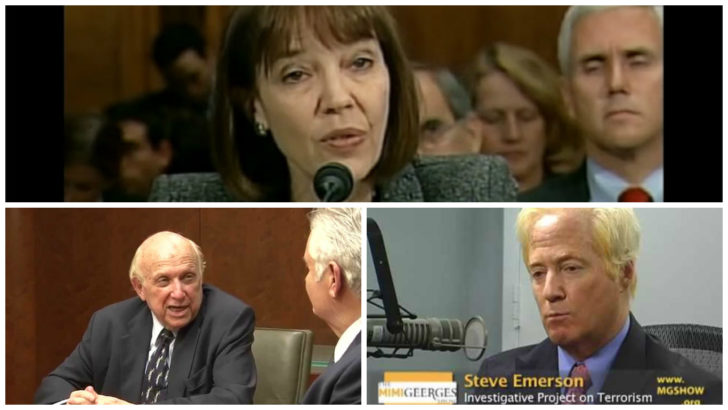 RT and others have reported that former New York Times reporter Judith Miller tweeted about Chelsea Manning’s pardon: “How many people died because of Manning leak?” (Answer: one person.)

In response, numerous people tweeted back that Miller’s promotion of falsehoods that led to the Iraq war cost the lives of at least a million Iraqis and 4,424 US troops (plus 31,952  wounded).

Miller’s sources for the misinformation largely came from Ahmed Chalabi and his patrons Richard Perle, Paul Wolfowitz, and Douglas Feith, known for their pro-Israel stances.

According to journalist John Sugg, in a 2005 CounterPunch article, Miller had been writing “carefully calculated propaganda” for years before her writing on Iraq.

Sugg quotes an excerpt from a 1996 review of Miller’s book, God Has 99 Names, by renowned academic Edward Said:

Miller “trades in ‘the Islamic threat’ — her particular mission has been to advance the millennial thesis that militant Islam is a danger to the West. … books like Miller’s are symptomatic because they are weapons in the contest to subordinate, beat down, compel and defeat any Arab or Muslim resistance to U.S.-Israeli dominance….”

“…Israel and the United States, and their intellectual flacks, have …. played a combative, even incendiary role in stigmatizing and heaping invidious abuse on an abstraction called ‘Islam,’ deliberately in order to stir up feelings of anger and fear about Islam among Americans and Europeans. …

“Perhaps Miller’s most consistent failing as a journalist is that she only makes connections and offers analyses of matters that suit her thesis about the militant, hateful quality of the Arab world. I have little quarrel with the general view that the Arab world is in a dreadful state, and have said so repeatedly for the past three decades. But she barely registers the existence of a determined anti-Arab and anti-Islamic U.S. policy. She plays fast and loose with fact.”

Miller first surfaced on my radar about a decade ago. Her close confederate was Emerson. [Steven Emerson is also Jewish-American, and is known for anti-Muslim claims that usually turn out to be inaccurate.] Both had been engaged in a furious campaign attacking virtually every Arab and Muslim voice in America. Emerson–who also at various times claimed to be a journalist–lost his foothold as a commentator among most responsible media, especially after he tried to pin the Oklahoma City bombing on Muslims.

Emerson’s most noteworthy crusade has been against a Tampa professor, Sami Al-Arian. Emerson and an ally at The Tampa Tribune were relentless. I eventually exposed many of Emerson’s and the Trib’s distortions and exaggerations. More important, the top FBI counterterrorism chief told me Al-Arian had not committed any federal crimes, and the lead federal prosecutor in the case also said there was no evidence to prosecute.

My heavily documented revelations about Emerson provoked him to retaliate via a lawsuit. Noteworthy, the lawyer he went to for advice was Floyd Abrams, most recently in the news as Miller’s attorney. That’s only fitting.

We spent four years litigating with Emerson, and finally prevailed in both federal and state courts. The final blow to his case came when we obtained an order compelling him to show proof of his allegations. He wouldn’t–couldn’t?–and he ran away.

During the litigation, one of the most interesting insights that I gleaned were reports of meetings held that involved Miller, Emerson, arch-Islamaphobe Daniel Pipes–and a number of other people we now call “neo-cons.” All of these people had strong ties to the right-wing Likud party in Israel. Heck, Miller had even sat in on Israeli “interrogation” sessions of Palestinians; and Emerson provided beds in his Washington apartment to Likud spooks who slipped into the United States to try and undermine peace negotiations.

Keep in mind, it took 9/11 to restore a veneer of credibility to Emerson as an “expert” on terrorism.

Many people, including me, had predicted years ago that terrorism would reach our shores. If we declare we are on the road to inevitable conflict with a culture and religion, and pursue policies that reflect such belligerence, it’s likely to happen. (Of course, missing from Miller’s, Emerson’s and Pipes’ breathless predictions about terrorism striking America is the fact that it long ago had. The Islam-haters neglect to notice the thousands of terrorist events in the United States committed by fundamentalist Christians who hate blacks or oppose abortion, not to mention the scores of bombings and murders committed by right-wing Cubans in Miami. Indeed, the only three actual Middle East-related terrorist events in Florida, including an assassination attempt on a former Israeli prime minister, were committed by radical supporters of Israel, not by Arabs or Muslims. But you’re not supposed to know that.)

Emerson’s and Miller’s mission had always been to depict all Muslims as likely terrorists–to foster the idea of a “conflict of cultures.” One of the more enlightening explanations of that process was “The Green Peril,” a 1992 Cato Institute paper by Leonard Hadar, a former bureau chief for the Jerusalem Post. In descriptions that, looking back 13 years, are near-prophetic, Hadar describes how the “green peril”–Islam–will be substituted for the “red menace.” The process, Hadar wrote, will involve government leaks that, without skepticism, are echoed by the media, creating fear and distrust in the nation.

In other words, a perfect description of the work of Judith Miller.

Prior to 9/11, the Tampa federal probe of Al-Arian had stalled. This was unacceptable to the neo-cons and their Likudnik allies; Al-Arian was arguably the most prominent advocate for Palestinians in America, and had gained audiences with many Congressmen and even the White House (George Bush welcomed him in a 2000 campaign photograph). Thus, Israel conjured up “intelligence”–not actual documents and information that could be vetted and responded to by Al-Arian, but shadowy insinuations much like Miller’s WMD claims. Miller, in fact, was one of the water-carriers for the Israeli “intelligence.”

The essence of the work of people such as Miller and Emerson is to blur the distinctions among Arabs. Palestinians have adopted horribly reprehensible and self-defeating tactics, but they are nonetheless an indisputably oppressed people. The tactic is to equate Palestinians, with their justifiable claims to nationhood, with the criminal madmen of Al-Qaida. It’s an effective technique. And it’s clearly the party line from Likud. Former Israeli Prime Minister Benjamin Netanyahu, when asked what 9/11 would mean for American-Israeli relations, responded: “It’s very good.” Realizing his maladroit gaffe, he then added: “Well, it’s not good, but it will generate immediate sympathy” for Israel from the United States. The fact that no Palestinian had anything to do with 9/11 is a mountain-size distinction intentionally overlooked by Netanyahu–and Emerson and Miller.

In the post-9/11 anti-Arab frenzy, Al-Arian was bushwhacked on the Bill O’Reilly show. The new “intelligence,” thanks to Miller and The Tampa Tribune led to Al-Arian’s indictment. His trial has been going on for months in Tampa. The government has repeatedly been caught prevaricating–including claiming Israeli intelligence wasn’t involved in the prosecution, only to be exposed by an Israeli newspaper, Ha’aretz (and me).

Without doubt, Al-Arian had secrets, including participation with the Palestinian Islamic Jihad. But that involvement appears to have been during a period when it was legal, and the government has had a hard time showing that Al-Arian actually did anything illegal. But justice was never the purpose of the trial–or of the work by Miller and Emerson. The judge in the case has dictated that jurors are supposed to hear only about the deaths of innocent Israelis and never about the far more numerous deaths of innocent Palestinians. In this Kafkaesque setting, if Martin Luther King Jr. were on trial for civil disobedience, he wouldn’t be allowed to mention Jim Crow, lynchings or the Ku Klux Klan.

Reading the latest about Miller wasn’t a surprise. I’d seen it before in her alliance with Emerson and her catering to the neo-cons behind the Al-Arian prosecution. She’s not a journalist. She’s a convenient tool for some very bad people.