You Are Here: Home → U.S. is in Middle East ‘to protect Israel’ not for oil, Trump says

U.S. is in Middle East ‘to protect Israel’ not for oil, Trump says 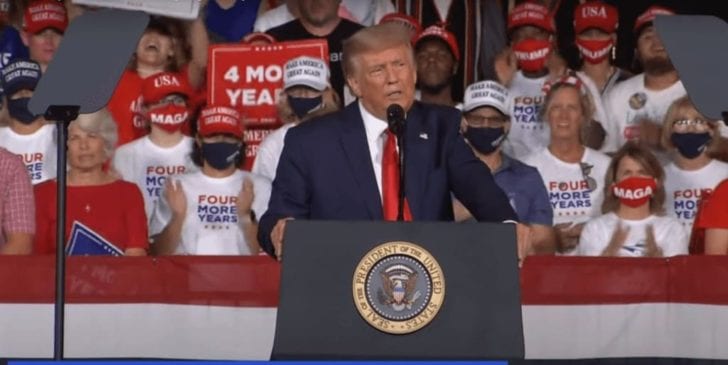 Four days ago, Donald Trump said the U.S. isn’t involved in the Middle East for oil, but because we “want to protect Israel.” The comments have gone all but unreported in the mainstream press.

Trump made the comment during a rally in Winston-Salem, N.C. on Sept. 8, when he was bragging about America’s energy independence, which he said Joe Biden would undermine if he gets the White House (minute 47):

I like being energy independent, don’t you? I’m sure that most of you noticed when you go to fill up your tank in your car, oftentimes it’s below two dollars. You say how the hell did this happen? Thank you President Trump! Look at your electric bills and everything else– these guys, your electric would go up four, five, six times. The Green New Deal it’s called the Green New Nightmare. While I’m president, America will remain the number one producer of oil and natural gas in the world. We will remain energy independent. It should be for many many years to come. The fact is, we don’t have to be in the Middle East, other than we want to protect Israel. We’ve been very good to Israel. Other than that, we don’t have to be in the Middle East. You know there was a time we needed desperately oil, we don’t need that anymore. We have more than they do, isn’t that nice? After years of rebuilding other countries, we are finally building our country.

The American Conservative’s Barbara Boland is the only reporter who seems to have picked up Trump’s remarks. No one else cares, evidently.

Do you remember all the arguments about Why are we engaged in so many conflicts in the Middle East? And why we are going to war in Iraq? And the mainstream default position is that it’s because of oil. Even though we lost concessions in Iraq.

These comments by Trump, the disrupter, tie into the long but shadowy pedigree of analysis from policymakers that we invaded Iraq to make Israel safer. Like the former head of the 911 Commission who said that the threat to Israel was the motivation for the war, but that was “the threat that dare not speak its name.” Or Colin Powell’s comment that we went into Iraq because the Secretary of Defense bought the neoconservative arguments of “the JINSA crowd,” referring to the Israel lobby group the Jewish Institute for National Security Affairs.

Trump touches on a larger realpolitik understanding of the creation of Israel, that it helped foster unrest throughout the region. As the State Department warned that it would do, in the 1940s. But don’t expect anyone in our media to consider such ideas…

The Transparent Cabal: The Neoconservative Agenda, War in the Middle East, and the National Interest of Israel

Trita Parsi: On Iran, Is It Trump Versus His Own Neocons?