You Are Here: Home → 2 stories of the 1st day of school in the Palestinian Territories 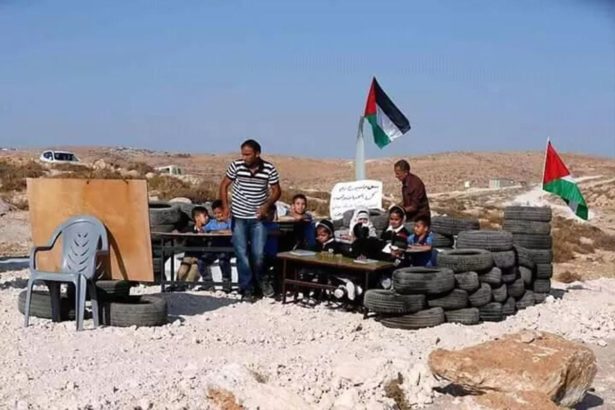 After Israeli forces demolished their school building, Palestinian students and teachers set up a makeshift school

300 children in Israeli prisons are not in school so far this year. At least one school – in Hebron – was demolished, and its furniture confiscated several weeks ago, but classes started anyway. Education is a basic human right.

IMEMC: Over 300 Jailed Palestinian Children Did Not Attend the 1st Day of School

As the school year in the occupied Palestinian territories begins, more than 300 Palestinian children imprisoned by the Israeli occupation did not go to their schools today.

Director of Palestinian Prisoners Centre for Studies Raafat Hamadaouna said, on Monday, that the Israeli occupation “deprives the Palestinian children from their simple rights –going to school.”

Hamadouna said that the number is higher than 300, but, due to the lack of official statistics because of Israeli restrictions, he did not give an exact number.

The director of the NGO said that there are also three girls among the Palestinian children inside the Israeli occupation jails.

In addition to preventing Palestinian children from their right to be educated, the Israeli occupation prevents more than 1,200 patient Palestinian prisoners from proper treatment, including 400 suffering from chronic diseases.

According to Days of Palestine, rights groups estimate the number of Palestinians inside the Israeli occupation jails to be some 6,500, including more than 400 under administrative detention, without charge or trial, 60 women and eight MPs.

Palestinian students and teachers started the new academic year on the rubble of their West Bank school which had been destroyed by Israeli occupation forces one and half months ago.

Safa news agency reported that the Khelat Al-Daebe school in occupied Hebron reopened yesterday but classes were held on the rubble of the former building.

Students sat on tyres which had been set up to form classrooms.

Representative of the Anti-Settlement Committee in the West Bank Rateb Jabour told Safa that the Palestinian students and teachers insisted on starting the new school years on time.

He noted that the Israeli occupation confiscated the school’s furniture, including caravans used as temporary classrooms.