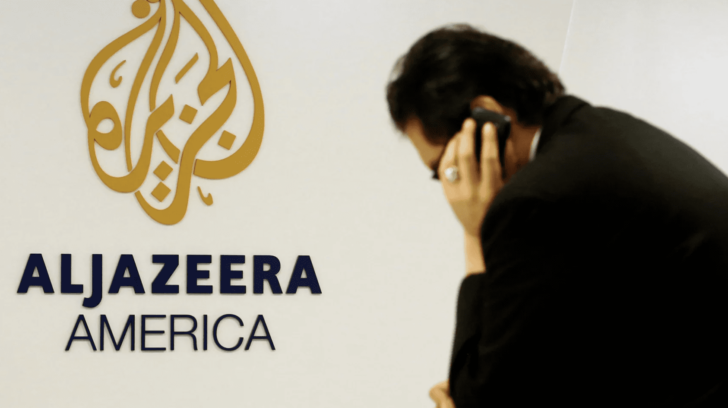 A man working at a desk in the Al Jazeera America broadcast in New York. Credit: REUTERS

WASHINGTON – Video excerpts and new details from the censored Al Jazeera documentary about the Israeli lobby in the United States have been leaked to select media outlets in recent days.

The documentary, which was produced by an undercover reporter who infiltrated pro-Israeli groups in the U.S. in 2016, has been censored by the Qatari government – the owner of Al Jazeera – as part of an attempt by Qatar to win the support of major Jewish American organizations.

Excerpt from Al-Jazeera documentary on Israeli lobby in the U.S. Credit: Grayzone Project / YouTube. [The video is also on the If Americans Knew Youtube channel.]

New details about the contents of the censored documentary appeared this week in the French monthly newspaper Le Monde Diplomatique, and video excerpts from it were published by Max Blumenthal and on the website Electronic Intifada.

Two sources from pro-Israeli organizations who were contacted at the time by Al Jazeera’s undercover reporter confirmed to Haaretz on Thursday that the new video excerpts were indeed filmed by the reporter, who has gone underground since early 2017.

The reporter managed to become an intern at The Israel Project, a pro-Israeli organization in Washington, as Haaretz first reported last year.

In one of the leaked excerpts from the film, he is seen speaking to one his bosses at The Israel Project, who tells him that Adam Milstein, an Israeli-American millionaire who supports a number of pro-Israeli groups in America, has been funding the secretive organization Canary Mission, which targets activists against Israel and the occupation on American campuses.

Milstein denied this week, following the publication of this excerpt from the film, that he has been funding Canary Mission, which has been criticized by other pro-Israeli organizations for its aggressive tactics.

Another excerpt shows how a “pro-Israeli” demonstration of American college students is put together, even though some of the demonstrators are in fact not interested at all in the subject.

The Al Jazeera reporter joined a group of students who received a fellowship from the right-wing Hoover Institution, and they are seen telling him that their presence in a small pro-Israeli demonstration has been declared mandatory by their supervisors.

“This is actually the first foot-soldier activity that we’ve been forced to do,” one of the students says. Another describes it as “a chance to shout at Arabs” who will protest against Israel at the same location.

The released excerpts are just a small part of the material currently being held back by Qatar’s government. The undercover Al Jazeera reporter spent months working on the project in Washington. During this period, he also hosted junior workers from the Israeli embassy in Washington at an apartment which he rented in the city’s Duopont Circle neighborhood. Sources in the pro-Israeli community believe the apartment was full of recording devices.

Since June 2017, Qatar has been placed under a partial blockade by two of its neighbors, Saudi Arabia and the United Arab Emirates. As a result of that blockade, Qatar has intensified its lobbying efforts in the United States, in hopes of convincing the Trump administration to support it in the spat with the Saudis and the UAE. A major pillar of that lobbying effort has been an attempt by Qatar to win over the support of major Jewish American organizations, especially those considered right-wing and supportive of the Israeli occupation of the West Bank.

Qatar has invested millions of dollars in courting those Jewish organizations. That has included first-class flights and luxurious visits to Doha that were offered to influential figures in the American Jewish community; six-figure donations to right-wing Jewish organizations; generous honorariums paid to certain individuals who spoke favorably of Qatar after visiting the country, such as Mike Huckabee, a former Republican politician and the father of President Trump’s press secretary, Sarah Huckabee Sanders; and other expenses.

One result of the Qatari lobbying campaign has been the censoring of the undercover Al Jazeera film on the Israel lobby. Qatar, despite denials issued by its government, cut a deal with some of the Jewish American groups to censor the Al Jazeera film, in return for messages of support and appreciation for Qatar by those groups. This has raised the question of whether Al Jazeera is an independent media outlet, as it portrays itself, or a media arm of the Qatari government.