You Are Here: Home → Zionist head of major theological consortium has been pushed out

Zionist head of major theological consortium has been pushed out 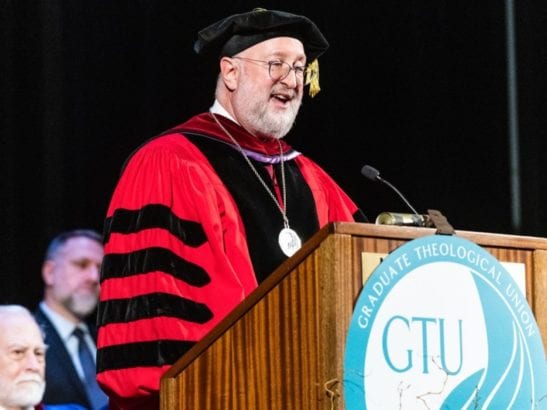 Rabbi Daniel Lehmann at his inauguration as president of the Graduate Theological Union, October 24, 2019, Berkeley, California.

Amid concerns about Rabbi Lehmann’s ‘Islamophobic statements and anti-Palestinian views,’ the GTU board accepted his resignation. The Interim president will convene a ‘healing task force’ and support Palestine programs…

By If Americans Knew staff

Rabbi Daniel Lehmann has resigned as president of the Graduate Theological Union (GTU) after concerns surfaced about his ‘Islamophobic statements and anti-Palestinian views’. GTU is reportedly “the most comprehensive center for the graduate study of religion in North America.”

Based in Berkeley, California, GTU has long been known for its commitment to justice, peace, and interfaith cooperation. It consists of eight Christian schools and nine academic centers and affiliates. It includes diverse faiths, including Hinduism, Buddhism, Islam, and Judaism.

Upon being named GTU president in 2018, Lehmann’s statements to news media suggested that he had expected to change what he called GTU’s “progressive Christian” orientation.

Instead, community members pushed Lehmann out over his attacks on a respected Berkeley professor, his “racist” views, and his support for “an apartheid regime.”

Lehmann’s record had been detailed in an article by Alison Weir last September, which had led to concern among GTU students and faculty. Handouts with information from Weir’s report were then distributed by activists at Lehmann’s inauguration.

A few months later an An Open Letter to the Leadership of the GTU was published on the Internet stating that Lehmann’s espoused views “contradict the freedom struggles of people of color and Palestinians, GTU’s tradition of solidarity with people suffering violations of systemic harm and the International Declaration of Human Rights.”

The letter urged GTU to take four actions on the issue. These included issuing apologies to the Muslim community and a local professor, and for GTU “to declare commitment to social justice within a transnational scope,” and state that this is violated “by the racist, apartheid nature of Israel and political Zionism.”

The letter was signed by 96 GTU alumni and former faculty members and 114 other national clergy and Bay Area community members.

President Lehman initially apologized, but then several days later announced his resignation. The GTU Board accepted Rabbi Lehmann’s resignation, stating in a letter to the GTU community:

“After a great deal of reflection, discussion with loved ones, and thoughtful conversation with the Board of Trustees, Rabbi Daniel Lehmann has informed the Board of his decision to resign as President of the Graduate Theological Union. We have accepted his resignation, agreeing that this is the best way forward for the institution’s leadership at this time. We greatly appreciate Rabbi Lehmann’s service, and he will continue to be an ardent supporter of the GTU.”

The letter went on to say:

“Our hope is to move forward in a spirit of unity – one that models our institution’s core mission and commitment to serving as a home for interreligious scholarship and dialogue that energizes our vital work towards creating a more peaceful, just, sustainable, and hopeful world.”

The board named as Interim President GTU Dean Dr. Uriah Kim, who subsequently met with Open Letter representatives. The representatives then sent a letter to Open Letter signatories saying: “We were very encouraged by this meeting and urge you all to support Dr. Kim and the GTU as they move forward into this new chapter of their institutional life.”

1. A six member “Healing Task Force” will be convened made up of 2 faculty, 2 students, and 2 trustee members to engage in ways to heal the wounds that have been inflicted during this difficult time.

2. An 18 member “Diversity Task Force” will be convened to address the issues of diversity and inclusion at the GTU.

3. The GTU will engage in a strategic planning process to guide the institution into the years ahead knowing that theological education must develop new models to survive and be relevant.

4. Dr. Kim supports development of Palestine programs and curriculum through the Islamic Studies Center and invites us to partner with them for this intention.

Lehmann had expected to transform GTU

Lehmann had previously been president of Hebrew College outside of Boston, described by Lehmann as “a Zionist institution with strong bonds to Israel.”

Lehmann was particularly proud of being the first non-Christian head of GTU. After he had been named president, Lehmann had noted the ways he expected to have an impact:

“I’m coming as an outsider to the dominant Christian culture that has nurtured GTU,” he told Baltimore’s Jewish Living, “and that’s inevitably going to bring a different set of perspectives.”

“I’m pretty out there as a Zionist and politically centrist, while most GTU leadership has been on the progressive Christian side,” he told Jewish News Service.

He had told the Jewish News of Northern California: “The kind of Christian dominance and hegemony, which is so much a part of American history, is being transformed.”

AN OPEN LETTER TO THE LEADERSHIP OF THE GRADUATE THEOLOGICAL UNION