You Are Here: Home → Why media reports on Palestine are consistently inaccurate 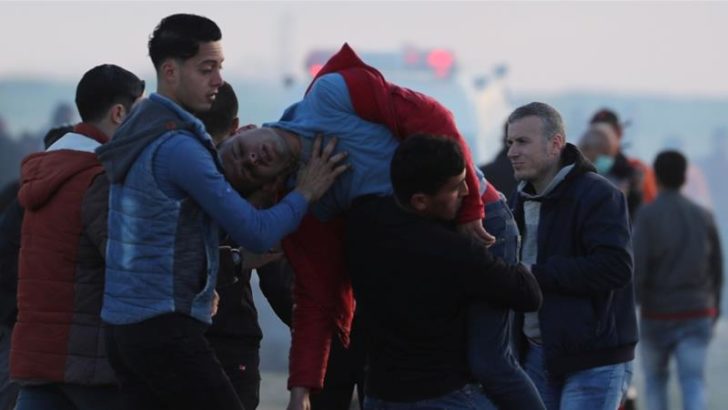 Reporting on Palestine fails to include context. Pictured: a wounded Palestinian is evacuated during a protest at the Israel-Gaza border fence, east of Gaza City on February 22, 2019

The Israel lobby has created an atmosphere in which journalists shy away from honest reporting on the Israel/Palestine issue. They are so fearful of being labeled anti-Semitic, they “daren’t even ask the [necessary] questions.”

Often dubbed an open-air prison on account of Israel’s and Egypt’s ongoing air, land and sea blockade of the coastal enclave, Gaza is, according to Amnesty International and several other rights groups, on the brink of a humanitarian disaster.

In February, Antonio Guterres, the United Nations secretary-general, highlighted the crisis, saying that the near two million Palestinians of the besieged strip “remain mired in increasing poverty and unemployment, with limited access to adequate health, education, water and electricity”.

But the mainstream media does not always succeed in telling Palestine‘s contemporary story with accuracy and empathy.

On Thursday, in the Scottish city of Glasgow, experts discussed the media’s role in covering one of the most pressing and divisive issues in international politics.

Al Jazeera interviewed three of the panelists before the event, which was hosted by The Balfour Project, a campaign group created by British citizens to raise awareness over Britain’s record in Palestine before and during its Mandate.

“You always come under particular pressure with [reporting on events in Israel and Palestine] because there is an intense and concerted Israeli media lobby – and there always was,” said Sarah Helm, a former foreign correspondent for the UK’s Independent newspaper. “And that includes a very intense Israeli political lobby working at every single level, which there always was too – and that was no secret and nor would they make a secret of it.”

She was based in Jerusalem in the 1990s.

Helm said that her editors would often come “under pressure from the Israeli lobby in London on what correspondents out in the field were doing in a way that was not really true… [for] other foreign stories”.

“Because newspapers have been got at and persuaded and pressurised by the pro-Israel lobby, the upshot over time is that the reader hasn’t got a clue what this place [Palestine] is.”

David Cronin, for example, who had freelanced for The Guardian, wrote in 2015 about his frustrations with the newspaper in Electronic Intifada, where he acts as an associate editor.

Having reported about atrocities against Palestinians committed by Israel, the paper was later “not keen to have me writing from Gaza”, he said, adding that one editor advised him to steer clear of covering the conflict altogether.

Reporting on Palestine without context

This includes the fact that seven out of 10 Gazans are registered as refugees, with many originating from families who were forced to flee their homes after Israel’s foundation in 1948.

“It seems to me that certain absolutely fundamental facts have to be high up in any story,” Helm said.

The Western media narrative has been dominated by Israel during the entire 70-year conflict, according to Ilan Baruch, the former Israeli ambassador to South Africa.

“Israel was brilliantly successful in offering a narrative to the western hemisphere that was embraced with little or no objective judgement,” said Baruch, who resigned from the foreign service in 2011 because he felt he could no longer represent the Israeli government’s policies.

Sir Vincent Fean, a former British consul-general in Jerusalem, said that Gaza’s “complex and deep-rooted” struggle has diminished the “appetite of Western media”.

“In addition to the fatigue, there is also the fact that other crises in the Middle East are bloodier, like Syria and Yemen,” said Fean, who was the UK’s top-ranking consular officer in Jerusalem from 2010 to 2014. “They take some of the oxygen away from the issue.”

In 2017, Mariam Barghouti, a Palestinian-American writer based in Ramallah, wrote in a column for Al Jazeera: “The mainstream media focus is always on Palestinian reaction and not on Israeli action and it insinuates that Palestinians are on the offence when in fact they are on the defence.”

In suggesting a way forward, Helm said: “Editors must have the courage of their convictions” to insist historical context enables the reader, listener or viewer to understand the conflict.

As several critics of Israeli government policy find themselves accused of anti-Jewish racism, Baruch, the former Israeli ambassador to South Africa, said the debate needed to move past conflating these two notions.

“Even criticising Zionism as the inspirational movement that created Israel is not anti-Semitism,” he said. “[The anti-Semitism charge] is just a ploy to pull down criticism of Israel.”

Alasdair Soussi is a freelance journalist, who has worked across Africa, Europe and the Middle East.