You Are Here: Home → PBS adds pro-Israel headline to its own report on Israeli attacks in Gaza 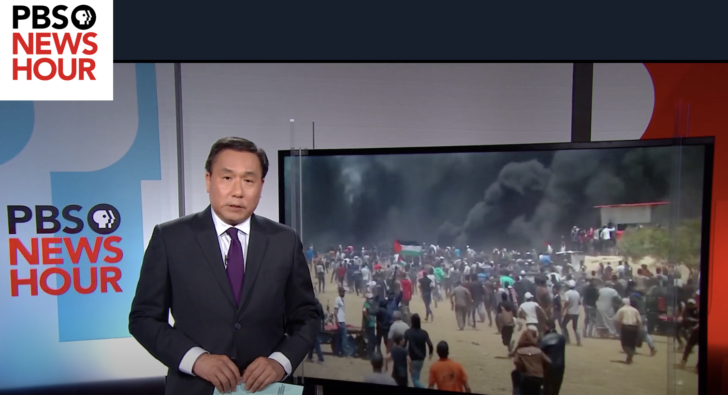 PBS recently presented an excellent report on Israeli sniper violence at the Gaza border, but headlined it with a pro-Israel slant. The truth is simply too damning to be presented un-spun to an American audience.

Last week PBS ran a brilliant piece from Gaza by Jane Ferguson that highlighted Israel’s maiming of hundreds or thousands of young protesters with leg-shattering rifle-shots.

The focus of the piece was Dr. Adnan al Borsh, a surgeon, who described in precise English the explosive nature of the wounds and his efforts to save young Palestinians, captured by a photograph of him falling asleep in an operating room chair at 1 a.m. on May 14, 2018, the day that Israel killed over 60 protesters.

The sympathy of the piece was entirely with young men who had once loved to play soccer in their open-air prison. Ferguson:

“Most of these kids have never seen the outside world, trapped in a tiny strip of land under blockade by the Israeli government and ruled over by the militant group Hamas.”

I watched this report last week as a rapt amateur, with my heart in my throat. Another excerpt:

Ferguson: Waleed and his friends say they were unarmed, protesting near the border fence, when he was shot by a sniper.

I was planning to celebrate the PBS New Hour, then I saw the packaging of the report. The title on the PBS site is: “Gazans suffer life-shattering injuries when border protests turn violent.” And host John Yang — I missed this when I was sitting at dinner — put the blame on the Palestinians in his intro:

For many months now, Palestinians in Gaza have regularly protested their conditions along the border fence with Israel. Those protests have often turned violent, resulting in deaths and permanent injuries.

Militant Palestinians have lobbed rockets and gunfire at Israel, especially targeting the soldiers at the border. But some international observers say the response of late has taken a disturbing turn.

These are… lies. There was nothing in the report to justify such a misrepresentation. Ferguson never mentioned gunfire. She did say that Palestinians sometimes send flaming kites over the border that can burn farmland, and that “the most cynical here encourage the smallest to approach the fence, goading Israeli guards.” There has been no “disturbing turn” lately.

The repeated judgment in the piece was: Israel shooting these protesters is a war crime.

Ferguson: Human rights groups say this is a war crime…

Ferguson: in a damning report released in March, the United Nations’ independent commission of inquiry disputed [the Israeli justification], saying the Israeli military sniping at protesters was unlawful and unjustified, and should be referred to the International Criminal Court at The Hague.

The U.N. noted that some protesters threw stones and lit kites on fire to send across the fence, but the majority were peaceful civilians. Israeli soldiers, the commission said, shot and killed children, paramedics, journalists and the disabled, fully aware of who they were.

So Ferguson all but dismissed Israeli denials of the charge, and her piece took the p-o-v of a protester, Amin Asleep:

“I come every Friday, and I would come every day if the protest was every day. We in Gaza have nothing to do, no work. All of these people around don’t have a single shekel, because we are living under the siege. And the siege is constant.”

It’s hard to convey how disgraceful John Yang’s setup was and the News Hour’s packaging. It shows that the truth is simply too negative to Israel to be handed over to an American audience unspun. And yes I am completely cynical about PBS’s motivation. It is afraid of the Israel lobby, it is afraid of donor mutiny. So it lies about its own reporter’s story.

And here’s the proof, an Israel lobby group attacked the report last week for “humanizing” Palestinians, and said PBS “cripples the truth.” PBS anticipates that sort of attack. It is accountable to racists.

Addendum: There have been six Israeli fatalities at the border in the last 17 months, the UN says: one fatality to an Israeli soldier from the Great March of Return protests, but five others from Palestinian hostilities. The UN also counts 6 injuries to Israelis from the protests, and 188 at the border overall.

Thanks to James North and Allison Deger.

PBS: Frontline says it may never broadcast the Gaza documentary