You Are Here: Home → Weir’s book on the hidden history of the Israel lobby published in Spain 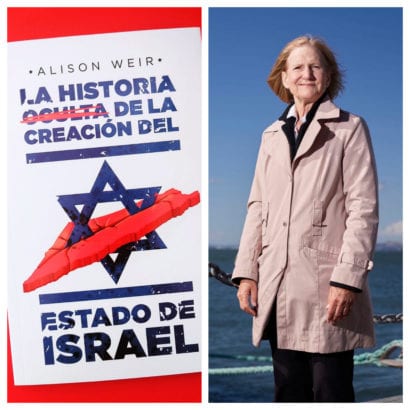 Alison Weir’s book, which has sold over 50,000 copies in English, has just been published in Spain and has been featured in the “most-read” Spanish-language newspaper on the Internet…

Alison Weir’s book “Against Our Better Judgment: The hidden history of how the U.S. was used to create Israel” has just been published in Spanish by Capitán Swing, a Madrid book publisher. The Spanish title is “La Historia Oculta de la Creacion del Estado de Israel.”

The original, English language version of the book has so far sold over 50,000 copies and has been a best seller on Amazon, where it has received over 700 5-star customer reviews.

Weir’s book has been praised by diverse experts on the topic, including a U.S. ambassador, U.S. Senator, U.S. Congressman, and others.

The book details the actions, both public and covert, by members of the Zionist movement to push the U.S. into supporting their efforts to establish a Jewish state in Palestine.

The Capitán Swing synopsis of the book states (translated into English):

Shortly after World War II, US Secretary of State Dean Acheson warned that the creation of a Jewish state on lands already inhabited for centuries by Muslims and Christians would “endanger” both American and Western interests in the region. Despite warnings like this and the strong objections of the leading diplomatic and military experts of the time, President Truman supported the establishment of modern Israel in Palestinian territory. As Weir shows, American politicians were bombarded by massive pro-Israel lobbying from well-funded Zionist organizations to a “secret society” whose members included Supreme Court Justice Louis Brandeis.

The story of how the Zionists manipulated the US government and media to advance Israel’s interests remains “hidden” from the general public… Those who have tried to bring this information to the general public have suffered verbal attacks and economic threats that quickly silence the message and often destroy the messenger. But Weir’s book offers an unequivocal answer: The United States played a pivotal role in creating the Jewish state in the Arab lands of Palestine, at the expense of its inhabitants and its own interests.

Weir, a journalist based in California, is the founder of the think tank If Americans Knew and president of the Council for the National Interest. She writes and speaks widely on Israel-Palestine and the U.S. connection despite receiving a death threat early in her work on this issue. Israel partisans frequently attempt to block her talks and suppress her book.

The lobby for Israel continues today. It is particularly influential in the United States, England, to a somewhat lesser degree, in France, and in numerous other countries around the world. A speech by Weir can be seen here.