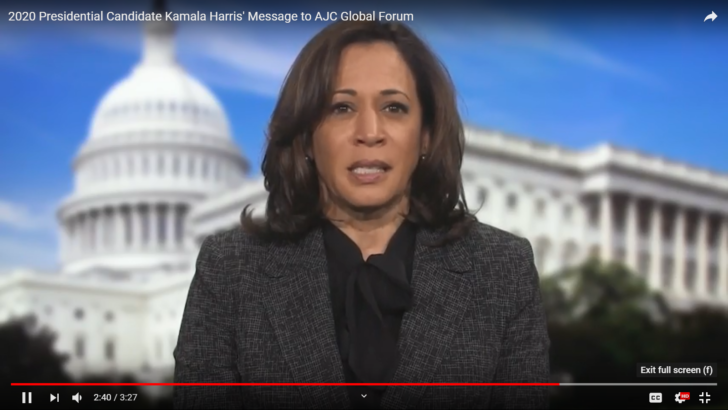 Almost all the top presidential candidates provided videos of support to the American Jewish Committee for its 2019 Global Forum in Washington D.C. The AJC is known for its advocacy for Israel and its work to destroy the international movement to boycott Israel over Israel’s human rights abuses against Palestinians. See the videos below…

Over half of the 2020 presidential candidates recorded videos of themselves for this year’s American Jewish Committee Global Forum.

The videos are posted on the AJC website and below.

All the candidates except two spoke in support of Israel, many claiming it is an important American ally. All ignored Israel’s pattern of spying on the US and stealing American technology, attacking a US Navy ship, the cost of Israel to Americans, and the role of Israel partisans in pushing the US into disastrous wars.

The only candidates who did not mention Israel were Tulsi Gabbard (D – HI) and Corey Booker (D-NJ), whose videos focused on opposition to antisemitism. (In the past, Booker has been extremely outspoken in his support for Israel.)

Bernie Sanders (D-VT) went into the greatest detail on the issue, emphasizing his support for Israel while also discussing Palestinian suffering.

Sanders spoke of his Jewish ethnicity and pointed out that as a young man he had lived in Israel for a number of months. He emphasized that he “believes absolutely and unequivocally in Israel’s right to exist in peace and security” and said, “to oppose the reactionary policies of Prime Minister Netanyahu does not make anyone anti-Israel.”

At the same time, Sanders spoke of  the “Palestinian people crushed underneath a military occupation now over a half century old, creating a daily reality of pain humiliation and resentment.” [Note: Israel’s expulsion of Palestinians began 72 years ago.] He said: “I do not know how peace can be achieved in that region when in the Gaza Strip poverty is rampant – 53 percent of the people are unemployed….”

California Senator Kamala Harris and many others emphasized their strong support for Israel. In Harris’s video she mentioned both her past record of working for Israel and her plans to continue this in the future:

“As a member of both the Senate Intelligence Committee and the Senate Homeland Security Committee I am deeply involved in ensuring the American-Israeli relationship remains strong.”

Harris promised: “I will do everything in my power to ensure broad and bipartisan support for Israel’s security and right to self-defense, that is why I strongly support America’s security assistance to Israel and I am committed to strengthening the American Israeli security and defense relationship.”

The U.S. currently gives Israel over $10 million per day. A bill before the Senate, favored by Harris, proposes to give Israel a 10-year package in which it will receive a minimum of $38 billion ($7,000 per minute) – approximately $20,000 per each Israeli family of four.

This is expected to pass easily despite the fact that most Americans feel the US already gives Israel too much money.

Founded over 100 years ago, the AJC says it has “more than 30 offices worldwide, plus partnerships with 34 international Jewish community organizations.” The organization, headquartered in New York City, has net assets of approximately $160 million.

According to its website: “Around the world—from the hallways of the UN in New York, to the corridors of the European Union in Brussels, and to the countries of Asia—AJC advocates for Israel at the highest levels. ”

One of the AJC’s priorities is to oppose the international movement to boycott Israel over its human rights abuses against Palestinians. The AJC website says: “We spearhead anti-BDS legislation at all levels of government and rally elected officials to reject the boycott movement.”

AJC states: “We convinced the governors of all 50 states to declare their opposition to BDS. We were also a driving force behind anti-BDS legislation in California and Illinois.

“As the BDS movement has surged on campus, we have brought dozens of university presidents to Israel and trained hundreds of students as advocates for Israel… we have marshalled our allies in the Christian world to oppose such efforts.”

According to AJC, more than 2,500 people from 70+ countries attend the Global Forum. This reportedly includes hundreds of students brought from more than 40 countries. The event is at the Washington Hilton in Washington D.C. from June 2-4. The schedule is here.

In the videos below, a number of candidates say they support a “two-state solution,” but do not mention, or are unaware, that this refers to a division in which Israel would get at least 80 percent of the territory, and Palestinians would be left with 20 percent, at most.

The candidates’ messages to AJC

Below are the videos. Underneath each video is an excerpt containing some of the candidate’s statements about Israel from the video.

“…Israel is a strong ally and an important friend to the United States. Good friends can disagree and a candid expression of concerns does not diminish our friendship…”

“…I want to be very clear here at the outset about my position: I will stand shoulder to shoulder with Israel as our strongest ally in the Middle East….. I also reject boycotts, disinvestment, or sanctions on Israel. In 2016 I not only signed on to the American Jewish committees governors United against BDS campaign but also signed into law legislation that mandates Colorado’s retirement program divest from firms that boycott Israel….. I will use America’s leadership to push for a resumption of direct negotiations for a just and lasting peace between Israel and the Palestinians.  While we do not know what the exact details of such an agreement will look like, we do know that without such an agreement there will be no assurance of peace and stability for this or future generations of Israelis or Palestinians. I have called on both parties to avoid undertaking unilateral actions which threaten such a long-term agreement and to respect the fundamental human rights of Israelis and Palestinians….”

“…As a member of both the Senate Intelligence Committee and the Senate Homeland Security Committee I am deeply involved in ensuring the American-Israeli relationship remains strong….. I will do everything in my power to ensure broad and bipartisan support for Israel’s security and right to self-defense. That is why I strongly support America’s security assistance to Israel and I am committed to strengthening the American Israeli security and defense relationship…. The first resolution I sponsored as a United States Senator was to combat ‘anti Israeli bias’ at the United Nations and affirm and reaffirm that the United States seeks a just, secure and sustainable two-state solution….. the only way Israel can remain a Jewish and democratic state is two states for two peoples living side by side. Palestinians should be able to govern themselves in their own state in peace and dignity, just as Israelis deserve a secure homeland for the Jewish people. I believe that a resolution to this conflict cannot be imposed by outside parties. It must be agreed upon by the parties themselves….”

“…I’ve always worked hard to protect the u.s. Israel Alliance, to make sure it is strong. Our nations have intertwined national security issues, which is why I made sure we fund David sling, Aero, and Iron Dome and to make sure Israel always has a qualitative military edge … I’ve always appreciated AJC’s leadership in being the leading voice for our US-Israel relationship… Thank you, AJC, for the wonderful work you do…”

Tulsi did not mention Israel, instead focusing only on opposition to religious bigotry. “… AJC has contributed so much to the advancement of religious tolerance. For years you’ve been on the front lines of breaking stereotypes and harmful assumptions…. I went specifically to visit two extremely important locations: one was Chernobyl and the other was Auschwitz. It was an experience that I will never ever forget, and the world must never forget…”

“…I value our nation’s longstanding friendship and partnership with Israel. I am completely committed to the security of Israel and recognize them as one of the most important and enduring allies to the United States. I am firmly against effort to delegitimize Israel, such as BDS…”

“…it’s almost exactly a year since I had the eye-opening experience of an AJC Project Interchange visit to Israel and the West Bank with a number of my fellow mayors. It was extraordinary to see firsthand the achievements of what’s taking place in Israel….. We need to make sure that we are steadfast in our support for Israel and for the U.S.-Israel alliance, while also continuing to advance a policy direction that is going to lead to peace and security for the Israeli and Palestinian people…. the need for a two-state solution… need to make sure that the U.S.-Israel Alliance is pointing in a direction that is going to be beneficial for Israeli, Palestinian, and American well-being….”

Booker was the one other candidate who did not mention Israel. His one-minute video focused on opposition to antisemitism: “…I want to thank the American Jewish Committee for the work you are doing to combat anti-semitism, to fight for justice, for light, for love in the face of hate and darkness. We know what Hillel said: ‘If I am not for myself who will be for me…”

“…support for Israel is too important to be a political football or a partisan issue. It’s about all that unites us as a people – our shared democratic values, our spirit of innovation and entrepreneurship, our determination to overcome every obstacle and endure.  You know I’ll never forget my first visit to Israel as a young senator in 1973… I had a great opportunity to meet Golda Meir… she told me Israel had a secret weapon for her survival. She said, ‘Senator, we have nowhere else to go.’ That’s why I’ve been so adamant that Israel be able to defend itself by itself, but we come to its aid…. I’m proud that an Obama-Biden administration demonstrated unprecedented support for Israel, including… signing a new record-setting 10-year security agreement with with Israel [$38 billion to Israel]… ”

“…let me start by thanking each of you for the work you do to advance the U.S.-Israel relationship….. Israel is a stalwart ally…. it is essential to maintain strong, bipartisan support for our ally….. We must maintain a robust MoU on security assistance to ensure Israel has the tools she needs to prepare for and defend against threats, and our long-standing bond must continue to be bipartisan…”

Sander’s speech was the longest video and the only one to mention Palestinian suffering.”…. [I believe] absolutely and unequivocally in Israel’s right to exist in peace and security…. as a young man lived in Israel for a number of months…to oppose the reactionary policies of Prime Minister Netanyahu does not make anyone anti-Israel.”…..I see a Palestinian people crushed underneath a military occupation now over a half century old, creating a daily reality of pain humiliation and resentment… I do not know how peace can be achieved in that region when in the Gaza Strip poverty is rampant – 53 percent of the people are unemployed… 99 percent of the residents cannot leave that area….  the parameters of a solution are well known. They are based in international law. They are based in multiple United Nations Security Council resolutions……  two states based on the 1967 lines with Jerusalem as the capital of both states……” [Note: Israel’s expulsion of Palestinians began 72 years ago.]

The Israel Lobby: A List
Articles about the pro-Israel lobby
The Lobby – USA Abridged documentary