You Are Here: Home → Yet Another Senator from Israel: Cory Booker shines at AIPAC 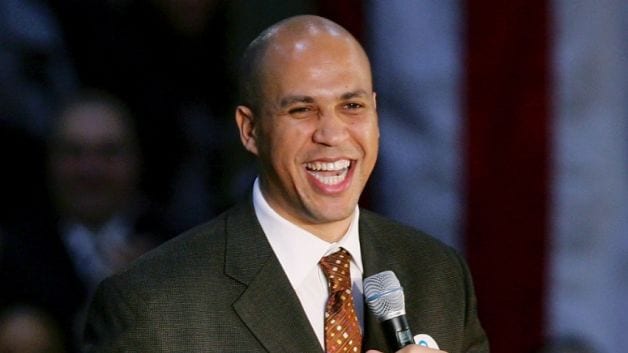 No holds barred: Cory Booker gushes that there is no “greater moral vandalism” than dividing the US and Israel; he would cut off his right hand before abandoning Israel

Giraldi sums up presidential hopeful Cory Booker: “a complete sell-out to Israel and its Jewish supporters” who tries to be “more Israeli than the Israelis.” Booker claims that there is “no greater moral vandalism than abandoning Israel,” and swears to give Israel even more money.

by Philip Giraldi, the Unz Review

How do you take a typical progressive and turn him or her into a fascist? One possible way is to send the poor bastard off on an all expenses paid trip to Israel where a meticulously crafted and sophisticated brainwashing program will make one believe almost anything regarding the noble and God-chosen Israelis versus the satanic Arab terrorists. Add into that the fact that being pro-Israel is a plus in many career fields and it is easy to understand why a monster like Prime Minister Benjamin Netanyahu gets favorable press and commentary in the United States even as he is reviled in most of the rest of the world.

The liberal to fascist metamorphosis is most evident among Democratic Party politicians, who have been successfully targeted by the Israel Lobby and its deep pocketed supporters for many years. It is all part of a massive public relations campaign, which some might instead refer to as disinformation, planned and executed by the Israeli foreign ministry and its diaspora supporters to advance Israeli interests in spite of the fact that the government of Netanyahu has implemented and executed fundamentally anti-democratic programs while at the same time committing war crimes and violating a whole series of United Nations resolutions.

Israel works hard to influence the United States at all levels. Its tentacles dig deep, now extending to local and state government levels where candidates for office can expect to be grilled by Jewish constituents regarding their views on the Middle East. The constituents often insist that the responses be provided in writing. The candidates being grilled understand perfectly well that their answers will determine what kind of press coverage and level of donations they will receive in return. 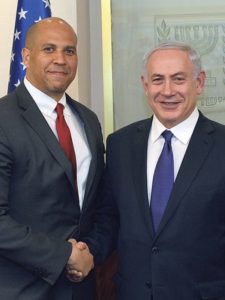 One of the most blatant propaganda programs is the sponsorship of free “educational” trips to Israel for all newly elected congressmen and spouses. The trips are normally led by Israel boosters in Congress like Democratic House Speaker Steny Hoyer, who recently boasted at an AIPAC gathering how he has done 15 trips to Israel and is now preparing to do another with 30 Democratic congressmen, including nearly all of those who are newly elected.

The congressional trips are carefully coordinated with the Israeli government and are both organized and paid for by an affiliate of the American Israel Public Affairs Committee called the American Israel Education Foundation (AIEF). Other trips sponsored by AIEF as well as by other Jewish organizations include politicians at state and even local levels as well as journalists who write about foreign policy.

As noted above, all the trips to Israel are carefully choreographed to present a polished, completely Israel-slanted point of view on contentious issues. Visits to Palestinian areas are arranged selectively to avoid any contact with actual Arabs. Everyone is expected to return and sing the praises of the wonderful little democracy in the Middle East, which is of course a completely false description as Israel is a militarized ethno-theocratic kleptocracy headed by a group of corrupt right-wing fanatics who also happen to be racists.

Even progressive politicians who are aware that the Israeli message is bogus and also resent the heavy handedness of the Israelis and their diaspora friends often decide that it is better to go along for the ride rather than resist. But some embrace it enthusiastically, like Senator Cory Booker of New Jersey, a liberal Democrat running for his party’s nomination for president, who has, by his own admission, visited Israel many times. Israel and its friends are, of course, both courting and promoting him assiduously.

Booker inevitably reminds one of ex-President Barack Obama because he is black but the similarity goes beyond that as he is also presentable, well-spoken and slick in his policy pronouncements. One suspects that like Obama he would say one thing to get elected while doing something else afterwards, but we Americans have become accustomed to that in our presidents.

More to the point, Booker was and is a complete sell-out to Israel and its Jewish supporters during his not completely successful career in New Jersey as mayor of Newark as well as in his bid for the presidential nomination. Booker is a close friend of the controversial “America’s rabbi” Shmuley Boteach and has taught himself enough Hebrew to pop out sentences from Torah with Jewish audiences.

In his own words

Last week the Intercept published a secret recording of Booker meeting with a group of Jews from New Jersey at the recently concluded AIPAC summit in Washington, which Booker, unlike a number of other Democratic presidential hopefuls, attended enthusiastically. Booker pandered so assiduously that it is hard to believe that he actually knows what he is saying in an effort to be more Israeli than the Israelis. He described an Israel that deserves total commitment from Washington and stated clearly that he wants to create a “unified front” against the nonviolent boycott movement (BDS). He said that there is “no greater moral vandalism than abandoning Israel.”

Phil Weiss on Mondoweiss sums up the high points of what Booker said and did not say in the meeting: “Donald Trump is endangering Israel’s security in Syria; there is no ‘greater moral vandalism’ than dividing the U.S. and Israel; Booker would cut off his right hand before abandoning Israel; he lobbied black congresspeople not to boycott Netanyahu’s 2015 speech because we need to show a ‘united front’ with Israel; AIPAC is an ‘incredible… great’ organization whose mission is urgent now because of rising anti-Semitism; he ‘text messages back and forth like teenagers’ with AIPAC’s president Mort Fridman; and he swears to uphold bipartisan support in the Congress for Israel and give it even more money.

And Booker says not one word about Palestinian human rights or Israel’s persecution of Palestinians. That’s right. A progressive senator who invokes Martin Luther King Jr. over and over again has not one word to say about the Jim Crow status of Palestinians while describing Israel as a ‘country that I love so deeply, that changed my life from the day I went there as a 24 year old.’” 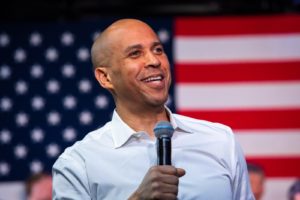 “If I forget thee, O Israel”

Booker elaborated in his own words: “Israel is not political to me. It’s not political. I was a supporter of Israel well before I was a United States Senator. I was coming to AIPAC conferences well before I knew that one day I would be a federal officer. If I forget thee, o Israel, may I cut off my right hand.”

Booker described how he is appalled by the rise of alleged anti-Semitic incidents in the U.S. and worldwide. Rather than using that possible development as leverage to get Israel to behave more humanely, he instead prefers to punish all Americans with new legislation intended to strip all everyone of their First Amendment rights. Per Booker “We must take acts on a local stage against vicious acts that target Israel. That’s why I’m cosponsor of Senate Bill 720. Israel anti-Boycott Act.”

Normally progressive Booker, who has criticized the endless war in Afghanistan on the campaign trail, has hypocritically condemned Trump for not continuing war in Syria to protect Israel, saying

We need a comprehensive strategy for that region because Israel’s neighborhood is getting more dangerous than less. Syria is becoming a highway for Iran to move more precision guided missiles to Hezbollah. There has got to be a strategy in this country to support Israel that is bipartisan that is wise and that frankly calls upon all the resources of this country, not just military”.

And because Israel always needs more money, Booker is ready to deliver: “Unequivocally 100 percent absolutely [yes] to the 3.3 billion [a year]. I have been on the front lines every time an MOU is up to make sure Israel gets the funding it needs. I even pushed for more funding.”

Do we need a man like Cory Booker as President of the United States? He is articulate enough to cite “moral vandalism” but not perceptive enough to take the concept one step further and appreciate that uncritical close ties to Israel’s feckless and fascist government could easily lead to a nuclear war that would constitute something far worse. He further believes that Israel’s hand deep in the U.S. Treasury is a desirable policy, that unlimited “all resources” support of Israel is a U.S. national imperative, that ending the continued American military presence in the Middle East “would endanger our ally” Israel, and that moves to nonviolently oppose Israel’s oppression of the Palestinians must be made illegal.

One does not see an actual American interest in any of that, but perhaps special spectacles made in Israel are needed, an environment where Booker has clearly spent a great deal of time both physically and metaphorically. Or maybe it’s the Benjamins. Booker will need millions of dollars to mount his campaign and he knows where to go and what he needs to say to get it.

One struggles to see just a tiny bit of humanity in Booker vis-à-vis the Arabs who have lost their homes and livelihoods to Israeli criminality, but none of that comes through in a session in which, admittedly, the Senator from New Jersey is speaking with his Jewish donor/supporters. Booker is on record favoring an Israel-Palestine “two state solution,” which is no longer viable, though he has not objected to Israeli army snipers shooting dead children, journalists, medical personnel and unarmed protesters in Gaza.

Frankly, we already have an American leader who puts Israel first in Donald Trump and we don’t need another round of wag the dog in our next president. Cory Booker should work hard to maintain his perfect attendance record at AIPAC as he texts “like a teenager” with Mort Fridman, but maybe someday he will actually grow up and learn to think for himself. As he is a U.S. Senator that certainly is something we might all hope for.

Philip M. Giraldi, Ph.D., is Executive Director of the Council for the National Interest, a 501(c)3 tax deductible educational foundation that seeks a more interests-based U.S. foreign policy in the Middle East. Website is councilforthenationalinterest.org, address is P.O. Box 2157, Purcellville VA 20134 and its email is inform@cnionline.org.

There’s Something Rotten in Virginia: Israel Is a Malignant Force in Local Politics