You Are Here: Home → Untold stories of everyday Israeli brutality 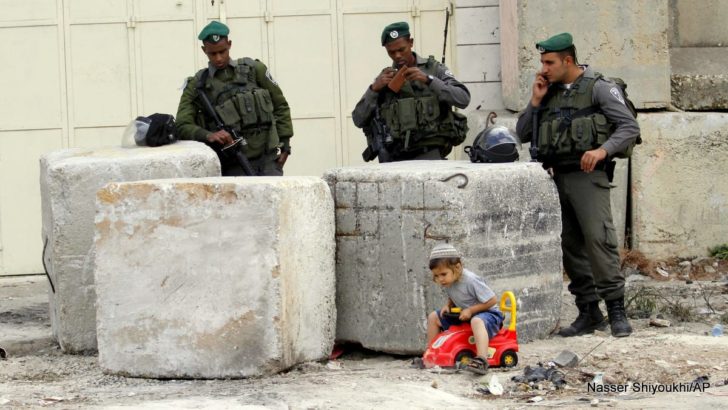 Israeli border police officers stand guard as a Jewish settler boy plays near a disputed house in the West Bank city of Hebron.

Israeli soldiers and settlers terrorize Palestinians every day. Stories from November 4-5 (that won’t appear in mainstream media) include 2 Palestinian deaths, at least 14 abductions – some of them children, a settler free-for-all in Hebron, and an injured infant.

Every day on the homepage of the If Americans Knew blog, you’ll find ten clickable headlines from IMEMC (International Middle East Media Center). The news may not be uplifting, but it’s important to be aware of the ongoing trials that are part of life under Israeli occupation. The headlines can be found on the righthand side of the page. (Scroll down just a bit.) Check them out every day.

Here are headlines from November 5:

Take a look at “Israeli Soldiers Abduct Four Children in Jerusalem.” (This one is a freebie – the rest you have to click yourself!)

Silwanic added that the five abducted children are from Silwan town and the at-Tour neighborhood, in Jerusalem.

On Monday at dawn, the soldiers abducted six Palestinians, including five former political prisoners from their homes in Jenin governorate, in the northern part of the occupied West Bank.

Furthermore, the soldiers shot a Palestinian man in his own home, and abducted his son, in Halhoul town, north of Hebron, in the southern part of the occupied West Bank. The army also abducted four other Palestinians in Hebron and Ramallah.

It is worth mentioning that the soldiers abducted, at dawn, at least seventeen Palestinians from their homes, in several parts of the West Bank.

In Nablus, in northern West Bank, a Palestinian infant was injured after a group of illegal Israeli colonialists hurled stones at her family’s car.