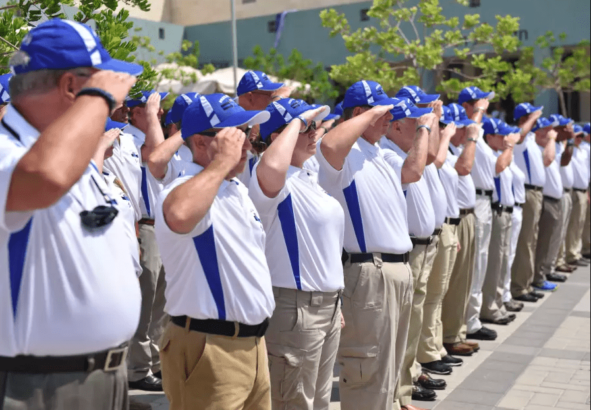 Members of the Police Unity Tour (a delegation of 52 American law-enforcement officers from 12 states who traveled to Israel for training) salute their Israeli counterparts at the Beit Shemesh police academy. (September 2017)

Every few months local police officers somewhere in the U.S. travel to Israel for training in “how to make America more secure.” At the same time, Israeli security experts are hired in the U.S. to make us “more secure.” The problem is that Israeli governmental security “experts” have perpetrated policies of such cruelty that they have made Israelis so insecure that many are leaving Israel…

We’re reposting this 2005 article since its information and satire are still relevant. (Images added)

When you’re receiving advice “free” or otherwise, it’s wise to first evaluate the source. It’s probably not the best idea to hire a squinting optometrist, a limping podiatrist, or a toothless dentist. If you’re considering a heart surgeon and a search for his previous patients turns up too many graves, perhaps it’s time to reconsider. In fact, if he’s having heart pains, in all kindness perhaps you should call him a doctor.

In this vein, it seems time to examine a growing trend in this country. American officials still reeling from 9-11 and its escalating after-shocks are increasingly turning for help to Israeli “security experts.” Every few months there seems to be another report of local police officers somewhere in the country Rhode Island, California, New Jersey traveling to Israel for training in how to make America more secure.

These trips are paid for, interestingly, by the Anti-Defamation League (ADL), an organization whose once worthy goal of opposing bigotry long ago was superseded by a very different activity: advocacy for Israel. This advocacy consists of both carrots and sticks. Our officials, understandably perhaps, are chomping on the carrots.

At the same time as these junkets to Israel, more and more Israeli security experts are being hired here at home to advise us on how to make our nation safer. They’re popping up everywhere – at the local level, in state agencies, and throughout the federal government. They’re offering their services to the state department, and military officers are visiting the highest levels of the Pentagon.

Israeli experts are assisting us abroad, as well. They helped us interrogate prisoners at Abu-Ghraib, for example, and are present at Guantanamo making us safer.

At some levels, none of this is surprising. It is certainly tempting for our financially strapped municipalities to avail themselves of a lobbying group’s generosity, and there are all sorts of truisms to apply for example, “don’t look a gift horse in the mouth.” But the one that I suspect best fits is the old “there’s no free lunch.” Even more troubling, perhaps, are the cases where our over-extended federal government and struggling local ones are paying out good money for consultants whose merit is highly questionable at best.

It seems to me that before we go any further in this headlong rush for Israeli expertise to protect American citizens, it’s important to ask how secure Israeli experts and their policies have made Israeli citizens.

Anyone who has paid any attention to the news, of course, knows the answer.

The truth is, despite Israel’s enormous military might (paid for by American taxpayers to the tune of over $10 million per day), Israelis are among the most terrified populations in today’s world. Israelis feel unsafe in their cafes, on their streets, in their homes. They’re frightened to ride their own city buses. (The wealthy, of course, don’t. They take taxis and private cars.) And going to the mall in many parts of Israel is an experience that not many Americans would be eager to replicate here. Being searched by armed soldiers in combat gear before being allowed to enter, and then shopping amid people with loaded rifles strapped to their backs as they peruse the toy section is not a delight many of us would wish to copy.

Of course, you might point out, Israelis are living luxuriously compared to Palestinians. “Only” about 1,000 Israelis have been killed in the past five years, not over 3,500. “Only” approximately 100 Israeli children have been killed compared to more than 600 Palestinian ones. “Only” 7,000 Israelis have been injured, not 28,000. The unemployment rate is “only” 10 % not 50%. Israelis aren’t suffering malnutrition, being routinely imprisoned, grotesquely humiliated, regularly tortured.

There aren’t dozens of children with eyes injured and shot out, and while there are growing numbers of Israelis in wheelchairs, they don’t yet approach the hundreds of Palestinians whom Israeli bullets have permanently paralyzed. While many Israelis are maimed – arms missing, legs gone, faces mutilated – they’re “only” a fraction of the number you find in Palestine.

Nevertheless, despite their relative comfort, Israelis are not living in a condition that I wish to emulate.

The fact is, Israeli governmental security and policy “experts” have long promulgated policies of such ruthlessness and cruelty that a tiny but lethal number of their victims finally began to fight back. In the current intifada, 140 Palestinians were killed before a similar Jewish death on Israeli soil; 84 Palestinian children were killed before a single Israeli child. Now, as Palestinian deaths continue to spiral upward, Israeli deaths, while still significantly fewer, continue to grow as well. [See Timeline of deaths.]

It’s a very simple equation. The more that Israeli “experts” increase their actions to “protect” Israelis, the more they die.

Overall, in fact, Israelis have been so well served by their officials, that Israeli citizens are leaving the country in droves (hence, I suspect, the many “security consultants” now peddling their wares in the U.S. – security experts, too, know when to leave a sinking ship). In recent years, approximately ten percent of the population has left and some former American diplomats suspect the number of Israelis fleeing their country could easily be double that.

Personally, I’m proud of America’s history as a refuge for those “yearning to breathe free,” and I believe in doing our best to welcome those whom extreme need drives to our shores. I don’t, however, want anyone to bring “security” policies and “expertise” to our country that caused them to flee their own.

I’m not surprised that so many Israelis are moving to the US. I only wish we’d stop consulting them about how to make our own nation as safe as the one they’ve just fled.

Since Weir’s article was published, many others continue to document this phenomenon, for example: