You Are Here: Home → Challenge to Israel’s Supporters: Tell Me What’s Untrue in Amnesty’s Report on Israel

Challenge to Israel’s Supporters: Tell Me What’s Untrue in Amnesty’s Report on Israel 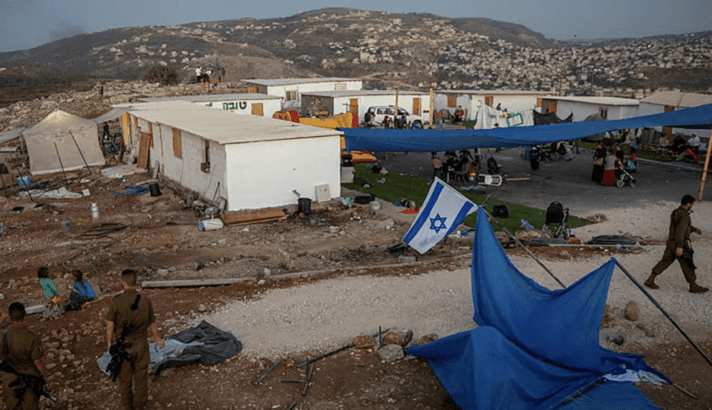 Israeli settlers and soldiers gather at the recently established wildcat outpost of Eviatar near the West Bank city of Nablus, July 2021.

Israel and its partisans want to ignore the new Amnesty Int’l report on Israeli apartheid, claiming it’s “antisemitic.” Gideon Levy insists, “What is written in the report does not stem from antisemitism, but will help strengthen it. Israel is the greatest motivator of antisemitic urges in the world today.”

As the curses and screeches subside – Amnesty are antisemites, the report is full of lies, the methodology is absurd – one must ask: What, precisely, is incorrect in the apartheid report?

Does Israel not maintain a regime of oppression and control of Palestinians in Israel and in the occupied territories for the benefit of Israeli Jews? Yes or no? True or false?

Do the rules of engagement with Palestinians not reflect a policy of shoot to kill, or at least maim? Yes or no? True or false?

Are the evictions of Palestinians from their homes and the denial of construction permits not part of Israeli policy? Yes or no? True or false?

Is Sheikh Jarrah not apartheid?

Is the nation-state law not apartheid?

And the denial of family reunification?

And the unrecognized villages?

Is there a single sphere, in Israel or the territories, in which there is true, absolute equality, except in name?

To read the report is to despair. It’s everything we knew, but condensed.

Yet no despair or remorse was felt in Israel. Most of the media marginalized and blurred it, and the hasbara choir batted it away. The propaganda minister, Yair Lapid, recited his lines and went on the attack even before the report was published. Diaspora Affairs Minister Nachman Shai was quick to follow.

The international report has yet to be born that Israel won’t denounce while neglecting to respond to a single point it makes. One organization after another, some of them important and honest, call it apartheid, and Israel says: antisemitism.

Please, prove Amnesty wrong. That there aren’t two systems of justice in the territories, two sets of rights and two formulas for the distribution of resources.

That the legitimization of Evyatar is not apartheid.

That Jews being able to reclaim their pre-1948 property while Palestinians are denied the same right is not apartheid.

That a verdant settlement right next to a shepherd’s community with no power or running water is not apartheid.

That the Green Line has not been erased. What’s not true?

Even Mordechai Kremnitzer [an important attorney in Israel] was frightened by the report and attacked it. His arguments: The report does not distinguish the occupied territories from Israel, and it treats the past as if it were the present. That’s how it goes when even leftist academia enlists in defense of Zionist propaganda. Accusing Israel of the sins of 1948 and calling it apartheid is like accusing the United States of apartheid because of the Jim Crow past, he wrote in Wednesday’s Haaretz.

The difference is that institutionalized racism in the United States has gradually disappeared, whereas in Israel it’s alive and kicking as strong as ever. The Green Line has been obliterated too. It’s been one state for a while now.

Why should Amnesty make the distinction? 1948 goes on. The Nakba goes on. A straight line connects Tantura and Jiljilya. In Tantura they massacred, in Jiljilya they caused an 80-year-old man to die, and in both cases Palestinian lives aren’t worth a thing.

There is, of course, no propaganda without accolades for the justice system. “The important contribution of the government’s legal counsel and the courts, which, against a large political majority, prevented the banning of Arab candidates and lists for Knesset … An Arab party joining the coalition immediately puts the accusation of apartheid to ridicule,” wrote Kremnitzer.

[Read about some of the travesties handed down by Israel’s courts here, here, and here.]

It’s so good to wave the High Court of Justice, which has not prevented a single occupation iniquity, and Mansour Abbas [a Palestinian member of the Knesset] to prove there’s no apartheid. Seventy-four years of statehood without a new Arab city, without an Arab university or a train station in an Arab city are all dwarfed by the great whitewasher of the occupation, the High Court of Justice, and a minor Arab coalition partner, and even that one considered illegitimate.

ESSENTIAL READING ON ISRAEL AND APARTHEID: