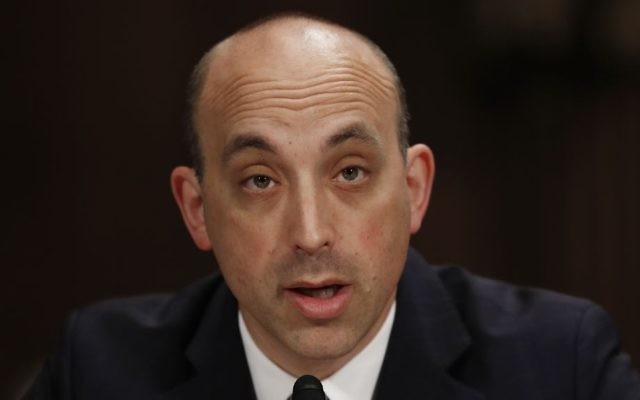 Jonathan Greenblatt, CEO and national director of the Anti-Defamation League, May 2, 2017

Jonathan Greenblatt insists that Israel is innocent of the crime of apartheid, and that the US should not employ supporters of Palestine in public office.

Jonathan Greenblatt, the head of the Anti-Defamation League, is in the position of, once again, protesting a respected human rights organization that has characterized Israel as an apartheid state.

He came out with guns blazing in a testimony before the House Homeland Security Committee last Tuesday.

Greenblatt kicked things off by stating:

If you are unable to disassociate yourself with movements that espouse violence or supremacy of any group, yes you should be barred from government service.

For anyone unsure about his meaning: understand that he is not referring to supporters of the violent, Jewish supremacist state of Israel:

If we talk about Al Qaeda, we talk about ISIS, we talk about some of the horrific anti-Israel people out there who say the Jewish state is committing genocide [this would be a reference to reports by Amnesty International, Human Rights Watch, Israel’s own B’Tselem, and others]…I don’t think they belong…in any public office for that matter. I feel very strongly about that. That kind of extremism should have no place.

To recap: Jason Greenblatt believes that anyone who believes the meticulously documented, fact-based reports by these global organizations – is akin to ISIS itself, and ought not to be allowed to hold any public office (this would evidently include the many Jewish Americans who fully support justice for Palestinians – quarter of Jewish voters polled by the Jewish Electorate Institute said they believed Israel is an apartheid state. This number rises to 38% for voters under 40).

The level of censorship he is suggesting here is immense, absurd. The insinuation that Israel is a nonviolent, non-racist state is preposterous. But Israel’s proponents must live in this fantasy world.

When asked about the report just released by Amnesty International, Greenblatt was ready:

Look, I almost don’t want to dignify it with my time today. The problem is that when you make wild aspersions and groundless accusations against the Jewish state, it has an immediate knock-on effect on the Jewish people…

It is worth noting at this juncture that, while Israel and its partisans (including ADL) repeatedly declare that the apartheid accusations are groundless, not once has anyone proven that a single statement in the reports is untrue. In fact, the particulars of the reports are meticulously left un-addressed – they are unassailable. To continue Greenblatt’s tirade:

I think it’s frightening. I think it’s a terrible report. I think it’s going to cause — I promise you, I predict it, I’ll be back on this committee talking about threats against Jews spawned by this kind of wild accusation.

I think the brilliant disguise of [Amnesty International] showing up as human rights advocates will not work for the majority of good thinking Americans who realize what they’re doing.

To be crystal clear: cyberbullying or any other kind of bullying is wrong and dangerous.

That said, it is undeniably Israel’s actions – not those of the human rights groups – that is putting American Jews in a vulnerable spot. Israel is where change needs to happen.