You Are Here: Home → Rima Najjar: Rebecca Vilkomerson of JVP, can we talk?

Rima Najjar: Rebecca Vilkomerson of JVP, can we talk? 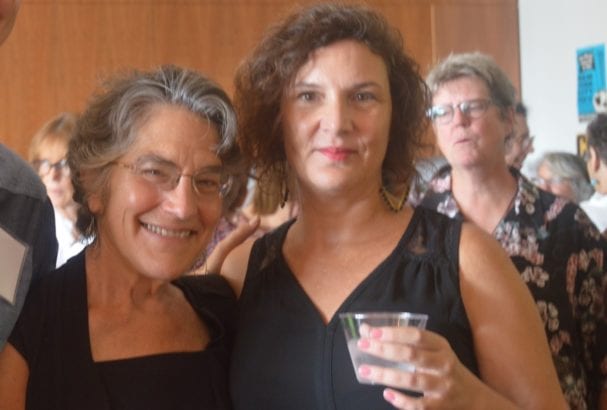 JVP Executive Director Rebecca Vilkomerson (right) with JVP Board Member Phyllis Bennis at a 2019 JVP party honoring Vilkomerson. Bennis is founder and former head of the US Campaign Against the Israeli Occupation, recently renamed “US Campaign for Palestinian Rights”. For many years Bennis obscured the power of the Israel Lobby.

Jewish Voice for Peace says it supports BDS, but for 10 years it had a head whose spouse works for an Israeli company (Check Point Software, which has close ties to the Israeli military).  Najjar writes: I was deeply shocked by the news because, despite everything, I trusted Rebecca and JVP to do the right thing. To me, the matter is one of personal integrity…

When I say I trusted JVP ‘despite everything’, I am referring to the agonizingly long wait we Palestinians have had to endure before JVP officially rejected Zionism, condemned Israel’s Zionist settler-colonial regime and embraced BDS…

By Rima Najjar, reposted from Medium

Jewish Groups, like J Street, are being called “progressive” as in a Newsweek headline in connection with the so-called “Deal of the Century”, when they “Dismiss Trump’s Middle East Peace Plan As ‘Utterly Bankrupt’ and a ‘Sham’”.

The news that Rebecca Vilkomerson, Jewish Voice for Peace (JVP) executive director* and founder, is living with a husband who works for Check Point, an Israeli cybersecurity company that makes monitoring software and should at least be as high as HP on anyone’s boycott list, has hit me hard, coming as it did on the eve of the grand announcement of the plan Trump hatched and is implementing with Israel’s far-right government. Trump’s plan aims to formalize Israel’s apartheid rule over the Palestinian people. It is, according to the Boycott, Divestment and Sanctions (BDS) Movement, “the final nail in the coffin of the moribund ‘peace process’, making #BDS the most effective response”. Trump’s ‘deal of the century’ has been rejected by the UN, which reiterated that the Israeli-Palestinian conflict should be solved based on UN resolutions and international law, and by Palestinian rights activists in the region and abroad.

I was deeply shocked by the news regarding JVP’s executive director and founder, because, despite everything, I trusted Rebecca and JVP to do the right thing. To me, the matter is one of personal integrity. I am not saying she had to divorce her husband. I am saying she had a responsibility, both ethical and professional, to air out the political differences between herself and her husband, if they existed, publicly in a principled manner. But maybe that would have been impossible, given the ambiguous nature historically of JVP’s support for Palestine. Or maybe there was no political tension in the marriage, only hypocrisy.

Rebecca, you have stated publicly that, “The state of Israel is not the same as the Jewish people”, and avowed your and JVP’s anti-Zionism. Why, then, is your husband working in an Israeli company that profits from the incubator provided by the Israeli state’s repression of Palestinians? It’s because so many of JVP’s supporters stand behind Israel as a Jewish state. So I have to ask, as my friend Lena Bloch does:

When I say I trusted JVP “despite everything”, I am referring to the agonizingly long wait we Palestinians have had to endure before JVP officially rejected Zionism, condemned Israel’s Zionist settler-colonial regime and embraced BDS. It is Zionist Jews who have created Zionism and Israel for their purposes (the non-Jewish world has simply adapted to their initiatives), and it has always been my hope and belief that non-Zionist American Jews are best positioned to help get Palestinians out of the nightmare into which Zionism has plunged us since the creation of the Jewish State in 1948.

So can we talk, please Rebecca? Public debate on Israel today is finally opening up issues that go to the heart of Israel’s legitimacy, its Zionist ideology and constitution as a Jewish state and, by extension, issues that are central to Palestine’s liberation. It is my hope that you will now be completely open and honest about such issues that so clearly still have to do with “Jewish identity”. JVP’s site says that they seek “security and self-determination for Israelis.” My point in challenging Rebecca is to make her address, in her public capacity, the question of the Zionist Jewish identity politics that is obstructing liberation in Palestine.

Rima Najjar is a Palestinian whose father’s side of the family comes from the forcibly depopulated village of Lifta on the western outskirts of Jerusalem. She is an activist, researcher and retired professor of English literature, Al-Quds University, occupied West Bank.

Vilkomerson recently stepped down as JVP executive director after heading it for 10 years. The information that her husband worked for an Israeli company run by an IDF Intelligence veteran first became public in 2017 (buried in an article published by Counterpunch), but JVP kept a lid on it and very few activists learned of the situation.

The company, Check Point Software, is named after Israel’s notorious check points. It is reported to have close ties with the Israeli military. The CEO previously worked in the IDF’s Unit 8200 cyber espionage corps. Vilkomerson’s spouse holds a high level position at the company.

Despite Vilkomerson’s conflict of interest with JVP’s announced support for BDS, the JVP board kept Vilkomerson on as executive director for an additional two years. In September 2019 JVP held a goodbye party honoring Vilkomerson. It posted photos of the party on its Facebook page: