You Are Here: Home → I am a proud Palestinian woman and a humanitarian. I am also the mother of the youngest Palestinian prisoner in an Israeli jail

I am a proud Palestinian woman and a humanitarian. I am also the mother of the youngest Palestinian prisoner in an Israeli jail 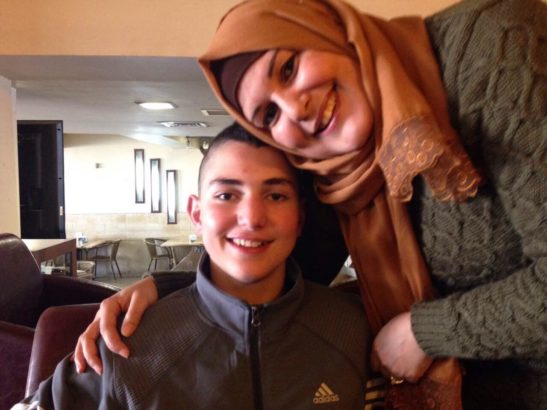 My name is Farihan Daraghmeh Farah. I am a proud Palestinian woman and a humanitarian. I am also the mother of the youngest Palestinian prisoner in an Israeli jail. As I write this piece, on International Women’s Day, these are the things that define me. But as any parent—or any person—can imagine, no detail defines me more so than that final one.

My son, Shadi, is a smart little boy who was always full of life. He is loved by everyone who knows him—family, neighbors, friends and classmates. He is a great Dabke dancer, and a good swimmer and horseback rider. He likes to sing and is excellent at math. My husband and I have always done our best to provide for Shadi and the rest of our children, encouraging them in their education and hobbies, and teaching them to be kind, honest and open in their dealings with others. We raised them to accept people for who they are, regardless of their nationality, religion or race.

Shadi was arrested on December 30, 2015. He was just 12 years old. The news took my breath away; the whole family was in a state of shock. For a long time, none of us could eat or sleep properly. When I closed my eyes, all I could see was my little boy, scared and alone, in a freezing cold prison cell. I later learned that they had forced him to stand in there naked, at one point.

He had been waiting at the bus station in our home city of Jerusalem when Israeli police arrested him and took him to the main police station (al-Muskubiya, or the Russian Compound in Jerusalem). We were only informed of his arrest at 10 p.m. after we had become worried and reported his absence. Shadi had been accused of planning to commit a crime with a knife, despite no knife being found in his possession. During the interrogation they then asked him whether he would have stabbed an Israeli, if he had had a knife. He told them simply that he would never have been able to stab any human being….

…..my now 13-year old boy will spend an additional two years in prison, convicted by the draconian military legal system of a foreign power. For Israeli children, the laws are different. Now all we can do is visit Shadi as often as we can. Technically, we are allowed to see him once a week, but even with saving every penny we have, we can only afford to travel to the prison once every two weeks or sometimes once a month….