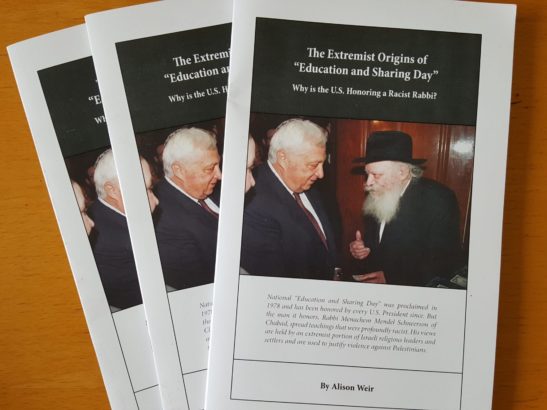 If tradition holds, President Trump will proclaim April 7th national Education and Sharing Day. This is an annual observance that honors the Lubavitcher Rebbe, Rabbi Menachem Mendel Schneerson. The holiday is marked with public gatherings and parades.

This national observance was first proclaimed in 1978 to honor Schneerson’s 80th birthday. Since then, this national commemoration has been proclaimed by every U.S. president.

The problem is that some of Rabbi Schneerson’s teachings were profoundly racist​ and support violence​ against Palestinians; such teachings even train impressionable young Israeli soldiers to commit atrocities.

In the U.S., most people only know about Schneerson’s more benign and even benevolent work. Few, including adherents of Schneerson’s Chabad faith, know about his more extremist and racist teachings, which include statements that “a non-Jewish soul comes from three satanic spheres, while the Jewish soul stems from holiness” and that Jewish and non-Jewish people should be considered “different species.”

But in Israel, a very small but significant group of extremist religious leaders and settlers hold these beliefs, which are used to support violence against Palestinians.

Among the religious settlers in the occupied territories, ​Schneerson’s followers ​constitute one of the most extreme groups. Baruch Goldstein, the mass ​murderer of Palestinians, was one of them.

I wrote an article about this in 2014: “The Extremist Origins of Education and Sharing Day: Why is the US Honoring a Racist Rabbi?“​ in which I reported:​

Israeli military manuals sometimes replicate extremist teachings. For example, a booklet authored by a Chief Chaplain stated, “In war, when our forces storm the enemy, they are allowed and even enjoined by the Halakhah to kill even good civilians…” Such teachings by the IDF rabbinate were prominent during Israel’s 2008-9 attack on Gaza that killed 1,400 Gazans, approximately half of them civilians.

​​Chicago writer Stephen Lendman has described these teachings, giving a number of examples.

As my article shows, the main person to expose this information was Israeli professor, author, and peace activist Israel Shahak. Shahak was praised by Edward Said, Noam Chomsky, and many others. For more details, please see the article.

We are now asking that you do two things:

While many of Schneerson’s other teachings are laudable, his supremacist, racist teachings exemplified above support violence and terrorism against Palestinians. We feel that a national day in which Americans honor the perpetrator of such dangerous teachings is deeply wrong. Please help us expose this and end it.

Below is a video about Schneerson’s relationship with former Israeli Prime Minister Ariel Sharon, nick-named “The Bulldozer” and “The Butcher of Beirut.” Sharon was an Israeli military leader known for his operations against men, women, and children.

Alison Weir is executive director of If Americans Knew, president of the Council for the National Interest, and author of Against Our Better Judgment, The Hidden History of How the U.S. Was Used to Create Israel.

Update: The following comments were sent to us by Rabbi David Mivasair. With his permission, we are sharing them with readers:

I am so glad to see you taking on the grotesquely deceptive (and so far successful) campaign to disguise the Lubavitcher Rebbe as a humanist and universalist. His teachings are deeply racist and demeaning to the very core.

I say this as a rabbi who for decades read and studied his teachings deeply. While much of what he wrote and talked about contains beautiful and expansive teachings about religious life, much of it also is savagely contrary to any humane, positive view of all people who are not Jews.

I have for years wished that someone, somewhere would oppose the cynical and self-serving attempts by Chabad to brand their organization in the garb of government approval and expose the deeply racist core of much of their teachings. I appreciate you taking this on and hope you will have some success with it.

[Read more on the article page.]