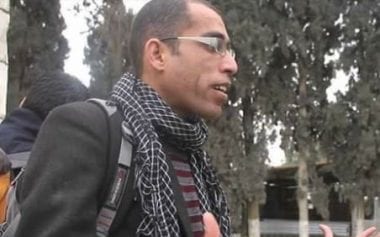 March 6, 2017: Bassel al-A’raj, 31, was killed by Israeli soldiers in al-Biereh town in the central West Bank district of Ramallah after the soldiers surrounded a home and exchanged fire with him for more than two hours. Locals said the Palestinian ran out of ammunition before the soldiers stormed the property, killed him, and dragged him from his feet for a distance, leaving a blood trail. They then took his corpse to an unknown destination. The invasion led to clashes between the soldiers and many local youngsters, who hurled stones on the military vehicles, while the army fired live rounds, rubber-coated steel bullets and gas bombs. Two Palestinians were wounded. Bassel was from al-Walaja, in the West Bank city of Bethlehem. Source: IMEMC

See a list of all Palestinians and Israelis killed, with photos and details, at If Americans Knew’s Israel-Palestine Timeline.

We are working to get every death posted here and to social media. This project aims to create a record of the human cost of the Palestine-Israel tragedy. The aim of the Timeline is as follows:

This website records each person killed, and aims to remind us all that every single death is the end of a life, devastating and terrifying to parents, children, siblings, friends, neighbors, witnesses and even entire communities. A neighbor or friend murdered is a loss that doesn’t go away.

Please help us by sharing the Timeline widely.