You Are Here: Home → Protesters come from around the world to support Palestinian-led rally against AIPAC 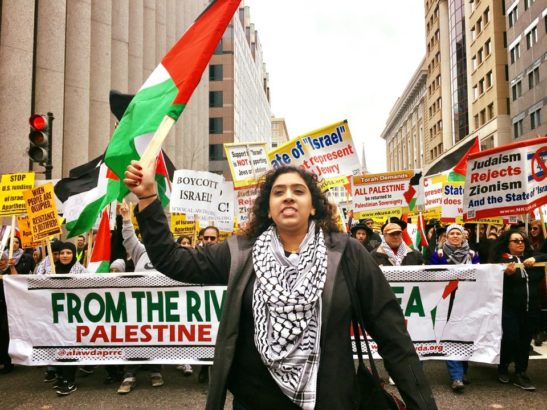 The Sunday, March 26, demonstration was organized by chapters of the Palestinian Right of Return Coalition, Al-Awda (The Return), and International Answer, a national antiwar organization.

It began with speeches in front of the White House by prominent human human rights workers Iyad Burnat, leader of the Bil’in nonviolence movement in the West Bank whose brother made the Oscar nominated “Five Broken Cameras;” Greta Berlin, co-founder of the boats to Gaza movement; author Alison Weir, founder of If Americans Knew and president of the Council for the National Interest; Mahdi Bray, Director of American Muslim Alliance; Miko Peled, son of a famous Israeli general from one of Israel’s founding families; Brian Becker, ANSWER leader and longtime  human rights activist; Eugene Puryear, Washington D.C. activist and author; and other activists for justice. The gathering drew committed and powerful activists, including author Dr. Cornel West.

All emphasized they were there to support Palestinian rights and to oppose the American Israel Political Affairs Committee (AIPAC), which is holding its national convention in Washington D.C. Numerous politicians from both parties traditionally attend the convention, hopeful that they will receive AIPAC assistance in their next campaigns, or at least escape its dangerous disapproval.

AIPAC is one of the most powerful organizations in Washington D.C. and requires politicians to be pro-Israel, even when this damages U.S. interests.

Israel was founded in 1948 through a war in which most of the indigenous population, which was composed of Muslims, some Christians and a small Jewish minority, were expelled from their land to make way for the self-proclaimed Jewish State. In 1967 Israel launched another war in which it occupied the rest of Palestine, the West Bank and Gaza, confiscated still more land, and expelled hundreds of thousands more Palestinians.

Today, largely through the efforts of AIPAC and allied organizations, Israel gets over $10 million per day. This is provided to Israel despite a long record of human rights violations, as well as violations of both international law and U.S. laws.

After the speeches, demonstrators marched to the AIPAC convention, where the protest continued. The rally marks the second year that Al-Awda activists and the Answer Coalition joined together to organize a Support Palestine, Protest AIPAC rally held at the doors of the annual AIPAC convention in Washington D.C.

Al-Awda families had spent months promoting and preparing for the rally, distributing flyers and making signs and banners.

Two other groups also demonstrated against AIPAC. One of them was Medea Benjamin’s Code Pink, which has organized several previous anti-AIPAC protests.

The other was a new group called “If Not Now,” a Jewish organization that has recently arrived on the scene to oppose the Israeli occupation of the West Bank and Gaza, while supporting Israel.

Some of INN’s young members made powerful statements about overcoming early pro-Israel conditioning, and about their outrage at discovering information about what Israel is doing to Palestinians in the West Bank and Gaza. However, while welcoming the new group, some members of the Palestinian-led protest expressed concern that INN was shifting the discourse away from Palestinian activists and priorities, a worry lent credence by several media reports that covered INN but left out the Palestinian-led protest entirely.

One demonstrator said: “These kids are wonderful; their statements really moved me. However, I worry that the organization is here to grab the limelight and try to co-opt the movement for justice.” Some marchers noted that INN doesn’t seem to include Palestinians’ right of return, discuss the 1948 ethnic cleansing, the discrimination within Israel itself, or support BDS.

Some criticized the fact that the timing of the new group’s protest at the Convention Center conflicted with the Palestinian organized White House rally, speeches, and march, even though these had been announced ahead of time.

INN was featured in a report on Huffington Post, “Protesters Take On Settlements In ‘Biggest Ever Jewish-Led Protest’ Of AIPAC,” which left out any mention of the others who had protested AIPAC alongside INN. It was also the main focus of a Common Dreams report, which mentioned that Code Pink had also protested but did not mention the Palestinian-led component, the White House demonstration, the fact that Palestinians had organized the march, the diverse nature of the event, and the presence of numerous Muslim Americans despite many attacks on this community.

While AIPAC attendees were extremely angered at the protest, one young student leader who had been brought by AIPAC to D.C. came out to speak to those assembled to learn their perspective. He turned out to be a strong supporter of human rights and justice and was committed to learning the facts. He’s pictured at right, speaking with Alison Weir.

Below are videos of the protest and of the cultural event afterward.