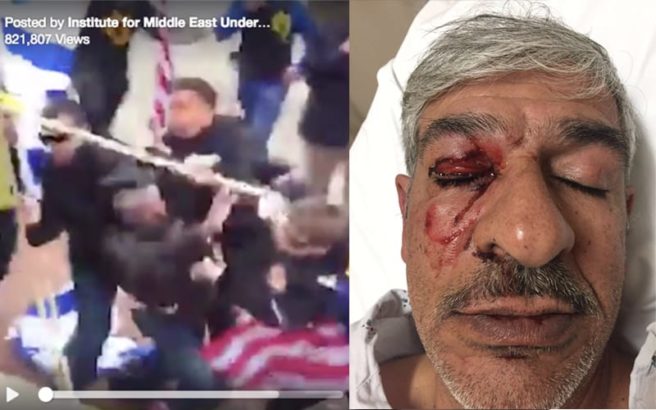 A video of the assault posted by the Institute for Middle East Understanding (IMEU) on Facebook and Twitter shows a mob of JDL members pushing Mr. Nayfeh to the ground while others kick, punch, and hit him with flag poles. (The video is posted at the end of this article.)

The attackers were not immediately detained by police even though several witnesses attested to what happened. Mr. Nayfeh’s daughter had to implore the police to make an arrest, and the attackers are not being charged with hate crimes.

One of the men arrested is the founder of a group called American Bikers United Against Jihad and is also the administrator of a website called “Islam Exposed.”

While some Jewish and Israeli media covered the incident, mainstream American media have paid it no attention.

The Jewish Defense League has a history of plotting and executing  acts of violence against Arabs.

The group was founded in 1968 by Meir Kahane, a far-right Brooklyn-based rabbi who advocated for the expulsion of all Palestinians from the West Bank and Gaza. The group has been classified as a “right-wing terrorist group” by the Federal Bureau of Investigations.

The Jewish Forward reports that the JDL is now “seeking to re-establish itself in the United States after decades of inactivity.” At the anti-AIPAC demonstrations, people wearing the JDL logo were heard shouting “kapos” and “Donald Trump” at protesters.

The group was almost certainly responsible for the murder of Palestinian American anti-discrimination organizer Alex Odeh, who was killed in Santa Ana, CA in 1985 after a pipe bomb exploded in his office.

The JDL chairman at the time, Irv Rubin, publicly stated, “I have no tears for Mr. Odeh. He got exactly what he deserved.”

In 2001, Rubin and JDL West Coast coordinator Earl Kruger were arrested for plotting to blow up Lebanese-American congressman Darrell Issa’s office as well as a Culver City mosque. Rubin killed himself before the trial took place, but Kruger was sentenced to 20 years in prison.

Investigators obtained four names in connection to Odeh’s murder from Kruger; however, the FBI has never followed up with a full investigation.