You Are Here: Home → New book describes how Zionist terrorism created the modern state of Israel 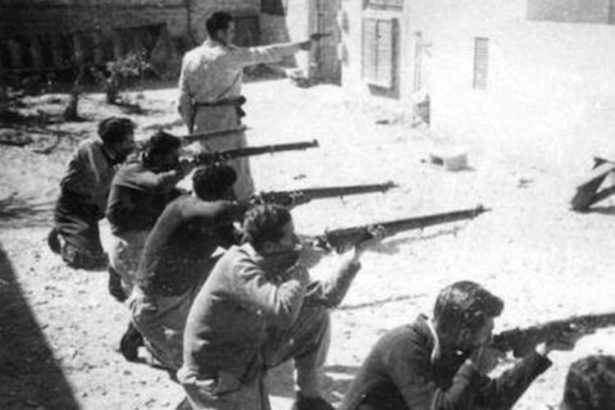 Rod Such at the Electronic Intifada reviews a new book by Thomas Suarez titled State of Terror: How Terrorism Created Modern Israel:

State of Terror asserts that most acts of terrorism were directed at Palestinian Arab civilians. Both the Labor and Revisionist wings of Zionism engaged in terrorism and often colluded with each other in carrying out terrorist attacks, which escalated following the end of the Second World War, culminating famously in the King David Hotel attack in July 1946 that killed 41 Palestinian Arabs, 28 Brits, 17 Jews, 2 Armenians, 1 Russian and 1 Egyptian….

The numerous acts of terrorism against Palestinian civilians during the Nakba of 1947-1949, such as the massacre at Deir Yassin, figure prominently in Suárez’s concluding chapters.

With the creation of Israel in 1948 paramilitary terrorism transformed itself into official state terrorism.

Suárez calls out the Orwellian newsspeak that statehood seemingly confers on acts of terrorism by contrasting the reaction of world opinion to Deir Yassin in April 1948 with the bloodier mass murder that occurred in the village of al-Dawayima in October 1948 after Israel had declared statehood.

That massacre, estimated at 145 people by the village mukhtar (chief), was regarded largely “as a military operation” at the time, according to Suárez, although recent scholarship has more accurately described it as an example of state terrorism.

Suárez devotes considerable attention to Zionist efforts to thwart Holocaust survivors from immigrating to countries other than Palestine and the kidnapping of young Jewish survivors from foster homes in Europe and their transfer to Palestine. In this, he relies heavily on Yosef Grodzinsky’s groundbreaking In the Shadow of the Holocaust: The Struggle Between Jews and Zionists in the Aftermath of World War II (2004).

Suárez also recounts the false-flag terrorism in Egypt designed to win US support for Israel. Famous at the time, but largely forgotten since, Israel’s Unit 131 carried out terrorist bombings against civilian targets in Alexandria and Cairo, mainly cinemas frequented by US and British citizens, in what a Central Intelligence Agency bulletin, declassified in 2005, described as a bungled false-flag operation.

He also includes the shameful blaming of Holocaust survivors by Israeli and Zionist officials for acts of collective punishment carried out in secret by Israeli military forces, such as the massacre in the West Bank village of Qibya in 1953, led by Unit 101 under the command of Ariel Sharon.

State of Terror is a comprehensive guide to Zionist and Israeli state terrorism and one that sheds valuable light on today’s situation.