You Are Here: Home → Israeli sniper shot photographer Tom Hurndall in the head 17 years ago 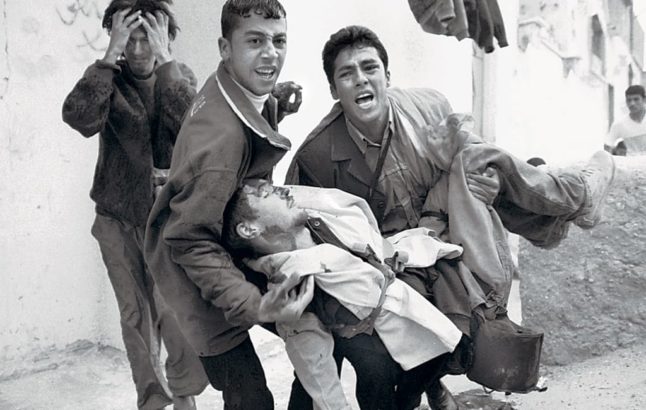 Seventeen years ago this month, Tom Hurndall, 22, was shot in the head by an Israeli sniper as he tried to rescue small girls from Israeli gunfire.

Tom was a student and photographer who traveled to Gaza in 2003. On April 11, he watched as children playing nearby suddenly came under Israeli rifle fire.

Most of the children fled, but three of them, aged four to seven, froze with fear. Tom rushed one to safety. When he returned for two little girls, an Israeli sniper shot him in the head.

Despite the urgency, Israeli officials delayed his transport to specialized medical care for over two and a half hours. Tom remained in a vegetative state until his death 9 months later.

How you can help

Commemorate Tom and inform your community about his story by ordering Tom Hurndall cards to distribute.

We cannot let his courage and compassion be forgotten – or the facts he was working to expose through his photography. The text on the back of the card educates readers about the current situation in Israel-Palestine.

We also encourage you to view and share this powerful documentary filmed in Gaza that covers the shooting of Tom Hurndall, the killing of filmmaker James Miller, and the events that took place after Rachel Corrie was crushed to death by an Israeli bulldozer.

Tom Hurndall’s obituary in The Guardian