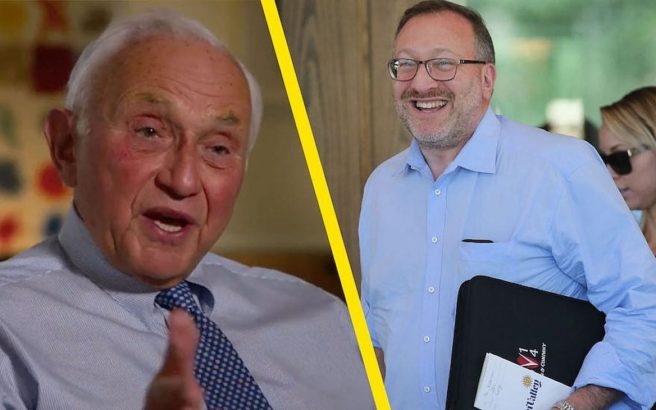 Israel is at the heart of Klarman’s giving, but NYT reporter Bari Weiss hid this – she’s also an Israel advocate and doesn’t want to advertise the power of the Israel lobby & the clout of pro-Israel Jews… Billionaire Les Wexner also quit Republicans over worry that Trump’s actions will ultimately hurt Israel…

Bari Weiss had a big scoop in the New York Times: billionaire investor Seth Klarman is so worried about Trump he’s given up on his traditional favorite, the Republican Party. “Mr. Klarman is now giving almost exclusively to Democrats — and donating far more money than he ever has,” Weiss reports, then quotes him: “We need to turn the House and Senate as a check on Donald Trump and his runaway presidency.”

Trump’s character flaws and “ignorance of history and flawed judgment” are dangerous, Klarman says. “[D]emocratic norms… are being eroded… [Trump] demonizes immigrants and suggests that Muslims, Hispanics and blacks are second-class citizens.”

That’s not the whole story. Israel is never mentioned in the article, but Israel is clearly at the heart of Klarman’s giving. Klarman started a newspaper in Israel, the Times of Israel, and has given to a host of neoconservative Israel lobby organizations, including Trump’s favorite thinktank, the Foundation for Defense of Democracies, the Israel Project, Middle East Forum, WINEP and the David Project, which tried to block construction of mosques in Klarman’s city, Boston.

Klarman is plainly ideological. He also funds CAMERA, a rightwing media outfit that puts out regular critiques of the New York Times. Klarman gave more than $1.5 million to CAMERA through that foundation that works to “protect journalists.”

Haaretz is frank about the Israel angle:

Shalom Lipner, an Israeli political operative now with Brookings, says the Israel angle may be determinative:

The subtext here is that both Wexner and Klarman have stellar records of support for transformative Israeli and Jewish communal initiatives. That they would break with the GOP over Trump speaks volumes about how they perceive his impact on both Israel and the Jewish community.

What Lipner is saying is that Trump is threatening the pro-Israel consensus in American politics by so politicizing Israel support. This is something that many smart pro-Israel political leaders have emphasized. Chuck Schumer told AIPAC, don’t let Israel become a partisan issue. “If Israel becomes the domain of one party or another, Israel will lose.” Neocon Adam Milstein says so from the right, and Jeremy Ben-Ami of J Street says it from the left:

[I]n Netanyahu’s fervent embrace of the Trump administration, he is “sacrificing” historical broad bipartisan American support for Israel to throw in his lot with Republicans, whose share of the voting population is trending downward.

“It is absolutely not in the state of Israel’s interest for Israel itself to become a partisan political football,” Ben-Ami said.

In Haaretz today, Chemi Shalev warns that Israel will go the way of South Africa on the world stage if it continues to alienate a Democratic Party “depleted of its pro-Israeli stalwarts, increasingly beholden to its liberal, left-wing flank.”

The principle of U.S. bipartisan support, long considered a lynchpin and vital component of Israel’s national security, has fallen prey to an ever-rising tide of self-centered arrogance, imperiousness, resentfulness and total lack of self-awareness.

I’m sure Klarman cares a lot about immigrants. But he also cares deeply about Israel, and you’d have to wonder if this is his game– don’t let Israel become a rightwing issue in US politics. Bari Weiss won’t even broach the Israel angle, beyond giving the code word, “hawkish.” Why not?

Because it’s her agenda too. She comes out of pro-Israel activism, starting in college. (Her father is a regular at AIPAC, saluted from the stage this year.) Weiss doesn’t bring up Israel because she’s protective, she doesn’t want to advertise the power of the Israel lobby, doesn’t want to give readers any understanding of how much clout pro-Israel Jews have. The New Yorker did the same thing in its profile of Paul Singer, all but left Israel out. Not wanting to foster anti-Semitic theories about Jewish power is no excuse to lie to readers.

Thanks to Annie Robbins.

Another pro-Israel billionaire, Les Wexner of Ohio, has also taken a similar stand.

The Times of Israel reports: “Through the Wexner Foundation, Wexner has long supported a series of programs meant to develop pro-Israel leadership among teens, adults, volunteers and Jewish communal professionals. He is also a founding funder of Birthright, the program that pays for Israel tours for young Jews, and a major giver to Ohio’s Jewish federations.

The paper reports that Shalom Lipner, a former adviser to Netanyahu who is now with the Brookings Institution’s Center for Middle East Policy, tweeted: “‘The subtext here is that both Wexner and Klarman have stellar records of support for transformative Israeli and Jewish communal initiatives. That they would break with the GOP over Trump speaks volumes about how they perceive his impact on both Israel and the Jewish community.”