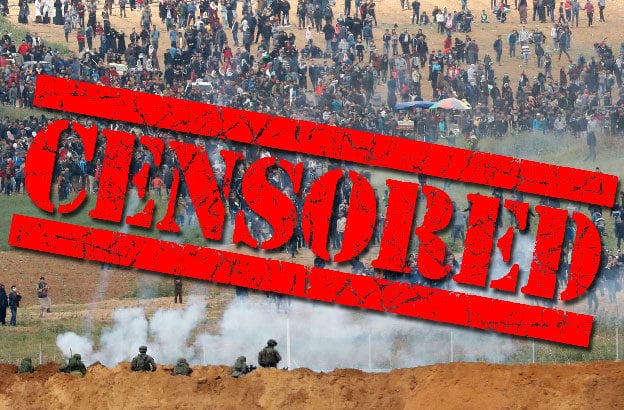 The Gaza Great March of Return, one of the topics the rejected panel planned to discuss, including media analyses such as Kathryn Shihadah’s AP’s slanted report on Gaza Return March, corrected and annotated

The Left Forum board of directors has rejected a panel on Palestine by If Americans Knew. The panel, which was to include a discussion of censorship among its topics, was to consist of a Muslim Palestinian refugee immigrant, two American women, and a Palestinian-Colombian-American man. (Left Forum contact info below)

New York’s Left Forum conference, known as the largest leftist conference in the U.S., has rejected the If Americans Knew panel on Palestine without explanation.

This is particularly ironic, since the Left Forum description for this year’s event states: “We do not need a rigid consensus in order to build together. Unity allows for differences and embraces other voices—it does not squelch them. We do not have to block dissent and critical self-analysis.”

The decision to reject the If Americans Knew panel is also surprising given that IAK founder Alison Weir participated in a Left Forum panel last year that drew a standing-room only crowd and enthusiastic reception. (Video here.)

The censorship is also especially ironic in that the topic of the IAK panel was the censorship of those who criticize Israeli oppression of Palestinians.

The panel was to be entitled: “Is Talking about Gaza anti-Semitic hate speech, or a vital step toward ending oppression?” and was to consist of a Muslim Palestinian refugee immigrant, two American women, and a Palestinian-Colombian-American man.

Below is the proposal, written and submitted by If Americans Knew staff writer Kathryn Shihadah, who was to be one of the panelists:

Is Talking about Gaza anti-Semitic hate speech, or a vital step toward ending oppression?

According to Israel, the US State Department, the Anti-Defamation League, and the South Carolina legislature – the first of what will likely be many states – the subject of Gaza is indeed hate speech.

The panel, organized by If Americans Knew, consists of a Gaza-born Palestinian Muslim, a Palestinian-Colombian-American filmmaker/activist from Chicago, an American blogger/activist from Rockford, Illinois, and an author who travelled throughout Gaza during the Second Intifada.

The panel will include firsthand descriptions of the current situation in Gaza – including the Great March of Return – and the background of the conflict, film clips about how Israel works to censor and control the internet, and a discussion of current and upcoming legislation – both in the US and worldwide – that would effectively shut down dialogue and leave Palestinians at the mercy of Israel’s program of ethnic cleansing.

Quote from each panelist

“The right of return is holy to Palestinians, and is the key to any just peace. Our roots give us rights to our ancestors’ land.”

“The Zionist movement understands the power of cinema and story. We, as Palestinians, must take back and control the narrative.”

“At $10 million a day in military aid to Israel, America is complicit in the violence and injustice. Americans must end it.”

“Americans, in general, have been so steeped in pro-Israel propaganda that we don’t even know there’s another side to the story.” 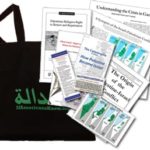 If Americans Knew has been working to inform Americans on Palestine for nearly 18 years, ever since its founder travelled to Gaza and the West Bank at the height of the second intifada as a freelance reporter.

In addition to its main website, it has a news blog that has been covering current events including the Gaza Return March in detail, a timeline of all Palestinians and Israelis killed since 2000 including numerous videos, a YouTube channel on this issue, and a diverse array of booklets, fact sheets, cards, and other handouts that have been distributed to thousands of peace activists around the country.

One of IAK’s videos by filmmaker Samir Salem, who was to be on the If Americans Knew panel. Samir’s films focusing on diverse social issues have won multiple awards and have been distributed around the world. He is the founder of Cinemonger, a motion picture company defined by the blue-collar attitude Samir was raised with. Its mission is to produce inspirational motion pictures to bring about social change.

While the ADL and some other influential groups oppose If Americans Knew (the ADL lists IAK among the top ten “anti-Israel” groups – i.e. those working for Palestinian human rights – and Alison among the top five such individuals), over 2,000 principled and committed peace activists signed a petition in support of If Americans Knew, and another 1,759 signed a similar petition of support.

Alison’s book has received rave reviews and sold over 30,000 copies, and she has received awards from diverse groups, including the American Arab Anti-discrimination Committee, the Council on American Islamic Relations, and a group at Illinois College, which cited her as a “Courageous journalist-lecturer on behalf of human rights. The first woman to receive an honorary membership in Phi Alpha history.”

Censorship of other panels

Left Forum also rejected another panel with Alison that was organized by a different group. The panel was also to include peace activist Ray McGovern (recently violently expelled from Congressional hearings on Gina Haspel), Professor Mark Crispin Miller, and author Gerry Docherty. Ironically, the subject of the censored panel was: “Propaganda, Fake News, Fake History, and Outright Censorship.”

In an effort to overcome the Left Forum censorship of that panel and other rejected panels, the group that organized them will be broadcasting them online June 8-10. (Weir’s will be on June 8th, 8-10:30 pm EST.)

That group has also posted a description of Left Forum actions on their website:

“Early in the submission process, the Left Forum co-directors shared with us a letter sent to them by a Zionist researcher who specializes in documenting hate groups. He claimed that several of our speakers were antisemitic, and made vague threats that they should not be allowed to speak. We vigorously denounced the false, slanderous allegations, although all for naught. The Board—with zero explanation—rejected three of our five panels one month before the conference was due to start. [Full statement here]

Among the information the IAK panel would have shared at the Forum are facts from the article International campaign is criminalizing: criticism of Israel as ‘antisemitism’, coverage of the Great Return March in Gaza, Landmark bill restricting criticism of Israel sneaks through South Carolina Senate and clips from diverse videos, including from this one:

Apparently Graetsch isn’t aware that JVP’s alleged commitment to BDS is somewhat questionable; the spouse of the JVP head works for an Israeli company called “Check Point Security,” named after the notorious Israeli checkpoints at which so many Palestinians have been humiliated, injured, and sometimes killed. The company was founded by an IDF intelligence Unit 8200 veteran ((Unit 8200 operates a massive global spy network), and reportedly has close ties to the Israeli military.

Left Forum Board of Directors & Staff

Anyone who opposes censorship and supports Palestinian rights may wish to contact the Left Forum board of directors and staff members about their decision to exclude If Americans Knew from the upcoming conference.