You Are Here: Home → Congressional bill would apply Israel-centric definition of antisemitism to campuses 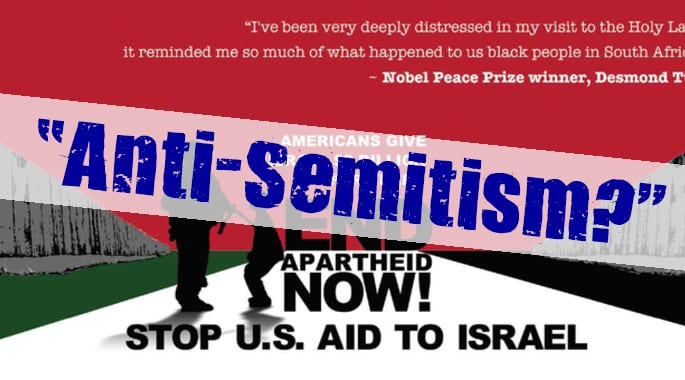 A group of US lawmakers from both houses of Congress introduced legislation on Wednesday to apply an Israel-centric definition of anti-Semitism to the American educational system. If passed, this would likely be used to to censor information on Israel-Palestine on U.S. campuses.

The basic formulation on which the definition is based was originally created by an Israeli official in 2004. Versions have since been inserted into various entities both internationally and in the U.S., where a definition created in Europe in 2005 was adopted by an Israel partisan in the State Department in 2010. This definition is now called “the State Department definition” of antisemitism. It is this version that the current law would apply to U.S. campuses. (For more information see this.)

The current legislation – H.R. 5924 (previously, H.R.6421) & S.2940  – is entitled “A bill to provide for the consideration of a definition of anti-Semitism for the enforcement of Federal antidiscrimination laws concerning education programs or activities. (Text here) The short title is ‘‘Anti-Semitism Awareness Act of 2018.’’

A similar bill, “Anti-Semitism Act of 2016,” was supported by the American Israel Public Affairs Committee (AIPAC), the Anti-Defamation League (ADL), the Jewish Federations of North America, and the Simon Wiesenthal Center but was not enacted.

Legal experts have warned that such bills would violate the First Amendment. Palestine Legal points out:

The redefinition of antisemitism is so broadly drawn—and its examples so vague—that any speech critical of Israel or supportive of Palestinian rights could conceivably fall within it. For example, a human rights supporter who speaks out for Palestinian rights, citing reports by such bodies as the United Nations or Amnesty International regarding Israeli human rights abuses, could be labeled antisemitic for applying a double standard by requiring of Israel behavior not expected or demanded of others.

If U.S. government entities adopt and apply this overbroad re-definition of antisemitism to censor political viewpoints critical of Israel, they would likely violate the First Amendment.

The American Civil Liberties Union (ACLU) stated that the 2016 bill posed “a serious threat to the First Amendment free speech rights of those on campus who may hold certain political views.”

The ACLU stated: “The First Amendment prevents the federal government from using its great weight to impose severe penalties on a person simply for sharing a political viewpoint critical of Israel.”

In some cases legislators may not be fully aware of what the bill contains and how it can be used. A press release from Eastern Washington Congresswoman Cathy McMorris Rodgers fails to inform the public that the definition is a nontraditional one that when applied to campuses will likely restrict certain factual statements about a foreign country.

FAQ: What to Know About Efforts to Re-define Antisemitism to Silence Criticism of Israel