You Are Here: Home → Jacobin: Israel Is an Extremist Enterprise 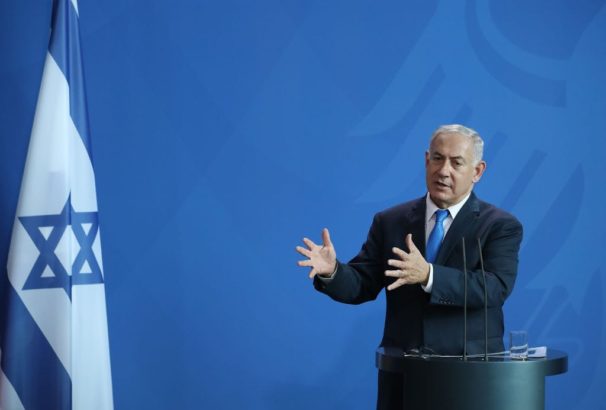 Benjamin Netanyahu’s pact with a far-right, anti-Arab party ahead of April’s elections is repugnant. But it’s in keeping with a state that has racism and exclusion baked into its foundation.

by Belen Fernandez, reposted from Jacobin
In preparation for April elections, Israeli prime minister and right-wing icon Benjamin Netanyahu has sought to increase his chances of forming a majority government by finagling a merger of extremist party Otzma Yehudit — Jewish Power — with Jewish Home, another far-right party whose ideology is more palatable to mainstream opinion.

Otzma Yehudit subscribes to the worldview of Meir Kahane, the New York-born rabbi — assassinated in 1990 — whose movement was banned from Israeli politics in the 1980s and classified as a terrorist group in the United States. Among the many charming ideas inherited from Kahane are that the occupied Palestinian territories should be annexed to Israel and Palestinians should be expelled.

The New York Times notes that Netanyahu has “enraged Jewish leaders in Israel and the United States by striking a bargain with a racist anti-Arab party whose ideology was likened by one influential rabbi to Nazism.” And it’s not just the usual liberal Zionists wringing their hands at the perceived sullying of Israel’s image.

AIPAC — pillar of the Israel lobby in the United States — retweeted a condemnation of Otzma Yehudit by the American Jewish Committee, seconding the conviction that the party is “racist and reprehensible.” (This didn’t stop AIPAC from tweeting the very next day that it was “honored to announce” Netanyahu’s impending attendance as a speaker at its 2019 policy conference.) Jonathan Greenblatt, CEO of the Zionist Anti-Defamation League (ADL), also took to Twitter to lament that the Otzma Yehudit leaders and their “hate-filled rhetoric” were “being legitimized” by the Jewish Home-Jewish Power union: “There should be no room for racism & no accommodation for intolerance in Israel or any democracy.”But while the ostensibly antiracist uproar no doubt comes off as noble, the fact is that Israel is fundamentally a racist and anti-Arab state that has carried out an uninterrupted flow of reprehensible behavior.

Where, pray tell, are all of the concerned curators of Brand Israel when the country opts to undertake one of its regular bouts of slaughter in the Gaza Strip? Where are the paeans to tolerance and democracy when Israeli Arabs are deemed second-class citizens and non-Israeli ones are treated as either terrorists or collateral damage?

Over at Bloomberg, neocon Eli Lake moans that Jewish Power “embraces [Kahane’s] policy of ethnic cleansing” and that “one of its leaders holds a party every year at the grave of the Jewish terrorist Baruch Goldstein, who murdered 29 Palestinian civilians in 1994.” But as Israeli historian Ilan Pappé demonstrates in The Ethnic Cleansing of Palestine, that particular “policy” is Israel’s MO. And while the Goldstein massacre certainly qualifies as terrorism, it would seem that plenty of other episodes in recent Israeli history do, too — like the 2014 Israeli military murder of 2,251 Palestinians in Gaza, including 229 women and 551 children.

[In the following campaign ad for Benny Gantz, Israeli army chief of staff and serious contender for Prime MInister, touts his accomplishments during Operation Protective Edge, in which 2,251 Palestinians and 73 Israelis were killed.]

This bloodbath and others, incidentally, were presided over by none other than Israeli army chief of staff Benny Gantz, Netanyahu’s main challenger in the upcoming elections, whom Netanyahu has taken the liberty of decrying as “left-wing.” Suffice it to say that with Gantz on the left and Otzma Yehudit on the right, there’s lots of room for barbarity on the present political spectrum — but not much else.

And yet this is the same Menachem Begin whose previous Herut party was — shortly after Israel’s establishment in 1948 — condemned in a letter published in the very same Times and signed by Albert Einstein, Hannah Arendt, and other prominent Jews. The letter denounced the party as “closely akin in its organization, methods, political philosophy and social appeal to the Nazi and Fascist parties.”

Speaking of fascism, an NBC News article on Netanyahu’s “embrace of far-right extremists” quotes Yossi Mekelberg, a professor at Regent’s University in London and an associate fellow at Chatham House: “The Kahanists are a bunch of fascists.”

Again, however, it seems the F-word could be more liberally applied in a country that last year passed a law formally establishing Israel as the “nation-state of the Jewish people” and downgrading Arabic from an official language to one with “special status.” It also bears mentioning that Jewish Home — the new ally of Jewish Power — until recently boasted such leaders as Israeli Justice Minister Ayelet Shaked, who in 2014 called for the genocide of Palestinians, and Education Minister Naftali Bennett, known for such feats as an ethics code banning university professors from expressing political opinions or supporting the BDS movement.

A few months ago, Shaked and Bennett broke off to form the New Right party — since Israel can apparently never have enough varieties of right-wing zealotry.

Now, the reaction to Netanyahu’s Jewish Home–Jewish Power machinations recalls the commotion elicited by the nation-state law, when conscientious Zionists warned of Israel’s dangerous diversion from its ordinarily oh-so-moral path. But the reality remains that — with or without Otzma Yehudit — Israel is itself an extremist enterprise.

Belén Fernández is the author of The Imperial Messenger: Thomas Friedman at Work and Marytrs Never Die: Travels through South Lebanon. She is a contributing editor at Jacobin.