You Are Here: Home → Israel sets Gaza up for superbug epidemic 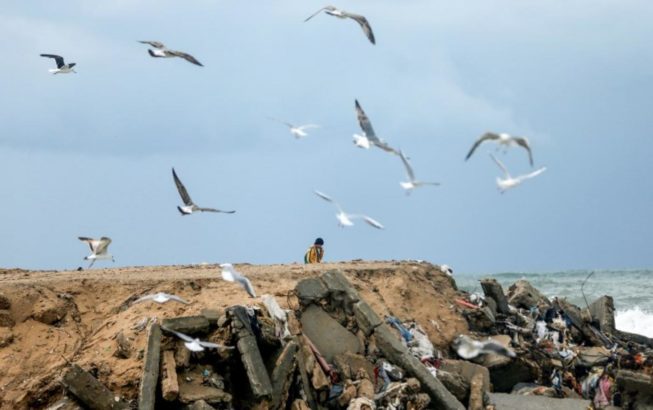 A recent report exposes the serious threat of a superbug epidemic in Gaza, due to Israeli-blockade shortages of sanitation supplies in hospitals, targeting of medical personnel and facilities, and water shortage and contamination. The epidemic would certainly spread beyond Gaza.

Given the regular atrocities to which the Gaza Strip is subjected by a very visible enemy – the state of Israel – the last thing that’s needed is an unseen one, to boot.

In the past five years alone, Israel’s activities vis-a-vis the Palestinian territory have included a 50-day assault in 2014 that killed some 2,251 Palestinians – most of them civilians, and more than 550 of them children – along with repeated attacks on peaceful Palestinian protesters in the context of the Great March of Return, which saw more than 60 Palestinians killed on a single day last May.

According to a December report from the UN Office for the Coordination of Humanitarian Affairs, more than 25,000 people in Gaza were injured by Israeli forces in 2018.

And as it turns out, Gaza’s visible enemy is primarily to thank for the emergence of the invisible one: the superbug – defined in the Oxford dictionary as a “strain of bacteria that has become resistant to antibiotic drugs”.

The Bureau of Investigative Journalism notes that Gaza is a “particularly fertile breeding ground for superbugs because its health system has been crippled by years of blockade and antibiotics are in short supply… Shortages of water, power and fuel for generators mean doctors often cannot meet even basic hygiene standards.”

Citing medical professionals, the report goes on to specify that “staff sometimes can’t even wash their hands… and there are shortages of gloves, gowns and chlorine tablets for sanitising the hospitals”. Indeed, the Israeli blockade, imposed in 2007, has brought Gaza’s healthcare system to the brink of collapse.

B’Tselem, the Israeli Information Centre for Human Rights in the Occupied Territories, details some of the numerous impediments to healthcare in the besieged coastal enclave, such as Israeli restrictions that “apply to replacing broken equipment, importing advanced medical equipment and drugs, [and] travel by physicians for professional training outside Gaza”.

Add to the mix the aforementioned severe power shortage – a result of machinations by Israel and the complicit Palestinian Authority in the West Bank, complicating treatment for thousands of patients in Gaza – and the Israeli-induced health crisis in the Gaza Strip starts to seem like a form of warfare in itself.

Ghassan Abu-Sitta, head of plastic surgery and founder of the conflict medicine programme at the American University of Beirut Medical Center, explained in a recent email to MEE what antimicrobial resistance (AMR) in Gaza means in light of last year’s protest casualties: “AMR infection is a major obstacle to reconstructive surgery as infected wounds cannot be reconstructed.”

To highlight the immensity of the problem, Abu-Sitta noted that 80 percent of the “6,500 gunshot injuries in six months” of 2018 affected victims’ lower limbs. Without reconstructive surgery, he stressed, “these injuries will become disabilities”.

(See end of article for one patient’s story.)

In other words, the situation is nothing less than horrifying.

But while Palestinians have long suffered a disproportionate share of the world’s injustices, the superbug epidemic will hardly remain confined to Gaza; after all, unlike Palestinians, bacteria know no borders.

Abu-Sitta, who travelled to Gaza in May on one of many trips to treat the victims of Israeli brutality, is also quoted in the bureau’s report on how research from Scotland shows that “multi-drug resistant bacteria can be found in the pellets of migrating birds. The idea anyone could be immune… is absurd.”

Additionally, the “untreated sewage from Gaza containing multi-drug resistant bacteria goes into the aquifer”. Were the Israeli government interested in self-reflection, it might conclude that usurping other people’s water resources while simultaneously crushing their capacity for wastewater treatment is probably not the most prudent course of action, from a national or global security perspective. Ditto, for comprehensively oppressing an entire population and creating the conditions for a superbug epidemic in the first place.

Call it bacterial blowback, if you will.

Indeed, though Israel thrives on portraying Palestinians as the Number 1 existential threat, it’s safe to surmise that antibiotics-resistant bacteria may be a slightly more pressing matter on the existential plane.

The bureau also quotes Dina Nasser, lead infection control nurse at Augusta Victoria hospital in East Jerusalem, who reiterates that the crisis in Gaza is of global concern: “Multi-drug resistant organisms don’t know any boundaries. That’s why the global community, even if it’s not interested in the politics of Gaza, should be interested in this.”

But at the end of the day, the issue is of course political – and the superbug epidemic should help to expose the Zionist enterprise as positively sick.

Belen Fernandez is the author of  The Imperial Messenger: Thomas Friedman at Work, published by Verso. She is a contributing editor at Jacobin magazine.

(a sample case from the Guardian)

31 operations after being shot in the leg

One of the Gazans dealing with the double impact of injury and superbug infection is Fahed Zuhud, 29. He was throwing stones near the border in February when a bullet shattered his leg. He was rushed to hospital for surgery, but his wound became infected and he developed osteomyelitis, a serious infection inside the bone which can often lead to amputation.

So far Zuhud has endured 31 operations to reconstruct his leg and try to clear the wound of infection. He can no longer work, and faces years more of treatment. Doctors have not been able to identify the strain but believe it is multi-drug-resistant because he has had every antibiotic available, to no effect…

He is waiting for a bone implant, but the infection has stalled his treatment. If his infection had been treatable with antibiotics, he might be able to walk by now, says Dr Ahmed Abu Warda, a doctor at the clinic.

Instead, 10 months later, Zuhud is still on crutches and there is concern that the infection could still spread. “Maybe he will lose all the femur bone,” Warda said. “Amputation is still a possibility.”