You Are Here: Home → Do Members of Congress Take Too Many Subsidized Trips to Israel? 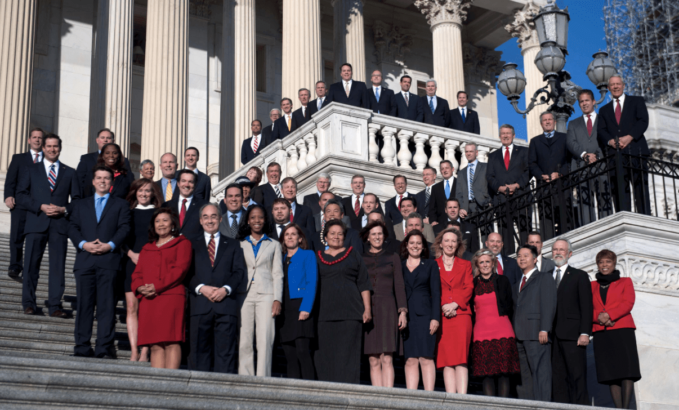 In 2015, all but three freshmen in the US House Representatives took a free trip to Israel, compliments of the American Israel Education Foundation (AIEF), the educational wing of hardline right-wing pro-Israel lobbying organization the American Israel Public Affairs Committee (AIPAC).

Among Congress members’ subsidized trips abroad, Israel is by far the top foreign destination; most trips are curated to cultivate an Israel-centric perspective of the region, and are paid for by an organization with deep foreign ties. On the other hand, only a handful of legislators visit Palestine. 41% of Americans believe that if their representatives visit Israel, they should also visit Palestine.

Congress tried to outlaw such lobbying trips, but a change to the law called “the AIPAC loophole,” was inserted…

by Grant Smith, reposted from antiwar.comPosted on

One of every three members of Congress boarding a jetliner on a privately-funded all-expense paid trip overseas has Israel as their final destination. Only one out of a hundred ever visits Palestinian territories as a final destination.

The vast majority of Israel trips are funded by the American Israel Education Foundation which raises tax-exempt contributions from pro-Israel donors and Jewish federations. They typically last eight days and cost $10,000. AEIF is a corporation created in 1988 by the domestically-registered lobbying group AIPAC, the American Israel Public Affairs Committee. In 2009 66% of AEIF’s board was comprised of AIPAC directors. Since AIEF is merely a lobbying funding conduit with no employees, whenever members of Congress travel to Israel, they are accompanied instead by staffers from AIPAC. In 2017 AIEF reported raising $60 million in revenue and expending $57 million.

Another sole-purpose entity set up by AIPAC in 1984 is the Washington Institute for Near East Policy which works to portray policies favored by the Israeli government as being in the American interest.

[Editor’s note: The trips to Israel used to be organized by AIPAC itself until Congress enacted legislation in 2007 intended to stop lobbying organizations from taking government officials on fully paid tours. However, the legislation contains a loophole (some call it the “AIPAC loophole“) that allows nonprofit groups to organize such trips, and AIEF officially took over the tours.]

AIPAC differs from many other groups funding private trips because of its foundational foreign ties. AIPAC lobbying began in earnest in the 1950s by a former employee of the Israeli Ministry of Foreign Affairs – Isaiah Kenen – who received ongoing payments from Israel to set up public relations and lobbying in the US. Kenen was paid by the Israeli government to receive congressional delegations in Israel after major aid packages were passed into law.

Late in 1962, the umbrella organization in which AIPAC served as the lobby division was ordered by the Justice Department to register as an Israeli foreign agent. Six weeks later AIPAC incorporated and filed for tax-exempt status as a religious charity. These historic facts never appear in mainstream reports about AIPAC.

A typical AIEF itinerary consists of numerous briefings by Israeli government officials, trips to historical sites, and lavish restaurant visits and hotel stays. Absent from the itineraries are any briefings on Israel’s nuclear weapons triad or meaningful visits to Palestinian refugees. This leaves members of Congress with a highly distorted view of one of the world’s longest-running and most contentious issues, and inflated views of Israel’s military vulnerability.

Disproportionate numbers of trips to Israel are one major reason Congress has given the country over $250 billion since 1948, more than was given Europe to rebuild under the Marshall Plan.

Members reported privately sponsored visits to the Palestinian territories in only two of the past five years. In 2015, 30 members of Congress traveled under sponsorship of the American Global Institute; Palestinian Initiative for the Promotion of Global Dialogue and Democracy. In 2016 10 members traveled under the same sponsor.

Question: Should members of the US Congress taking educational trips to Israel also visit the territories where Palestinians expelled during Israel’s creation live?

Though not as statistically relevant as the overall poll results, demographic filtering reveals younger and older adults are generally more supportive of Palestinian territory visits. In the 18-24 category, 45.7% favored such visits while in the 25-34 age group 46% were supportive of Congress members visiting Palestine. 55-64 year-olds and the 65+ category also had higher favorability to the idea.

Demographic filter by age: Should Members of the US Congress taking educational trips to Israel also visit the territories where Palestinians expelled during Israel’s creation live?

If private groups provided fact-finding trips to Palestinian territories at a rate commensurate with quantifiable public interest, members would have taken 567 such visits between 2014-2018. Whether meaningful numbers would be courageous enough to go on such trips – officially or privately funded – is an open question.

But such trips would likely shatter decades of Israel lobby myth-making and assiduous opinion molding among US elected officials. This was the fear of Texas Republican representative Brian Babin who argued such an official visit to the West Bank could “undo years of goodwill built by the foreign policy and Israeli-American communities.”

IRmep poll methodology and information about RMSE as a sampling error benchmark. Raw data and demographic filters are available from Google.

Grant F. Smith is the director of the Institute for Research: Middle Eastern Policy in Washington and the author of the 2016 book, Big Israel: How Israel’s Lobby moves America which is now available as an audiobook. IRmep is co-sponsor of the annual The Israel Lobby & American Policy Conference at the National Press Club, which takes place two days before the AIPAC policy conference.