You Are Here: Home → Israel’s escalating attacks on Gaza may be prelude to ‘wide-scale’ offensive 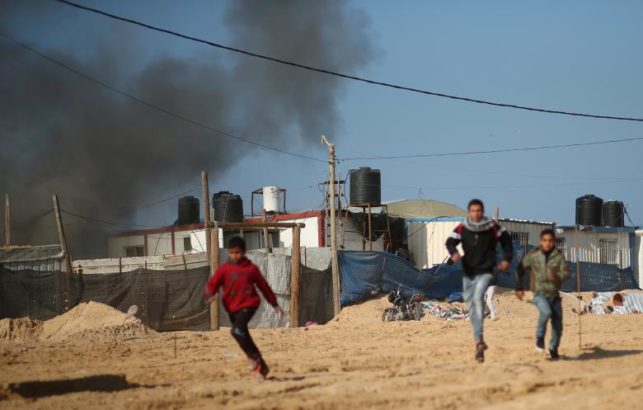 Al Mezan Center for Human rights, Feb 7, reports on intensified Israeli attacks on Gaza and calls on the international community to stop a possible new invasion:

“Acting before a full-scale military bombardment is launched is crucial to ensuring the protection of Palestinian civilians in the Gaza Strip.”

Yesterday’s escalation is reminiscent of the preludes to Israel’s wide-scale aggressions on Gaza, the last of which—so-called Operation Protective Edge—was conducted in July and August of 2014…

According to available information, the IOF launched a number of attacks on North Gaza on Monday, 6 February 2017, starting at 9 AM, while the Israeli Navy fired at Palestinian fishing boats off the coast of Beit Lahia. Soon afterwards, at 9:45, the IOF fired two artillery shells at a Palestinian observation post for a resistance faction to the north of Beit Lahia. Later, at 13:45, Israeli war planes struck, with one missile, a resistance faction’s training site located near the coast of Beit Lahia. This was followed, at 13:50, with a similar airstrike on another training site near Al Nawras Resort on the beach of Beit Lahia, which lead to the injury to two fishermen.

The airstrikes continued in North Gaza, and at 13:55 a third training site to the east of Jabalia camp was targeted. Ten minutes later, Israeli soldiers stationed at the “Memorial” outpost opened fired at Palestinian shepherds near the separation fence in northern Beit Hanoun.

In Middle Gaza, at 15:30, Israeli artillery shells landed in the vicinity of the local landfill, east of Deir Al Balah. No casualties were reported. Later, at 16:00, the IOF stationed at the border with Israel to the east of Maghazi camp shelled an observation post of a Palestinian resistance group. In addition, the IOF stationed at the border east of Deir Al Balah used machine guns to fire eastward, causing damage to a civilian home belonging to Ahmed Abu Moghisib.

In the Gaza City district, at 18:45, Israeli warplanes launched one missile at two poultry farms in the east of Al Shujai’ya resulting in complete destruction of one farm and damage to the other. At approximately 19:20, Israeli artillery targeted, with two shells, a Palestinian resistance training site located at Jabal Al Rayis, east of the Tuffah neighborhood in eastern Gaza City. Another eight artillery shells fell in vacant lots to the east of Zaitoun and Shujai’ya.

Al Mezan condemns the military escalation and views such attacks as possible preludes to a wide-scale aggression on Gaza. As witnessed in the last three Israeli military campaigns, women, children and the elderly bear the brunt of Israel’s lack of respect to the rules of international law, including targeting of the civilian population and civilian properties.

Al Mezan calls on the international community, particularly the High Contracting Parties to the Fourth Geneva Convention, to act promptly against Israel’s military escalation, to fulfill their obligations to protect civilians, and ensure respect for the rules of international law. Acting before a full-scale military bombardment is launched is crucial to ensuring the protection of Palestinian civilians in the Gaza Strip.

Al Mezan reaffirms that the failure of the international community to mobilize international accountability measures subsequent to past and ongoing violations of international law serves to encourage Israeli military and government leaders to continue to perpetrate war crimes and to evade obligations incumbent upon them under International Humanitarian Law. 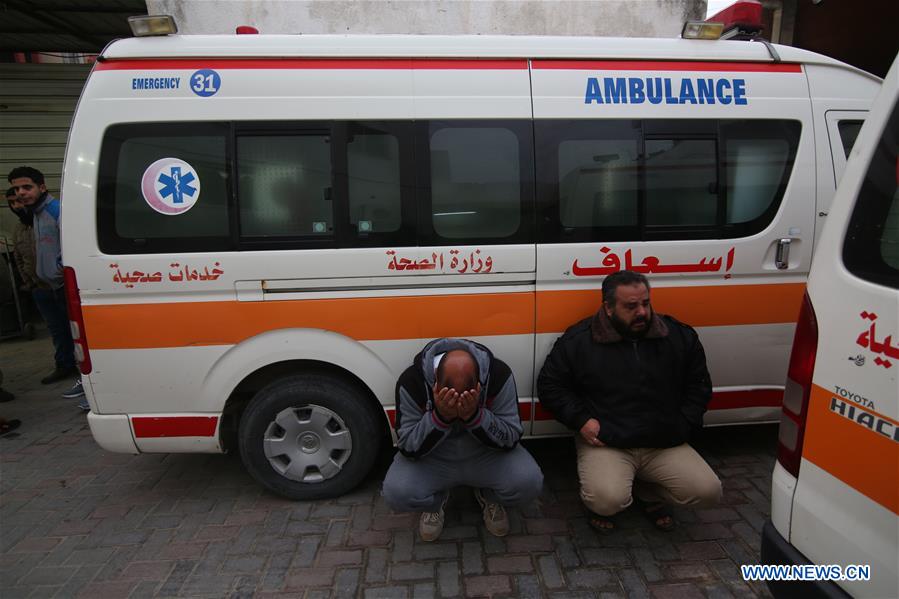 PHOTO: Relatives of a victim mourn at a hospital in the southern Gaza Strip city of Rafah, on Feb. 9, 2017. Two Palestinians were killed and five others were wounded Thursday in a predawn Israeli air strike on the border between the Gaza Strip and Egypt, reports and witnesses said. (Xinhua/Khaled Omar)

RAFAH, Gaza Strip, Feb. 9 (Xinhua) — Two Palestinians were killed and five others were wounded Thursday in a predawn Israeli air strike on the border between the Gaza Strip and Egypt, reports and witnesses said.

The Health Ministry in Gaza said in an e-mailed press statement that Israeli F-16 fighter jets struck with air-to-ground missiles an underground smuggling tunnel on the border.

Husam al-Sofi, a resident of Rafah in southern Gaza and Mohamed el-Aqra’a, 38, were killed in the air strike, the statement said, adding that the five injured had been sent to local hospital.

Eyewitnesses in Rafah said that Israeli air fighters struck a tunnel with two missiles in the border area between Rafah and Egypt.

Israeli media quoted army officials as saying that the air strike was a retaliation against the rockets attacks launched from Sinai into the Israeli port city of Eilat.

Two days ago, Israeli fighter jets launched about 17 successive air strikes on Gaza military posts and facilities belonging to the military wing of Hamas and other groups.

According to Reuters: “Hamas has observed a de-facto ceasefire with Israel since a 2014 war but small armed cells of Jihadist Salafis have defied the agreement and have continued to occasionally launch rockets at Israel. When those attacks occur, Hamas usually orders its fighters to vacate potential targets for Israeli retaliation.”