You Are Here: Home → Israel abducted 590 Palestinians in January – 7,000 now in Israeli prisons 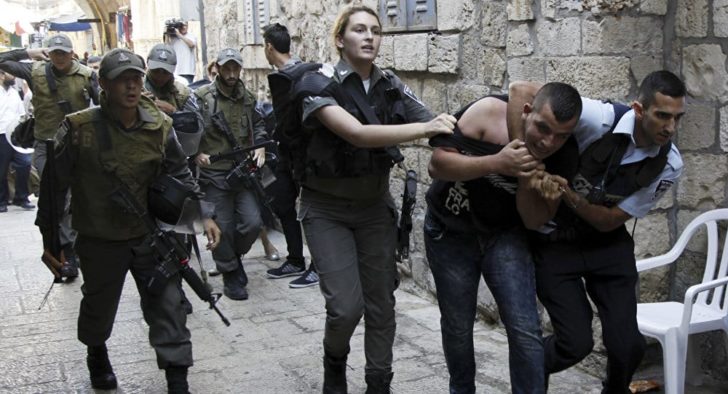 Addameer reports that in January Israel “arrested”  an estimated 590 Palestinians, including 128 Palestinian children, 14 women, a journalist, and a Palestinian parliament member.

These “arrests” are different than what most Americans understand the term to mean. Those doing the “arresting” are not the society’s police force enforcing the population’s laws. The “arrests” are perpetrated by Israeli military forces occupying Palestinian land.

Addameer reports that  there were 91 administrative detention orders. These imprison Palestinians without charge or trial. They are issued for six month periods, and are often extended for years.

According to the report, “The total number of Palestinian prisoners in Israeli jails is around 7,000, including 52 women, of whom 11 are minor girls. There are 300 child prisoners, approximately 530 administrative detainees and 21 journalists in Israeli jails.”

The report stated: “The policy of medical negligence continued against hundreds of patients, alongside the ongoing use of administrative detention (imprisonment without charge or trial), solitary confinement and isolation, the imprisonment of children and women prisoners, and the imposition of heavy financial fines against the prisoners. Hundreds were also deprived of family visits.”

The report urged the UN and international community “to take action to stop grave violations against Palestinian detainees, especially the continued practice of torture and cruel and degrading treatment. This also includes the continuing violation of the human rights of the child, through arbitrary arrests against children or during interrogation and detention procedures, and urged action to compel occupation authorities to recognize their obligations to respect the rights of detainees against torture and ill-treatment.”