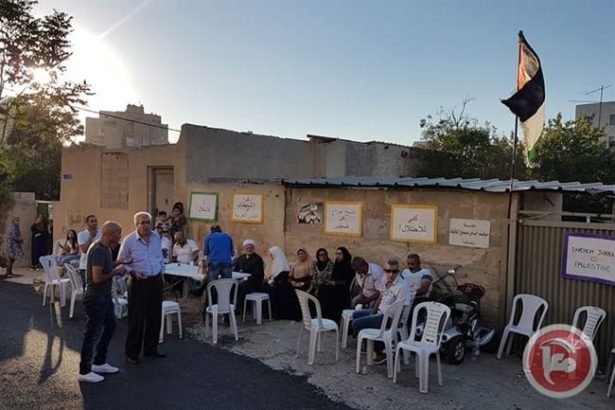 The Shamasna family, which has lived in their home in East Jerusalem for 53 years, was forcibly evicted Tuesday by Israeli police, who then allowed three armed Jewish Israeli teenagers to take over the home.

The eviction came just two weeks after an Israeli judge had ruled that the eviction should not be carried out, after challenges were presented by the family’s lawyer on the lack of documentation of the plots of lands in the neighborhood on the municipal level.

According to members of the Shamasna family, Israeli police officers along with special units and intelligence officers entered the neighborhood with armored vehicles and trucks early Tuesday. The heavily armed police and officers woke the family and forced them out of their home, then loaded their belongings onto trucks.

In addition, the police closed all access to the street, preventing their friends and family from coming to their assistance. Those evicted include 84-year old Ayyub and his 75-year old wife, both of whom suffer from numerous health problems. They were forced out onto the hot street, where they stood in the sun as 3 Israeli teenagers entered their family home and took it over, laughing and pointing their weapons at the elderly couple.

Some of the younger Shamasna family members tried to stage a sit-in to prevent the eviction of their home, but they were dragged out onto the street by the Israeli police.

The eviction of the family was based on an Israeli law which allows Jewish Israelis to take control of property believed to have been owned by Jews prior to Israel’s creation in 1948. But the Shamasna family took the case to court, saying their family had lived there for generations, and there was no indication of pre-1948 ownership by Jews.

There is no reciprocal law for the hundred of thousands of Palestinians to reclaim land that was lost to them when they were forced from their homes in 1948 when Israel was created on Palestinian land.

According to the family, “After the Nakba (1948), we paid rent to the Jordanian government’s Custodian of Enemy Property, and after the occupation of the West Bank in 1967, the property moved to the Custodian General of the Israeli occupation authorities, who then coerced all residents to sign a renewable yearly lease. Then in 2009, they refused to renew the lease claiming that there were Jewish heirs. The alleged heirs filed legal procedures at Israeli courts asking to evacuate us, and since that time we have been fighting legal battles in courts to try and keep our house. A final decision to evacuate the house was made in 2016.”