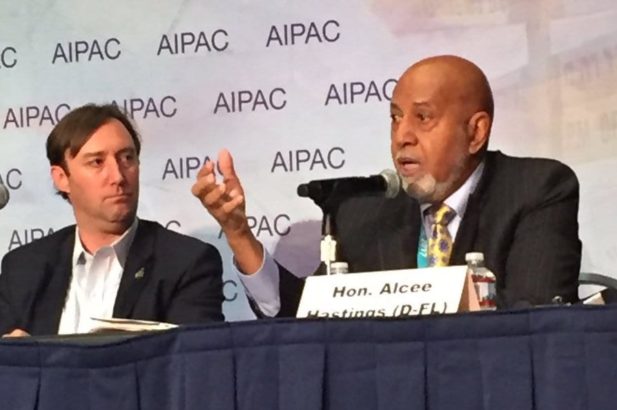 Democratic Congressman Alcee Hastings, who represents some of Florida’s most poverty-stricken communities, proposes sending an additional $12 million to Israel on top of the over $10 million per day it already receives. He has visited Israel 18 times.

WASHINGTON – A U.S. Congressman from Florida has proposed a legislative amendment that would devote $12 million to support Israel’s Ethiopian community. The amendment was proposed on Tuesday by Rep. Alcee Hastings, a Democratic lawmaker and a member of the House Rules Committee, as part of budget discussions for 2017-2018.

Editor’s note: This would be on top of the over $10 million per day that Israel already receives – about 7,000 times more than others around the world.]

Hastings represents Florida’s 20th Congressional District, located in southeast Florida, which includes, according to Wikipedia, “most of the majority-black precincts in and around Fort Lauderdale and West Palm Beach. It also includes a vast area inland to the southeastern shores of Lake Okeechobee, including the community of Belle Glade.”

Belle Glade is one of the country’s most poverty stricken communities, 43 percent of the residents living in poverty. A report a few years ago found that nearly 60 Percent Of Florida public school children were living in poverty. Hurricane Irma is currently threatening the area.

Hastings explained when presenting this amendment that “of the 141,200 Ethiopians living in Israel today, two-thirds were born in Ethiopia. In many cases, the transitions to modern Israeli society were a culture shock requiring acclimation to new customs and language. The adjustment has led to a number of major challenges, including enduring shortfalls in education.”

Hastings neglects to mention systemic Israeli racism against them (see below*).

He also fails to mention the indigenous Palestinians who are being pushed out, Israel’s discrimination against them, and their high poverty rates.

Hastings added that in light of this situation, “the Israeli Ministry of Education recently completed a long-term review to determine how to best meet the needs of the community. The plan that was presented and adopted included approximately $20 million for programs to improve integration of the Ethiopian community into Israeli society, focusing principally on education, and more specifically, language and math skills.”

According to Hastings, Israeli organizations that work with the Ethiopian sector “do not have sufficient resources to meet the needs of these communities,” even after the recent addition of Israeli government funding. This was cause for his proposed amendment, adding that “supporting this type of programming would be a logical and effective way to continue improving upon our country’s bilateral relationship, and would build upon programs that are already implemented on the ground.”

Hastings, a member of the Congressional Black Caucus, has been active on the issue of  Israel’s Ethiopian community for a number of years now. In March of this year, he sent a letter, signed by 12 other members of Congress, encouraging the heads of the House Appropriations Committee to devote money to support programs assisting the Ethiopian community in Israel. Hastings has visited Israel 18 times during his career [presumably on all-expense-paid trips], and has spoken at the annual conferences of the pro-Israeli lobby group AIPAC.

*Israel has long discriminated against Ethiopians. There were riots some years ago when it was discovered that Israeli blood banks were throwing out the blood Ethiopian-Israelis had donated.

And just yesterday an Israeli blood bank refused to use blood donated by an Ethiopian member of the Israeli parliament. The Knesset Member said: “I think it is absurd and unacceptable that in the year 2013, in the State of Israel, members of the Ethiopian community, who arrived here 25 years ago, can’t give blood.”

(The Washington Post reports that in 1989 “Hastings was convicted by the Senate of engaging in a ‘corrupt conspiracy’ to extort a $150,000 bribe.”)