You Are Here: Home → Israeli fifth column in Virginia funnels resources to Israel 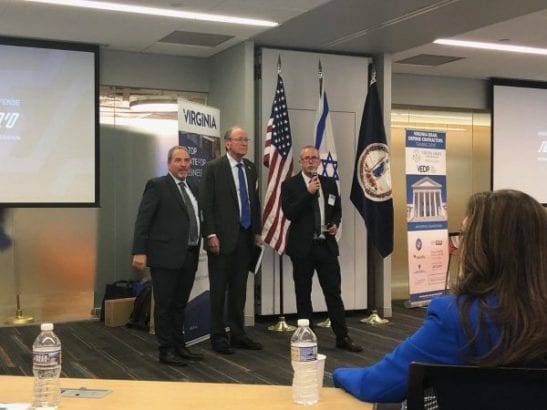 The Virginia Israel Advisory Board is little more than a mechanism set up to carry out licensed robbery of Virginia state resources being run by a cabal of local Jewish Americans and Israelis to benefit their co-religionists in Israel.

The VIAB is unique because it is actually part of the Virginia state government. It is funded by the Commonwealth of Virginia and is able to access funds from other government agencies to support Israeli businesses. It is staffed by Israelis and Jewish Americans drawn from what has been described as the “Israel advocacy ecosystem”

Many of the Israeli companies are located on land stolen from Palestinians in the West Bank. They are illegal under international law…

Politicians, bureaucrats and media talking heads have long turned a blind eye to legislation and policies that benefit the state of Israel to the detriments of United States’ interests. The U.S. Treasury is plausibly describable as a gift that never stops giving to the people and governments of Jewish state.

Since the foundation of Israel in 1948, the federal government in Washington has provided some $142.3 billion in direct aid of various kinds. Currently, Israel receives $3.8 billion per annum guaranteed for ten years, a sum that is supplemented by various giveaways, tax concessions and co-production arrangements from the government. Private “charitable” donations from individuals, businesses and foundations, some of which are fraudulent, considerably augment those numbers, making the total that Israel receives annually from the United States well in excess of $10 billion.

A considerable proportion of that money is technically illegal, as it goes in support of the Israeli settlements on Arab land. No other country has received anything even approaching what Israel gets from the American taxpayer in one form or another and the one-way flow of money is also remarkable in that it has been guaranteed well into the future.

Other benefits obtained by Israel from the United States are less easy to quantify, to include the theft of U.S. military technology, which is then copied and sold by the Israeli arms industry, directly eliminating American jobs in one of the few manufacturing sectors that is relatively speaking thriving. There is also the observable transfer of high-tech jobs from the U.S. to Israel, engineered by Jewish billionaires like Paul Singer who are able to influence such decisions in the corporate world.

Israel low-ball bids to US companies

Israel also benefits enormously from the United States-Israel Free Trade Agreement of 1985, which is, by design, intended to give the Jewish state free access to the huge U.S. market without any real reciprocity for U.S. companies to enter the tiny Israeli market. Israel also is able to bid on U.S. government contracts, including classified defense contracts, a practice that has led to several lawsuits when the Israeli company gets a contract by lowballing the bid but then fails to perform.

In some cases, Israeli companies have submitted low bids to obtain contracts at state and federal levels even when they had no relevant experience and no facilities that can actually perform the work. They pocket the subsidies and advance payments they receive from local governments and states and then effectively disappear.

The desire of some American Jews who occupy powerful positions to aid Israel at the expense of the United States is despicable, sustained by the lie that Israel is an ally and that both countries ultimately benefit from the process. Israel’s ability to impose its own priorities at the levels of Congress and the White House has long been observed, but its political manipulation and ability to corrupt U.S. democracy on behalf of a foreign power have lately been extended to the state and local levels.

This shift is due in part to the desire on the part of Israel’s promoters to shut down the growing Boycott, Divestment and Sanctions (BDS) movement. It has proven difficult to pass an unconstitutional national level ban on non-violent criticism of Israel going through Congress, so the Israel firsters have instead concentrated on the states. Twenty-eight states now have some form of legislation that denies state services or jobs to anyone who does not sign an agreement to not boycott Israel. A particularly draconian bill being considered in Florida equates any criticism of Israel with anti-Semitism, enabling any critic to be sued in courts for hate speech.

A particularly egregious and also unique example of a state’s economic policies being manipulated by a dedicated Israeli fifth column in government is the Virginia Israel Advisory Board. Grant Smith, long a critic of the VIAB, heads the Institute for Research: Middle Eastern Policy (IRMEP). He has written a new book entitled The Israel Lobby Enters State Government: Rise of the Virginia Israel Advisory Board, which documents in considerable detail how the conspiracy by powerful Jews in Virginia to benefit Israel has actually operated, much of it secretly through special arrangements and deals. He has also had a long interview with Scott Horton of Antiwar.com regarding the book which is well worth listening to.

The VIAB is unique because it is actually part of the Virginia state government. It is funded by the Commonwealth of Virginia and is able to access funds from other government agencies to support Israeli businesses. It is staffed by Israelis and American Jews drawn from what has been described as the “Israel advocacy ecosystem” and is self-administered, appointing its own members and officers.

While there are many Israel business promotion entities active in the United States, only Virginia has such a group actually sitting within the government itself, ready to make secret preferential agreements, to arrange special concessions on taxes and to establish start-up subsidies for Israeli businesses. Israeli business projects have been, as a result, regularly funded using Virginia state resources with little accountability. Bear in mind that this agency exists not to promote Virginia businesses but rather to give an advantage to Israeli businesses, some of which might even be competing with existing Virginia companies and putting local people out of work.

Virginia already runs an estimated $500 million trade deficit with Israel due to the federal Free Trade Agreement and the promotion of Israeli businesses in the state, which repatriate their profits to Israel, adds considerably to that sum. Smith reports how VIAB is not just an economic mechanism. Its charter states that it was “created to foster closer economic integration between the United States and Israel while supporting the Israeli government’s policy agenda.” Smith also has observed that “VIAB is a pilot for how Israel can quietly obtain taxpayer funding and official status for networked entities that advance Israel from within key state governments.”

Jewish federations and groups active on behalf of Israel were present in Virginia before VIAB was founded in 1996. Its Godfather was Eric Cantor, a state legislator who later entered Congress as the only Jewish Republican, where he was a powerful advocate for Israel. The board grew significantly under governor Terry McAuliffe’s administration (2014-2018).

McAuliffe, regarded by many as the Clintons’ “bag man,” received what were regarded as generous out-of-state campaign contributors from actively pro-Israeli billionaires Haim Saban and J.B. Pritzker, who were both affiliated with the Democratic Party. McAuliffe met regularly in off-the-record “no press allowed” sessions with Israel advocacy groups and spoke about “the Virginia Advisory Board and its successes.” That was, of course, a self-serving lie by one of the slimiest of the Clinton unindicted criminals.

And wherever Israel goes there is inevitably going to be the usual hanky-panky. Many of the Israeli companies chowing down on the Virginia feed bag are located on land stolen from Arabs on the West Bank. They are illegal under international law, even if President Donald Trump and company have declared otherwise.

And then there are the conflicts of interest. VIAB board member Aviva Frye, whose family mostly resides in Israel and who worked to obtain the government approvals for an Israeli solar and wind energy company called Energix, located on the West Bank, was subsequently rewarded with a company directorship. And one hand inevitably washes the other. Board member Eileen Filler-Corn, a leading advocate for Israel, recently became the first woman to become speaker of the Virginia House of Delegates. Grant Smith reports how she benefited greatly in her campaign by virtue of large donations from other board members as well as from Jewish groups and Israeli companies.

The VIAB is little more than a mechanism set up to carry out licensed robbery of Virginia state resources being run by a cabal of local American Jews and Israelis to benefit their co-religionists in Israel. Grant Smith observes how some pushback is finally in evidence, due to fraud in accounting procedures that have been exposed as well as environmental devastation for various projects that were never completed. Some human rights groups have also begun to challenge the illegality of the Israeli West Bank settlement-based companies involved.

But it is not enough and it is probably too late as Israel is never held accountable for anything by the American Establishment. For my part, as a Virginia resident I have written and called the governor’s office and the offices of my state Senator and Delegate. No one has returned my calls or responded to my letters. Whose America is it? one might well ask.

Philip M. Giraldi, PhD is a former CIA analyst and military intelligence officer who served nineteen years overseas. Giraldi is currently executive director of the Council for the National Interest.