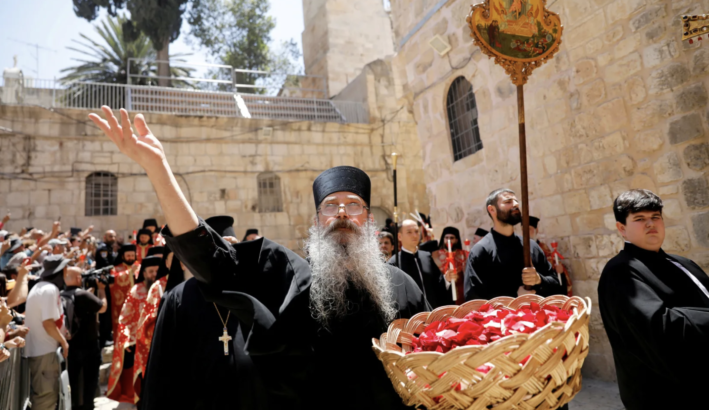 A member of the Greek Orthodox clergy during a procession on Easter Sunday at the Church of the Holy Sepulchre in Jerusalem’s Old City, April 28, 2019. Credit: REUTERS/Ronen Zvulun

Church property in the Christian Quarter of Jerusalem’s Old City may end up in the hands of a radical settler group that could bar Christian access to their holy sites.

by Nir Hasson, reposted from Ha’aretz

The leaders of a number of Christian denominations in Jerusalem issued an unusual joint statement in which they criticized the Supreme Court’s decision on Monday to uphold the sale of three properties by the Greek Orthodox Patriarchate to an organization that seeks to increase Jewish presence in Jerusalem’s Old City.

The church leaders warned that if Ateret Cohanim control the sites, Christians in the capital will lose access to the Church of the Holy Sepulchre.

They called on Prime Minister Benjamin Netanyahu, President Reuven Rivlin and the Israeli government to intervene and act to preserve the status quo in the city, as well as help “preserve the secure presence” of Jerusalem’s Christian community.

The Supreme Court had approved the sale of the New Imperial Hotel and the Petra Hotel, which overlook the Jaffa Gate plaza at the entrance to the Old City, as well as another building in the Muslim Quarter. The judges rejected claims by the Patriarchate that the sale was illegal because it was carried out by unauthorized members of the church, and that Ateret Cohaniam had paid bribes to see the deal through.

In their statement, the church leaders called Ateret Cohanim “this radical group” and warned that if the group “manages to evict the protected tenants and take over those properties, Christians and pilgrims would lose their main access to the Christian Quarter of the Old City.”

The ownership dispute began in 2005, when the newspaper Maariv published a report about the sale of the three buildings. The Maariv story rattled the Greek Church and led to the ouster of the Greek Orthodox patriarch, Irenaeus. He claimed that his removal was illegal and insists to this day that he is the patriarch.

“The actions of this radical group do not only mean an assault on the property rights of the Greek Orthodox Church, but an assault on the status quo protections for all Christians in this holy city of Jerusalem and deeply threatens the Christian presence in our beloved Holy Land,” the statement said. The Council of Patriarchs and the church heads in the city supported the appeal to the Supreme Court and continue to support the Greek Orthodox Church in its position in the case, the statement said.

“An attempt to undermine the presence of one church here undermines all the churches and the wider Christian community around the world. We reaffirm our belief that a vibrant Christian community is an essential element in the preservation of Jerusalem’s historically diverse society and a prerequisite for peace in this city; Jerusalem must maintain its multicultural and multi-religious mosaic character, being home to the three monotheistic religions,” the statement added.

Among the signatories to the statement were the Greek and Armenian Orthodox and Latin patriarchs and the bishops of the Coptic, Syrian, Ethiopian and Evangelical Lutheran churches as well as the head of the Anglican Church in the country.