You Are Here: Home → Israel military outdoes itself in a week of violence toward Palestinians

Israel military outdoes itself in a week of violence toward Palestinians 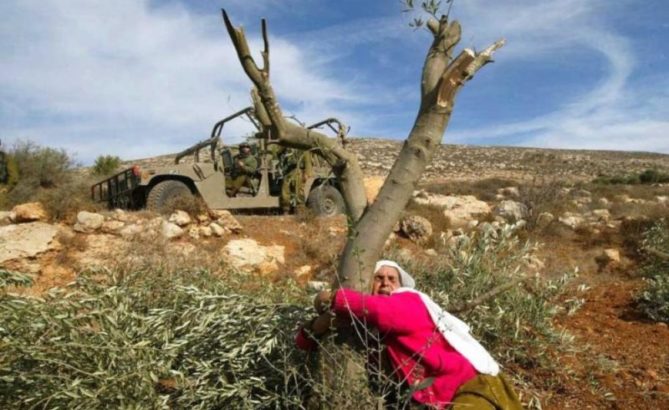 Last Wednesday, Israeli soldiers chopped down more than 100 Palestinian-owned olive trees in the village of Burqin. No reason was given for the destruction.

September 2019, Week 3: Mainstream media does not cover the scores of “small” stories of Palestinian loss of freedom, property, life, and hope. IMEMC brings the stories to us daily. Below are many of the headlines from the past week.

Army Injures Many Palestinians Near Nablus

Soldiers Assault A Child, And Abduct Him, In Al-‘Isawiya

Army Injures Many Palestinians Near Jenin

Israeli Court Approves Use of Palestinian Bodies as Bargaining Chips

A Palestinian family in the Jerusalem-area village of al-Eizariya has been unable to bury their 14-year-old son, who was killed by Israeli police last month.

Nassim Abu Rumi’s family has petitioned Israel’s high court to order the release of his body, which will be reportedly transferred on Friday. Israel will also be transferring the remains of Omar Younis, who died in an Israeli hospital in April after being shot by occupation forces at a West Bank checkpoint.

Dr. Hanan Ashrawi, a member of the Executive Committee of Palestine Liberation Organization (PLO), issued a statement strongly condemning the ongoing field executions carried out by Israeli soldiers on military roadblocks across the occupied West Bank, especially when the soldiers refuse to allow medical treatment to wounded Palestinians, who eventually bled to death.

Her statements came after Israeli soldiers shot and seriously injured a Palestinian woman, identified as Ala’ Wahdan, 28, earlier Wednesday, near Qalandia Terminal, north of occupied East Jerusalem, and refused to allow Palestinian medics to even approach her before she bled to death.

Dr. Ashrawi stated that this policy is a serious and a direct violation of all related international and humanitarian laws…the ongoing executions by Israeli soldiers on military roadblocks have claimed that lives of 65 Palestinians, including 26 children and eight women, since the year 2015.

“This type of brutal behavior reflects the criminal mentality, and the culture of hatred that encourages such cold-blooded executions and extrajudicial assassinations,” Dr. Ashrawi said, “These acts are organized terrorist activities committed by the Israeli army, and reflect Israel’s ongoing disregard of human life, and all related international laws, with the direct and unlimited support American support that also grants it immunity, which encourages Israel not only to continue but also to escalate its crimes and violations.”

Remembering The Sabra And Shatilla Massacre 35 Years On

As part of the Israeli violations of the right to life and bodily integrity, Israeli forces killed a Palestinian woman, who was not identified, at Qalendia Checkpoint at the northern entrance to occupied East Jerusalem, and wounded 78 civilians, including 34 children, 2 women and a journalist at the Great March of Return in the Gaza Strip.

As part of the Israeli incursions and house raids, Israel carried out 82 incursions into the West Bank, including occupied East Jerusalem. 49 Palestinians were arrested, including 8 children and 2 women.  In the Gaza Strip, the Israeli forces carried out 2 limited incursions and levelled agricultural lands along the border fence.  Meanwhile, 7 shooting incidents were reported at the agricultural lands, east of the Gaza Strip.

In terms of the Israeli closure policy, the Gaza Strip still suffers the worst closure in the History of the Israeli occupation in the oPt as it has entered the 14th consecutive year, without any improvement to the movement of persons and goods and ongoing isolation of the Gaza Strip from the West Bank and the rest of the world. Meanwhile, the West Bank is divided into separate cantons with key roads blocked by the Israeli occupation since the Second Intifada and with temporary and permanent checkpoints, where civilians’ movement is restricted and others are arrested. (full report here)