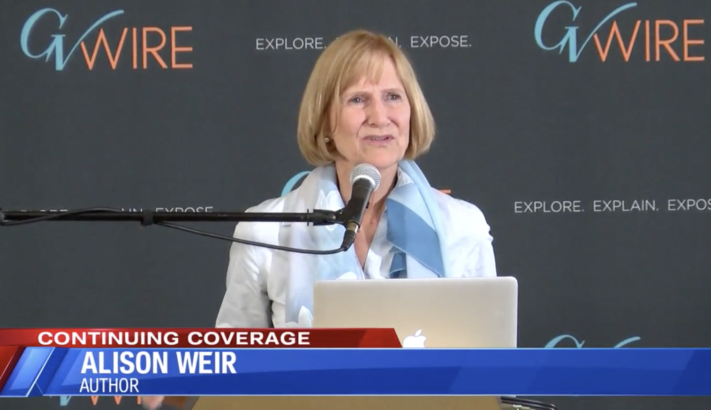 In preparation for Alison Weir’s informative event on the Israeli occupation of Palestine, Fresno CA braced itself for protests that Israel partisans had promised. But the evening was peaceful and educational, with a full auditorium and receptive audience. After the almost 2-hour talk, there was a long line of audience members eager to purchase her book

Wednesday, September 18th, Fresno, California was expecting considerable protest against “controversial” speaker Alison Weir. But instead, not a single protester showed up, and she spoke to a packed hall, receptive audience, and resounding applause. After the talk, there was a long line of audience members eager to buy her book, some purchasing multiple copies.

Controversy had been swirling for at least three weeks around the presentation – a Twitter-breaking, police presence-inducing controversy.

The event, hosted by California media outlet GVWire, was entitled “Uncovered: Israel’s Occupation of Palestine,” and took place at Clovis Community College. According to the speaker, the topic often causes friction, as supporters of Israel’s occupation go on the defensive.

Ahead of time, there had been an intense campaign to block the event. The Anti-Defamation League, the American Jewish Committee, StandWithUs, and the Wiesenthal Center – with combined net assets of over a quarter of a billion dollars – put pressure on Clovis Community College and GVWire to prevent the lecture, accusing Weir of antisemitism, and making an array of personal, fraudulent claims against her. They were joined by a local rabbi and a number of additional Israel partisans disseminating misinformation about Weir.

Alison Weir is no stranger to dissension. In her eighteen years of advocacy work for Palestinians, she has been threatened, heckled, and defamed by Israel partisans. “Some people have strong opinions about the Israel/Palestine issue,” she said, “but too often, opinions are uninformed and even based on falsehoods.”

In the hundreds of lectures Weir has given across the country, she has often experienced resistance, but the run-up to Wednesday’s event was much more hostile than usual.

Articles denouncing the event appeared in news outlets all over the country, and even overseas. Twitter became a battleground as well, with a number of tweets suggesting that if the event went forward, it would be met by a major demonstration: “I’m actively organizing protestors for this vile Jew hater,” and “There will be hundreds.”

A broad coalition in the Twittersphere came to Weir’s defense, with the hashtag #IStandWithAlisonWeir trending, as users all over the world tweeted their support. Users in occupied Palestine itself even joined in: “We are here to support your voice in exposing the crimes of Israel that are striving to hide them from the world…You are the heroine of the Palestinian people,” and “From the smallest part in the world, From the peace and love land, We send our soldiraty to Alison wier and support her and we thanks her efforts for discovering the fact of israel and the crimes that do it daily againist Unarmed Palestinian.”

Alison Weir described the audience as “warm and very receptive.” Afterwards, a long line waited to purchase an autographed copy of her book, “Against Our Better Judgment: the hidden history of how the US was used to create Israel.”

After the lecture, one audience member stated, “The Anti-Defamation League calling her an anti-Semite, all of that’s just rubbish.” Others declared that the carefully documented and cited material presented was a complete surprise to them. One local business leader said, “I had no idea.”

Weir’s work is tailored to just such an audience: “I am willing to have a dialogue with people who disagree with me, but they usually have their minds made up ahead of time, and don’t want to hear the facts. I really enjoy talking to those who are genuinely interested in the truth. Anyone who looks into the issue honestly, learns the facts.”

She adds, “I feel that there is a power to justice and truth that will eventually lead to success…I hope and believe that some people who currently oppose us will be reached and that their humanity will push them to join this movement.”

Weir’s website, If Americans Knew, states, “We believe all people are endowed with inalienable human rights regardless of race, religion, ethnicity, sexuality, or nationality. We believe in justice, fairness, and compassion and in treating all human beings with respect, empathy, and in the manner in which we would wish to be treated.”

A few If Americans Knew supporters had driven long distances to attend the event. One man had come down from Oregon, and another who was visiting family in Nebraska had hurried home to Fresno in order to hear Weir in person.

Below is one of several local television news reports about the event:

(The 5-minute video Weir showed at the beginning of her talk can be viewed here. Weir’s entire talk is on the GV Wire Facebook page.)